Prenatal gross morphologic, morphometric and histologic developmental features of the dromedary spleen were studied. The dromedary gestation period (13 months) was categorized into four (1-4) phases and ten developing spleens per growth phase were sampled. Splenic topographical anatomy was noted before being eviscerated from each foetus. Morphologic and morphometric features of the eviscerated spleens were immediately documented and 2 – 4 mm thick samples were collected for histological analysis. The developing spleen was dark brown in colour, semilunar shaped and significantly increased (p<0.05) in size and weight across the four phases of prenatal development. The full-term dromedary spleen was observed tohave unique histological features. Its capsule had an inner smooth muscle and an outer predominant connective tissue layer.The pumping of stored blood from the muscular capsule and trabeculae was proportionate to the body’s requirement. The
splenic venous return was characterized by blood flow from the red pulp (venous sinusoids) to the peritrabecular sinuses, subcapsular sinuses and finally to the splenic veins. The dromedary has a sinusal type of spleen and has both open and closed types of circulation. The presence of closed circulation and absence of marginal sinus could be the reason for dromedary main health problems of blood parasites; Trypanosoma evansi. It was concluded that most of the salient features of the postnatal spleen were already evident in the first growth phase and became developed by the second phase. Other growth phases were mainly characterized by increase in sizes.

The spleen is the largest lymphoid organ (1). It is situated in the abdominal cavity directly caudal to the diaphragm and dorsal to the rumen. Its major function is to filter blood in mammalian body systems and plays an important role in hematological and immunological functions (1, 2). In the adult camel, the spleen is semilunar shaped (3). It has a thick ventral line and a thin cranial line, located over the dorsal sac of the rumen, and extends to the caudal part of the kidney (4). It has a thick capsule of 292 ± 106 mm and weighs 5.5 to 6.6 kg (3, 4).
The mammalian spleen is surrounded by a fibrous (capsular) connective tissue from which originate the trabeculae that support the major vessels. Lymphoid tissue sheaths the minor branches of the splenic arteries to form the white pulp. Contrary to this, in rodents, the minor arterial branches terminate at the marginal sinuses. The marginal sinuses form the spaces between the white splenic pulps and the surrounding marginal zones. Whereas, others pass through the marginal zones to form the venous system of the blood-filled sinuses (red pulp) (2).
Though many prenatal development studies have been carried out on camel organs (5, 6), only sketchy information on the prenatal development of the camel spleen are available. There appears to be none, to the best of our knowledge, that is related to the sequential changes in the developing camel spleen. Available information on camel spleens has been on the adult spleen (4, 7). This study was aimed at providing baseline data on prenatal gross developmental features and histogenesis of the dromedary spleen, as well as towards updating available literature in these aspects.

In an adoption of earlier categorization by Jaji et al. (8), the dromedary gestation period (of 13 months) was categorized into four (I-IV) phases for this study. Morphologic and morphometric aspects of the work were carried out at the Maiduguri Metropolitan Abattoir, Maiduguri, Nigeria. A total of 10 developing spleens from 10 apparently normal foetuses from each phase of gestation of dromedary cows were studied. Following excision from foetal carcases, the weights (in grams, g) and dimensions (length and breadth, in centimetres, cm) of the developing spleens were measured, using a Harvard trip weighing balance (Citizen® with 0.1 g – 100 kg range) and butterfly® measuring tape (0.1-150 cm) respectively. The length was its longitudinal length including the crescent curves, while the breadth was the distance between the dorsal and ventral parts across its longitudinal axis. Means were separated by Tukey HSD test at a significance level of p<0.05.
The developing dromedary spleens were obtained after humane bleeding to death of dromedary cows. This might have an effect on the sizes of the spleens measured, as earlier observed by Zidan et al. (4).
Sampling and processing
About 2 – 4 mm thick tissues were taken from the developing spleens at each prenatal growth phase. These samples were immediately fixed in 10% buffered formal saline, then processed using the paraffin method and sectioned to 4 µm thickness sections on histological slides, as adopted from Mahre et al. (9). The tissues sections were stained in Haematoxylin and Eosin and later observed and captured at ×20 and ×40 magnifications of the Motic Compound Microscope BA410 (Causeway Bay, Hong Kong).
Statistical analysis
The data was analyzed using statistical software GraphPad Prism version 5.00 for Windows. The data was expressed as mean ± standard deviation. Differences between group means across the phases of development were analyzed by one way Analysis of Variance with Turkey’s Post hoc test. Differences were statistically significant when p < 0.05.

Morphology and morphometry of the developing dromedary spleen
The prenatal dromedary spleens were observed to be dark brown in colour and semilunar shaped (Fig. 1). They were located ventrocaudal to the diaphragm, as an attachment on the left craniodorsal aspect of the rumen.
The first phase foetal spleen measured 7.3 ± 2.4 cm in length, 2.6 ± 0.6 cm in breadth, and 6.5 ± 4.0 g in weight (0.2% relative to the body weight). Most of these dimensions showed significant increases across the four phases of prenatal development of the dromedary spleen (Table 1). At the last phase of gestation, the developing spleen (Fig. 1) was found to be firmly attached to the stomach by connective tissues. The developing spleen was attached not to the diaphragm, but high in the left side of the rumen by its front lower surface. It was semilunar shaped and wider at the rear end than the front. 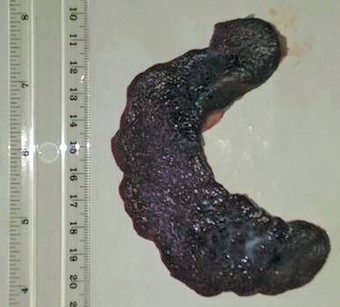 First growth phase (2-4 months)
The capsule was characterized by an outer (loose/dense irregular connective tissues with early developing stages of blood and lymphatic vessels) and inner (smooth muscle) layers (Fig. 2). The subcapsular sinuses were evident, but the peritrabecular sinuses were not yet formed. The capsule, through its inner smooth muscle layer, was continuous with the trabeculae septae as the trabeculae and radiated the splenic parenchyma (Fig. 2). Red pulp and white pulp areas were barely separated, but red pulp areas predominate (Fig. 2). Lymphoid nodules had started forming in the white pulp areas,while reticular fibre layers were seen to demarcate them from the marginal zone. Penicilliary arteries (the sheathed arteries associated with blood sinusoids) were established. These were intricate and overlapped the Periarterial lymphatic sheaths (PALS) into the red pulp, then directly into the sinusoids. At the red pulp, vascular trabeculae were seen with no associated sinuses. 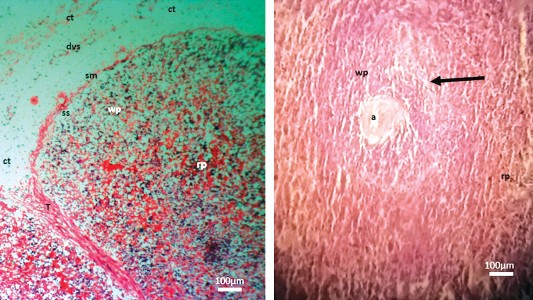 Figure 2. Micrographs depicting the capsule (A) and parenchyma (B) of the prenatal dromedary spleen at the first phase (2 – 4 months) of development. Note that the spleen was observed to be encapsulated by an outer blend of loose and dense irregular connective tissue (ct) with developing blood and lymph vessels (dvs) and an inner smooth muscle (sm) sheaths separated from the parenchyma by a subcapsular sinus (ss). The trabeculae (T) were formed and had extended into the parenchyma. However, the peritrabecular sinuses were yet to be formed. The red pulp (rp) and white pulp (wp) areas were separable. The splenic artery (a) of the white pulp was surrounded by lymphocytes of the periarterial lymphoid sheath (PALS). Reticular fibre layers were seen to demarcate them from marginal zone (arrow). (H&E; x100 (A); x400 (B); bar=100μm) 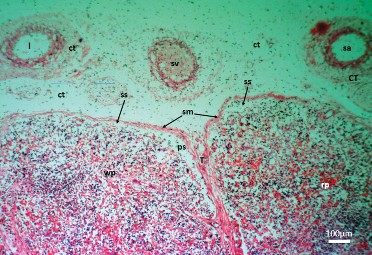 Figure 3. Micrographs depicting the capsule and parenchyma of the prenatal dromedary spleen at the second phase (5–7 months) of development. Note that the splenic capsule continued development. It was observed to be encapsulated by an outer loose/dense irregular connective tissue (ct) (vascularized with lymphatic vessels (l), small veins (sv) and arteries (sa) and an inner smooth muscle (sm) sheaths separated from the parenchyma by a subcapsular sinus (ss). The trabeculae (T) were formed and had extended into the parenchyma, the peritrabecular sinuses (ps) were well developed. The red pulp (rp) and white pulp (wp) areas were separable. (H&E; x100; bar=100μm)

Second growth phase (5-7 months)
The capsule continued development, now vascularised with blood and lymph vessels. The white pulp had lymphoid nodules aggregations and showed blood vessels (Fig. 3). Reticular fibres were observed to demarcate them from the marginal zone, but not from the splenic red pulp. The Marginal zone could not be differentiated from the red pulp. The red pulp showed vascular trabeculae with no associated sinuses. Avascular trabeculae had started showing sinuses (Fig. 4). 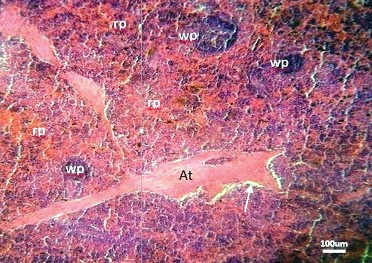 Figure 4. Photomicrographs of the prenatal dromedary spleen at the second phase (5–7 months) of development. Note that peritrabecular sinus (Arrow) had started forming around the avascular trabeculae (At). The parenchyma had red pulp (rp) and white pulp (wp) areas. (H&E; x100; bar=100μm) 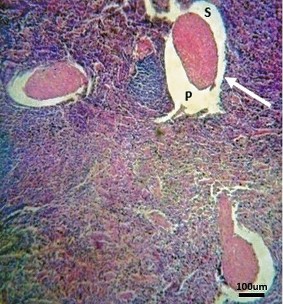 Figure 5. Photomicrograph of the the spleen of a fourth phase (11–13 months) dromedary fetus depicting componrnts of its avascular trebeculae. Note that the avascular trabeculae have primary (P) and secondary (S) parts separated by peritrabecular sinuses (Arrow) (H&E; x100; bar=100μm)

Conclusively, most of the salient gross and histologic postnatal features of the dromedary spleen are already evident in the first prenatal growth phase and are established during the second growth phase. Other growth phases are characterized mainly by increase in sizes.

This was a collaborative study between the Faculties of Veterinary Medicine of two Nigerian universities, the University Maiduguri and the University of Ilorin. We duly appreciate the support of the managements and the technical staff of these faculties and the management of the Maiduguri Metropolitan Abattoir, Maiduguri, Nigeria, for their kind support.

© 2019 Saidu A.S. This is an open-access article publishedunder the terms of the Creative Commons Attribution License whichpermits unrestricted use, distribution, and reproduction in any medium,provided the original author and source are credited.