The vascular endothelial growth factor (VEGF) is a multifunctional cytokine stimulating the growth of vascular endothelial cells, survival and proliferation, inhibiting apoptosis. It is one of the most potent stimulants of vascular permeability. VEGF is found at high levels in inflammatory and tumour-associated pleural and abdominal effusions and is involved in their occurrence. In the present study, the blood plasma and abdominal fluid VEGF levels were assayed in thirty-one client-owned dogs with neoplastic and non-neoplastic diseases by means of enzyme-linked immunosorbent assay (ELISA). The VEGF concentration in abdominal fluid of dogs (n=6) with ascites was 190.70±34.35 pg/ml, in dogs (n=6) with peritonitis: 1449.81±365.42 pg/ml and in dogs (n=9) with tumour-associated effusion: 1993.13±202.56 pg/ml. Blood plasma VEGF of healthy dogs (control group, n=10) was 36.79±5.72 pg/ml, in dogs with ascites: 57.92±2.88 pg/ml, in dogs with peritonitis: 76.98±7.24 pg/ml and in dogs with tumour-associated effusion: 173.50±40.9 pg/ml. There were substantial differences between blood plasma and abdominal fluid VEGF levels.

The vascular endothelial growth factor (VEGF) is a glycoprotein with strong mitogenic activity on endothelial cells. It mediates the inhibition of some apoptosis mechanisms and thus, enhances cell survival (1, 2). It increases vascular permeability (3). VEGF is one of the most potent and earliest inductors of physiological and pathological angiogenesis and lymphangiogenesis (1). Its role in oncogenesis has been confirmed in various types of tumours in humans (4, 5, 6) and in dogs (7, 8, 9). In healthy adults, physiological VEGF production is limited to wound healing and the female reproduction cycle (10, 11). Researchers have reported high levels of VEGF in inflammatory and tumour-associated peritoneal and pleural fluid in humans (12, 13, 14). Similar studies in veterinary medicine, in particular in dogs, are limited (3, 15, 16), which was the incentive for the present study. 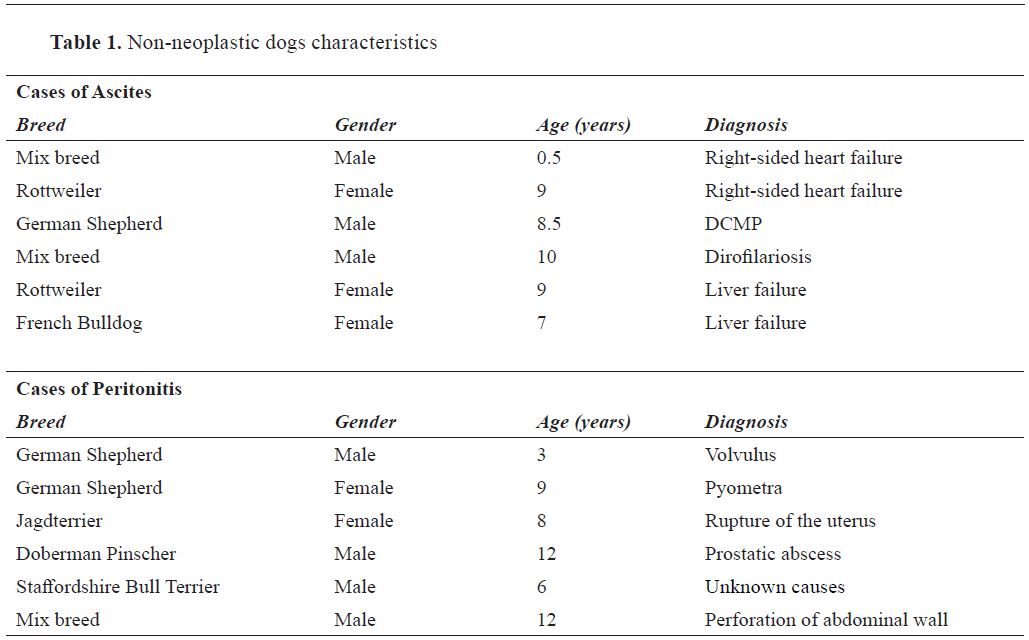 All dogs with malignancies were with histopathologically confirmed diagnoses.
The blood samples from all dogs were collected by venipuncture of v. cephalica antebrachii in standard heparinised containers. Blood plasma for VEGF determinations (pg/ml) was obtained by centrifugation (5000 x g; 30 min) of freshly collected heparinised blood.
Abdominal fluid samples were obtained with paracentesis, using a sterile needle (18G) and a syringe (5ml). The dogs were in lateral recumbency, the fur was removed and the skin was treated twice with disinfectant (5% iodine tincture). We punctured the ventral abdominal wall, midway between the umbilicus and the xiphoid verruca of the sternum, about 1-2 centimeters from the linnae alba. Immediately after collection, fluid was centrifuged (5000 x g; 20 min). The supernatants were separated and stored at −20oС until analysis. Blood plasma and abdominal fluid VEGF determinations were done with Quantikine Canine VEGF – ELISA (R&D Systems, Inc. USA, Catalog Number CAVE00) of Tecan Sunrise ELISA reader (Tecan Group Ltd., Männedorf, Switzerland) and Magellan™ - data analysis software from Tecan.
Statistical analysis of data was performed with Statistica v. 6.1 software (StatSoft Inc., 2002). Data were submitted to ANOVA, followed by Student- Newman-Keuls test. Data are presented as mean and SEM, at a level of significance p<0.05.

RESULTS
The results from the blood plasma VEGF determinations are presented in Table 3.
Blood plasma VEGF of healthy dogs and dogs with either ascites or peritonitis were not statistically significantly different. Plasma VEGF levels in dogs with malignancies were substantially higher than those of healthy dogs (р<0.001); also, they exceeded average levels in dogs with ascites (р<0.01) and peritonitis (р<0.05).
The results from the abdominal fluid VEGF determinations are presented in Table 4.
As expected, in abdominal effusions VEGF levels in transudate were the lowest (190.70±34.35 pg/ml). Transudate VEGF concentration varied from 127.55 tо 229.88 pg/ml and only in one patient attained 345.07 pg/ml. Average VEGF level in exudate was considerably higher: 1449.81±365.42 pg/ml, with relevant differences vs transudate levels (р<0.01). The lowest measured value in exudate was 294.7 pg/ml, while the maximum:
2500.0 pg/ml. Only in two dogs, exudate VEGF did not exceed 1400 pg/ml. In dogs with tumour- associated peritoneal effusion, VEGF was with highest levels: 1993.13 ± 202.56 pg/ml, which were substantially different to concentrations in transudate (p<0.001). Although tumour-associated fluid has significantly higher VEGF levels (≈ 30%) than exudate, measured average concentrations were not statistically significantly different. At the same time, in all dogs with malignancy associated abdominal effusion, VEGF levels were over 1100 pg/ml, and in 5 out of all 9 dogs (55.55%) VEGF exceeded 2000 pg/ml.
The ratio of abdominal VEGF to blood plasma VEGF was the highest in dogs with peritonitis (21.47±6.30), followed by ratio in dogs with malignancies (14.48±2.89). In dogs with ascites, the ratio was considerably lower (3.29±0.52).

The exact origin of circulating vascular endothelial growth factor is a subject of controversy. It is confirmed without any doubt that many tumour types could produce their own VEGF. Also, blood plasma VEGF are directly related to tumour histology (higher levels in malignant and aggressive tumours) and metastasizing (17, 18). Our results agree with these facts. High blood plasma concentration of circulating VEGF are due to enhanced gene expression, production of the growth factor by tumour cells and the effect of inflammatory cytokines released consequently to neoplastic growth infiltration (19).
The present study confirmed the presence of VEGF in abdominal fluids of different origin. The average level of VEGF in tumour-associated peritoneal fluid was about tenfold higher than levels in ascitic fluid of non-oncological patients. On the other hand, there was not a significant difference between peritoneal VEGF levels in dogs with malignancies and dogs with peritonitis. This data is comparable to those of certain researchers (20, 21), but not to others (16). Corresponding to another similar report (16), we also found out that abdominal fluid VEGF exceeded many times levels in corresponding blood samples. This proves the local accumulation of VEGF in abdominal effusions of various origins. The difference between plasma and peritoneal levels was the lowest in animals with ascites (2 to 5 times), whereas in most dogs with malignancies and inflammatory non-neoplastic diseases the difference is about or over 10 times.
The question regarding the appearance and the role of VEGF in the formation of peritoneal and pleural effusions in patients with and without tumours is disputable. Tissue hypoxia (in inflammations or congestive states) is one of the key factors initiating VEGF synthesis. Increased VEGF production enhances angiogenesis, which resultantly increases tissue perfusion as well as vascular permeability (22). The stimulating effect of various proinflammatory cytokines and growth factors as transforming growth factor alpha(TGF-α), tumour-necrotizing factor (TNF-α), interleukin-1 and interleukin-6 (IL-1, IL-6), insulin-like growth factor 1(IGF-I), prostaglandins Е1 and E2 (PG-Е1, -E2), cyclooxygenase-2 (COX-2) etc., is also relevant for VEGF synthesis in inflammatory states (23, 24). Last but not least, the immediately tumour- produced VEGF released in the circulation and sometimes, directly in the abdominal fluid, should be taken into consideration. The complex effect of these mechanisms in diseases accompanied with abdominal effusion, leads to increased local production of VEGF in the abdominal cavity in a variety of disease states. The extent of involvement and the activity of mentioned factors (hypoxia, cytokines, tumour secretion) in our view are at the background of differences in abdominal fluid VEGF concentrations in congestive, inflammatory and malignant diseases. On its part, the produced VEGF has a direct influence on the formation of pleural and peritoneal effusions through enhanced permeability of blood vessels. The effect of VEGF on vascular permeability is about 50,000 times stronger than that of histamine (23).
The concentration of VEGF in peritonitis abdominal fluid was far higher than levels in non- inflammatory ascitic fluid (1449.81±365.42 pg/ml vs 190.70±34.35 pg/ml). Тhis could indicate that the effect of proinflammatory cytokines is multiple times more potent than that of local tissue hypoxia for triggering VEGF synthesis. In malignancy- associated effusion, the combined effect of local tissue hypoxia (due to circulatory troubles), inflammatory cytokines (in tumour infiltration) and tumour- synthesized VEGF is involved.

The levels of vascular endothelial growth factor in blood plasma and peritoneal effusion in oncological canine patients are extremely high compared to those in dogs with ascites. This could be used as an additional diagnostic approach. High VEGF levels (>2000 pg/ml) in abdominal fluid are more likely to indicate neoplastic origin of the effusion. Additional research is necessary to elucidate the importance and role of VEGF in abdominal fluid of dogs with oncological and non- oncological diseases.

This study is financially supported by Faculty of Veterinary Medicine, Stara Zagora, Bulgaria and Ministry of Education and Science, Republic of Bulgaria. The results presented in this paper are a part of a project.

© 2019 Hristov T. This is an open-access article publishedunder the terms of the Creative Commons Attribution License whichpermits unrestricted use, distribution, and reproduction in any medium,provided the original author and source are credited.