This paper evaluates possible relations between the clinical activity and the histopathological findings of the entire intestine in dogs with inflammatory bowel disease (IBD). To perform this study, hospital records of 64 dogs of different sex and breed diagnosed with IBD were evaluated. The results of this study did not show a statistically significant correlation between clinical activity and the histopathological assessment of dogs with IBD. Certain connections were found between diarrhea and lacteal dilation in duodenum, and hematochezia and villous epithelial injury in colon but no other associations were found between the rest of the lesions and symptoms.

Canine inflammatory bowel disease (IBD) is a chronic gastrointestinal disorder of unknown cause and ill-defined pathogenesis (1). It is characterized with a diversified group of intestinal disorders with inflammatory infiltration of the mucous membrane in the lamina propria area (2, 3, 4, 5, 6). Clinical signs are highly variable (1), and these go from diarrhea and vomiting to appetite disturbance (anorexia, polyphagia) (7). The intensity of the disease may differ considerably among patients, depending on the localization and extent of affected regions of the gastrointestinal tract (1, 8), as a reflection of segmental or diffuse mucosal inflammation (9). Clinical findings according to the site of disease are different, and the design of specific indexes has demonstrated to be useful (7, 11, 12). Therefore, over the past two decades, some research groups have developed different classification systems (1, 8). Nonetheless, even with standardized grading schemes, most studies do not support a correlation between the severity of clinical signs and histological score since findings interpretation may vary widely between pathologists (10, 13). Despite this fact, the numeric index generated by some of these methods has been used to help clinicians and researchers to correlate inflammatory lesions with clinical signs (1). Thus, Jergens et al. (1) proposed a set of assessment criteria called the Canine Inflammatory Bowel Disease Activity Index (CIBDAI). The suitability of this index as a monitoring tool is determined by the correlation between the clinical index and the histopathological lesions(1).
Interestingly, recent reports have suggested that the histopathological criteria for the diagnosis of GI tract inflammation in dogs and cats may be inconsistent (10). Due to these concerns, the World Small Animal Veterinary Association (WSAVA) 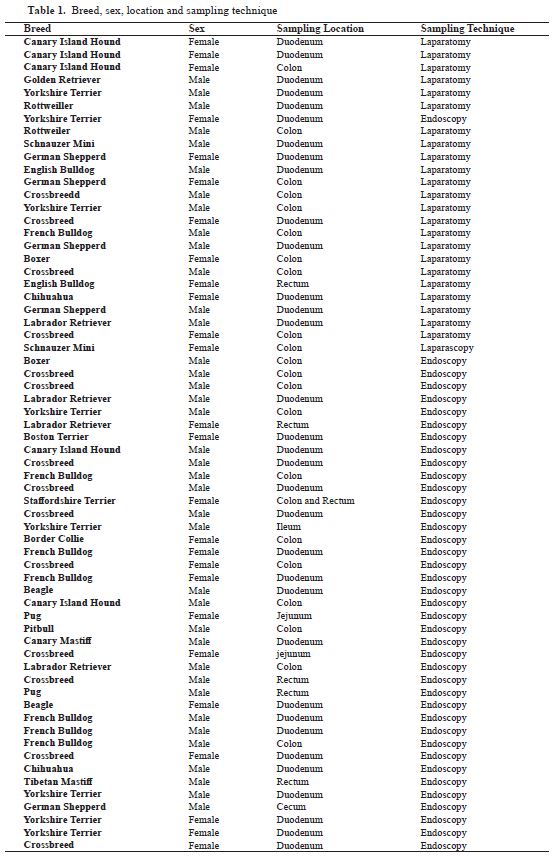 Gastrointestinal Standardization group developed a histology monograph that pictorially and textually defined inflammatory and morphologic features in endoscopic biopsy specimens obtained from the stomach, duodenum, and colon (10). However, due to the particular individuality of IBD disease, there is a sparse number of reports defining the severity of clinical signs in dogs with IBD and its relation with histological lesions (14).
Therefore, this study is aimed to the presence or absence of histological changes compared to clinical signs to avoid the particular individuality observed in dogs with IBD.

This retrospective study included hospital records of 64 dogs of different sex and breed diagnosed with IBD in the Small Animal Hospital of Las Palmas de Gran Canaria University (Canary Islands, Spain) (Table 1).
This study was conducted from April 2015 to August 2018 following the approval of the Ethical Commission of Veterinary Medicine of Ethical Commission of Veterinary Medicine of Las Palmas de Gran Canaria University (agreement MV-2017/05). Criteria for animal selection were: clinical signs consistent with IBD such as anorexia, vomiting, diarrhea and weight loss (>3 weeks in duration), failuretorespondtodietary(commercially prepared select antigen or homemade diets) or symptomatic therapies alone, exclusion of other causes such as exocrine pancreatic insufficiency, infectious agents, endoparasites, neoplasias or food and antibiotic responsive enteropathies; and histological evidence of mucosal inflammation in biopsy specimens following the pattern related to IBD bibliography data index evaluation (10). Seven animals that were free of gastrointestinal signs over one or more clinical examinations, and showed normal hematological and serum biochemistry analyses, as well as free of parasites on fecal examinations, were excluded from the analysis and used as control groups (Table 2a, b). Mucosal biopsies of the gut were also obtained from these dogs as previously described in other studies (4, 8).

Clinical disease activity data
To evaluate the clinical disease activity of our patients, a retrospective assessment was performed following symptoms of the upper gastrointestinal part such as vomiting, diarrhea, anorexia (as appetite disorders) and weight loss, as well as symptoms of lower gastrointestinal signs such as hematochezia and mucoid feces.

Histologic examination
To perform the histological assessment, samples from the small and large bowel of diseased dogs were used. It was based on the morphological and inflammatory findings identified in the standard 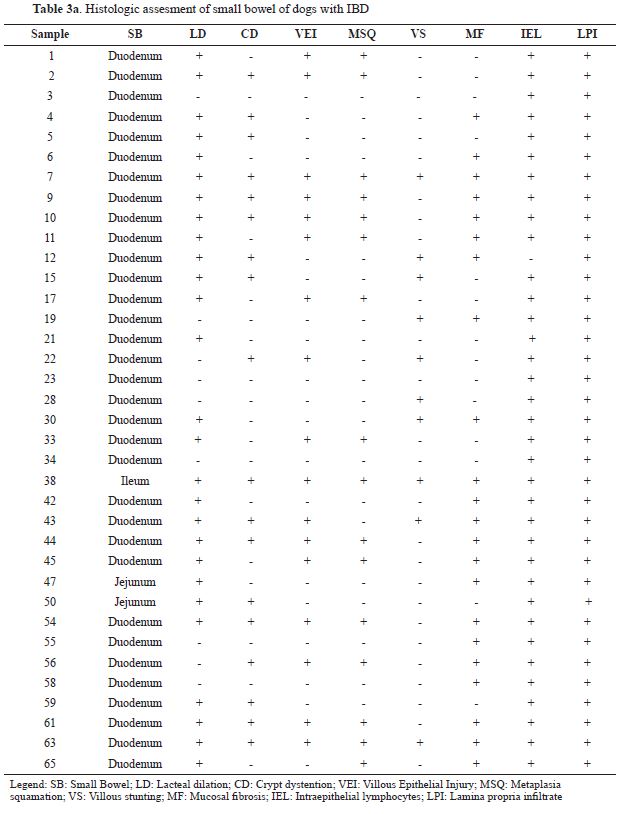 Statistical analysis
For all the dogs involved in the research and each one of the subgroups considered (presence/ absence of lesion), lesions and clinical signs were categorical variables summarized as frequencies and percentages. These percentages were compared using the Chi-square test. Statistical significance was set at p<0.05. Only dogs with IBD in duodenum and colon were considered since these locations were the most commonly found in the dogs studied.

Clinical signs and histological lesions of 64 animals of different breed and sex with IBD are showed in Tables 3a, b and in Tables 4a, b. Breeds 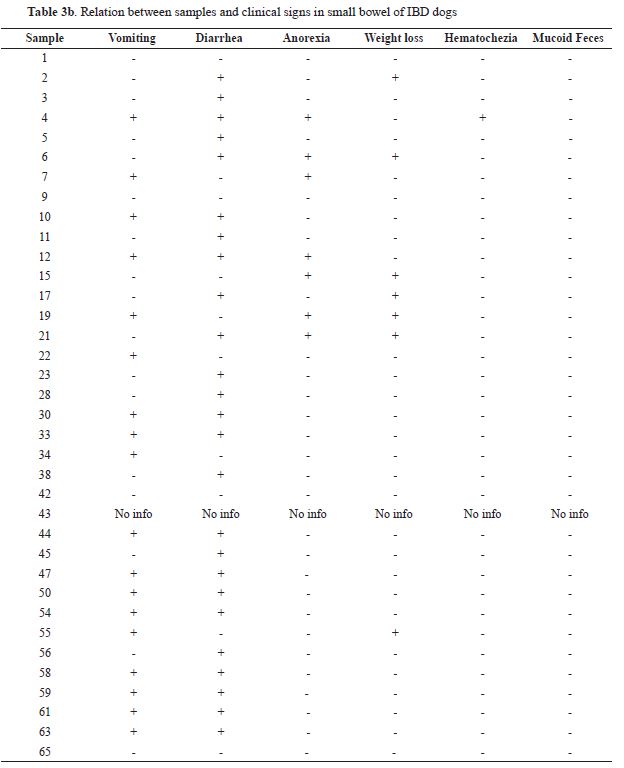 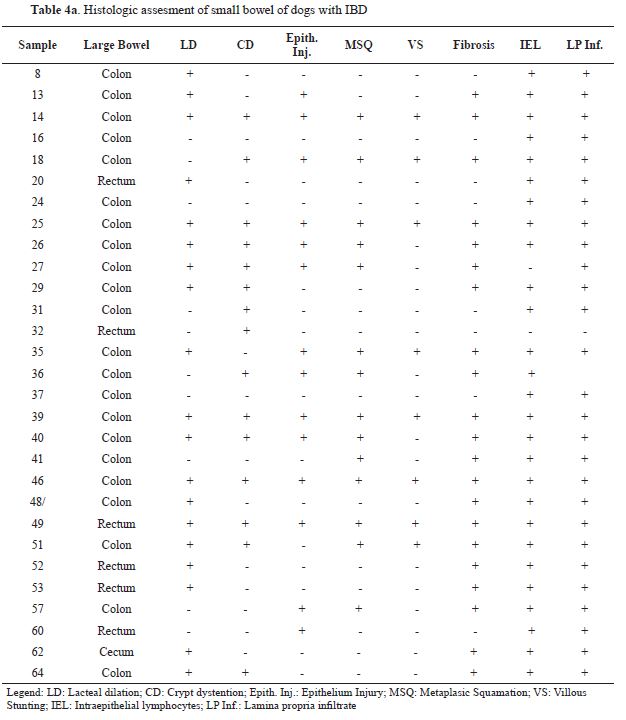 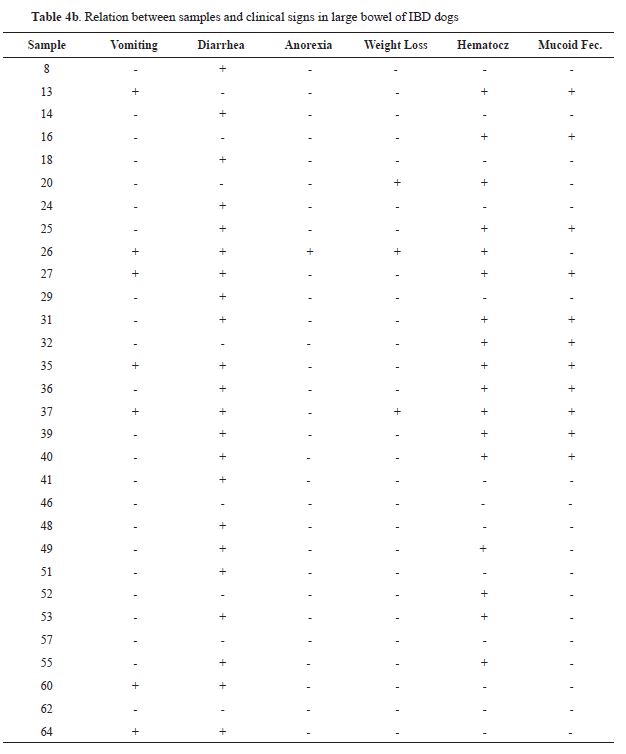 patients showed highly variable histological lesions. Therefore, according to the WSAVA guidelines, lacteal dilation was found in 46 out of 65 animals, crypt distention in 33 out of 65 animals, 30 animals showed villous epithelial injury, metaplastic desquamation was found in 30 out of 65 animals, villous stunting just in 18 animals, and mucosal fibrosis in 43 animals in total.
The cellular infiltrate in all mucosal specimens was predominantly composed of lymphocytes and plasma cells, sometimes accompanied by an admixture of sparse numbers of eosinophils, neutrophils, and macrophages. Only one out of
65 animals showed a predominant eosinophilic infiltrated. The statistical analysis revealed certain connections between diarrhea and lacteal dilation in the duodenum, and hematochezia and villous epithelial injury in the colon. The results of this analysis are shown in Tables 5 and 6. No significant associations were identified among the rest of the lesions and clinical signs.

Literature defining clinical and histopathological indexes to value the activity of the chronic inflammatory bowel disease is scarce. The assessment of clinical severity in dogs with IBD is difficult due to the absence of specific symptoms. Most of the clinical signs reported in our study have also been shown in other studies on IBD that used the CIBDAI (1, 7). Previous studies have based their analysis on the intensity of different clinical signs (1), however, in our research, the intensity and degree of disease was ignored. Hence, this study was focused on the presence or absence of injury, avoiding interpretative ambiguity among pathologists, as has been suggested by WSAVA new guidelines (10). These subjective elements that do not always represent the existing inflammatory burden could lead to discordance between the results of different surveys using CIBDAI (14).
Recent studies have shown that characterized the extent and severity of gastrointestinal inflammation in intestinal biopsies from dogs and cats is hard. Different circumstances can interfere with the histopathologic interpretation of intestinal samples such as the correct area of the GI tract to be sampled, the quality of tissue samples analyzed and the lack of consistency in interpretation of histopathologic changes among pathologists (14, 15, 16). Due to these circumstances, the WSAVA GI Standardization Group developed a histopathologic template to avoid these concerns. Even so, important variations have been observed in the diagnostic interpretation of intestinal samples with the use of WSAVA standardization criteria or the simplified histopathologic scoring system used by Jergens et al. (10), because the above-mentioned methods did not include evaluation of all intestinal segments.
This study was mainly based on the simplified histopathologic scoring system (10), but extending its use to other sections of the GI tract. Interestingly, its use did not show significant differences in the evaluation of the intestinal samples done among pathologists. Therefore, this simplified histopathologic scoring system can be quite valuable to evaluate animals with IBD. Identical results were obtained in recent studies that used a similar scoring system (14).
The histopathological lesions of the present study showed significant fibrosis associated with major damage to the mucous membrane of the small and large intestine. Similar features were observed in other studies done in animals with severe IBD but only were described in small intestine (6). In the present study, we have observed many similarities between the inflammatory response in the small and large intestine. Comparable findings were described in other studies (9, 10, 14) that showed better clinical evaluation without doing a distinction between upper or lower intestine. Therefore, features such as metaplastic changes observed in small and large intestine of almost half of the animals of our study could be considered a pathological finding of importance as a precursor of epithelial dysplasia and dysplasia- associated lesions or masses in idiopathic inflammatory bowel disease associated to intestinal cancers in humans (17). However, to date, this relation has not been well studied in domestic animals.
Besides, some authors suggest that the presence of increased numbers of lymphocytes deposited in the lamina propria and their contribution to the IBD process are better explained when the intestine is checked as a big picture (8). Nevertheless, recent studies performed in dogs did not show a predominant cytokine profile in the inflamed colonic mucosa in dogs with lymphoplasmacytic colitis or enteritis as it happens in people (18).

The histopathologic scoring system used in this study provided important information on the extent of mucosal inflammation in the GI tract of dogs with IBD. However, this work also proposes that the evaluation of inflammatory bowel disease can be complicated, especially with the use of retrospective records of archived intestinal biopsies and subjective clinical and histologic decisions. Furthermore, another important limitation is related to the difficulty of matching breed and age of control animals with IBD dogs since it is a retrospective study design. To perform better results, it is important to evaluate outcome factors as an accurate assessment of the health status of patients as suggest reports on human chronic disease (19). All these premises would be of great help in the uniformity of a standard for the treatment, evaluation, and monitoring of the inflammatory bowel disease.

The authors wish to express their great appreciation to Marisa Mohamad and Jamal Jaber for their constructive comments.

© 2019 Farray D. This is an open-access article published under the terms of the Creative Commons Attribution License which permits unrestricted use, distribution, and reproduction in any medium, provided the original author and source are credited.