The present study aimed to evaluate whether the induction and the formation of an accessory corpus luteum (CL) after AI might increase the pregnancy per AI (P/AI) in heat stressed dairy cows. Starting at d 50±3 post-partum, 113 lactating Holstein cows from one commercial herd during summer were scored for body condition, blood sampled and examined by ultrasound. Those bearing a CL>25mm and progesterone (P4) level>2ng/mL were synchronized using a double PGF2α injection given 12 h apart and AI-ed at detected estrus. In total 18 cows, there were not any signs of estrus (n=10) nor a P4 level <2ng/mL at the time of enrolment (n=8) and therefore they were excluded from the study, leading to 95 cows finally enrolled.. At d5 post-AI, cows were randomly allocated into 2 groups: control group (CON, n=45) without any additional treatment, and treatment group (GnRH, n=50), treated with 0.008 mg Buserelin – a GnRH agonist. Blood sampling and ultrasound examination were done at d5, d14 and at d21 after AI, whereas the pregnancy diagnosis was done at d21 and d30 after AI. Average daily temperature and relative humidity values were used to calculate the temperature-humidity index (THI). The average THI during the experiment was 79.5±0.6. At d5, no differences were observed neither between the number of the CL nor between the P4 level in both groups. At d14 and d21, 82% of the GnRH-treated cows had more than one CL versus 0% of the CON cows. Both at d14 and 21, GnRH-treated cows had higher P4 levels compared to the CON cows (p<0.05). In addition, P/AI were higher in the GnRH group than in the CON group (65% vs. 48.3%, p<0.05), whereas late embryonic losses were higher in CON in comparison to GnRH cows (10.6 vs. 4%, respectively). The BCS at the moment of insemination did not affect P/AI (p>0.05). In conclusion, the induction of an accessory CL at d 5 after AI might increase P/AI in heat stressed dairy cows.

Heat stress adversely affects fertility of dairy cattle and compromises the reproductive function of the lactating dairy cows. Reduced expression of estrus (1), disruption of follicular and oocyte function (2), increased embryonic mortality (3) and reduced P4 concentration (4) are the key events associated with reduced reproductive functions during heat stress. Indeed, one often observed characteristic of cows chronically exposed to heat stress is a reduction of the circulating P4 concentration (4). Because P4 is an essential hormone for pregnancy maintenance, its reduction leads to decreased fertility. Therefore, many researchers have been focusing on identifying hormonal treatments that increase the P4 level in heat stressed cows. The main focus has been put on P4-releasing intra- vaginal devices (PRID) or controlled internal drug releases (CIDR) and on the ovulation-inducing products such as gonadotropin releasing hormone GnRH or human chorionic gonadotropin – hCG, (through induction of ovulation and formation of an accessory CL in cows bearing a CL). In this respect, an injection of hCG on d 5 of the estrous cycle did not improve the proportion of heat stressed cows to become pregnant after AI (5, 6) whilst Beltran and Vasconcelos (7) reported a significant improvement in fertility. Similarly, treatment with GnRH at AI in cows exposed to heat stress conditions did not affect the P/AI (8), whereas treatment with GnRH at AI and at AI and 12 days later, improved fertility compared to non-treated controls (30.8%, 35.4%, and 20.6%, respectively) (9). In addition, treatment with GnRH on d 5 after AI increases P/AI, but this effect was only observed in third lactating dairy cows (8), whereas injection of GnRH at days 14 – 15 after estrus to delay luteolysis did not generally affect fertility (10). Friedman et al. (11) showed, although not significantly, that CIDR treatment increases the conception rates by 6%, however, the treatment significantly increased the conception rate in cows with low BCS after calving. Even though, treatments during heat stress may offer some promise to improve fertility, reported results are so far rather inconsistent.
We hypothesized that an early elevation of the P4 level after AI in heat stressed cows would result in an increased P/AI. Thus, the objective of the present study was to examine whether the induction and the formation of an accessory CL post-AI would increase the P4 level and consequently improve P/AI in dairy cows during heat stress conditions.

Lactating Holstein cows (n=113) from one commercial herd during the summer season (July- September 2018) were enrolled in the study. Cows were housed in free-stall barns equipped with fans, fed a totally mixed ration once daily to meet or exceed requirements for lactating cows and were milked twice daily with an average milk production of 7500 l for 305 days. At 50±3 days post-partum, all cows were examined by ultrasound and scored for body condition (BCS) on a scale from 1-5 (1-emaciate - 5-obese) (12). The cows that were bearing a CL larger than 25 mm and that had a P4 level > 2.0 ng/ml were further synchronized using a double PGF injection [(2 ml (0.5 mg cloprostenol), PGF Veyx Forte, Veyx-Pharma GmbH, Germany)] given 12 h apart and were AI-ed at detected estrus. Ten cows did not show behavioural estrus signs and therefore 2wα ere excluded from the study. In addition, 8 cows had a P4 level less than < 2 ng/mL, regardless of having a CL and were also excluded from the analysis leading to 95 cows at total enrolled in the study. Subsequently, at d 5 post-AI cows were randomly allocated into 2 groups: the control group (CON, n=45), without any additional treatment, and the treatment group (GnRH group, n=50), treated with 0.008 mg Buserelin – a GnRH agonist (Receptal, Animal Health Ltd, New Zealand). We hypothesized that treatment with GnRH at d 5 should induce ovulation of the first dominant follicle post-AI leading to formation of an accessory CL and consequently increase the P4 level post-AI. In addition, cows were further clustered according to their BCS (low, L= 2.25- 2.75, medium M=2.75-3.00 and high Hi = 3.00- 3.75), group (GnRH and CON) and pregnancy status (pregnant and non-pregnant) into 12 clusters and correlated with the P4 concentration at d 5 and d 14 after AI. Because clusters 2 and 9 covered only 4 cows [2 in each cluster, (BCS- L, CON, PREG- and BCS-L, GNRH, PREG-)], these clusters were excluded from the statistical analysis.

Cows were examined by ultrasound on the day of first PGF2a injection, at d 5 and d 14 post-AI, for the presence of the CL/s (d 5) and for accessory CL (d 14) with a B-mode scanner Mindray DP 50, (Soma Technology Inc. USA), equipped with a 7.5 MHz linear rectal probe. Blood samples were obtained from the coccygeal vein into evacuated tubes (BD Vacutainer® Plymouth, UK) at first PGF2a injection, on d 5 and d 14 as well as at d 21 after AI. The samples were immediately refrigerated and transported in a portable refrigerator to the lab within 3 hours after collection. Tubes were centrifuged (3000 RPM x g for 15 min) and after serum extraction stored at -20°C until P4 analysis. The P4 analysis was done at the Faculty of Veterinary Medicine – Skopje, North Macedonia, using commercially available kits (HUMAN, Progesterone ELISA Test Germany) on an Immuno-scan BDLS reader. The intra- and inter-assay CV were 7.2 % and 8.6%. Pregnancy diagnosis was done at d 21. Day 21 after AI was chosen because, on that day, there is a high probability that the cows might be diagnosed non- pregnant (no CL and P4<0.5 ng/ml) (13). At d 21, a positive pregnancy outcome was predicted when one or more CL larger than 25 mm in diameter were observed on either ovary. The cows that had been diagnosed pregnant at d 21, their pregnancy was confirmed at d 30 after AI by ultrasonographically detecting an embryo with a visible heartbeat.

Average daily temperature and relative humidity values were obtained from a meteorological station located near the herd. The temperature- humidity index (THI) was calculated according to the following formula: THI = (1.8xT+32)–[(0.55- 0.0055xRH) x (1.8xT-26)], where, T=Temperature and RH=Relative Humidity (14).

Multifactorial ANOVA was performed to analyse significant differences in measured parameters (blood progesterone concentration) in respect to the considered factors (GnRH treatment, body condition score, pregnancy status, as well as presence of 2 CL). When null-hypothesis was rejected, Duncan multiple range test was used to identify significantly different comparisons. Measurements for P4 levels at 14th day were log10 transformed due to a high level of variation.

The average THI during the experiment was 79.5±0.6, showing that cows were under heat stress condition. Overall, at d 5, no differences were noticed in the number of CL present on the ovaries between both groups of cows. Similarly, the circulating P4 concentration at d 5 did not differ between the GnRH and the CON group (1.67±0.59 ng/ml and 1.54± 0.52 ng/ml, p>0.05), respectively. Treatment with GnRH at d 5 after AI, significantly increased the percentage of cows with 2xCL at d 14, with more cows having 2xCL in the GnRH group compared to the CON group (82% vs. 0%), respectively. Cows that ovulated after GnRH (2 CL at d 14) had significantly higher P4 concentrations at d 14 (5.87±2.04 ng/mL) in comparison to the CON cows (4.21±1.22 ng/mL) and the GnRH cows that did not ovulate (only 1 CL at d 14 - 3.21±1.12 ng/ mL). At d 21 (Fig. 1), a higher percentage of cows in the GnRH group was diagnosed pregnant compared to the CON group (65% vs. 48.3%, p<0.05). At d 30 (Fig. 2), however, the percentage of pregnant cows was reduced to 61% in the GnRH group and 37.7% in the CON group, but the difference in number of pregnant animals between the two groups still being significantly in favour of the GnRH treated cows. It was assumed that cows that were diagnosed pregnant at d 21 but non-pregnant at d 30, had experienced late embryonic mortality. 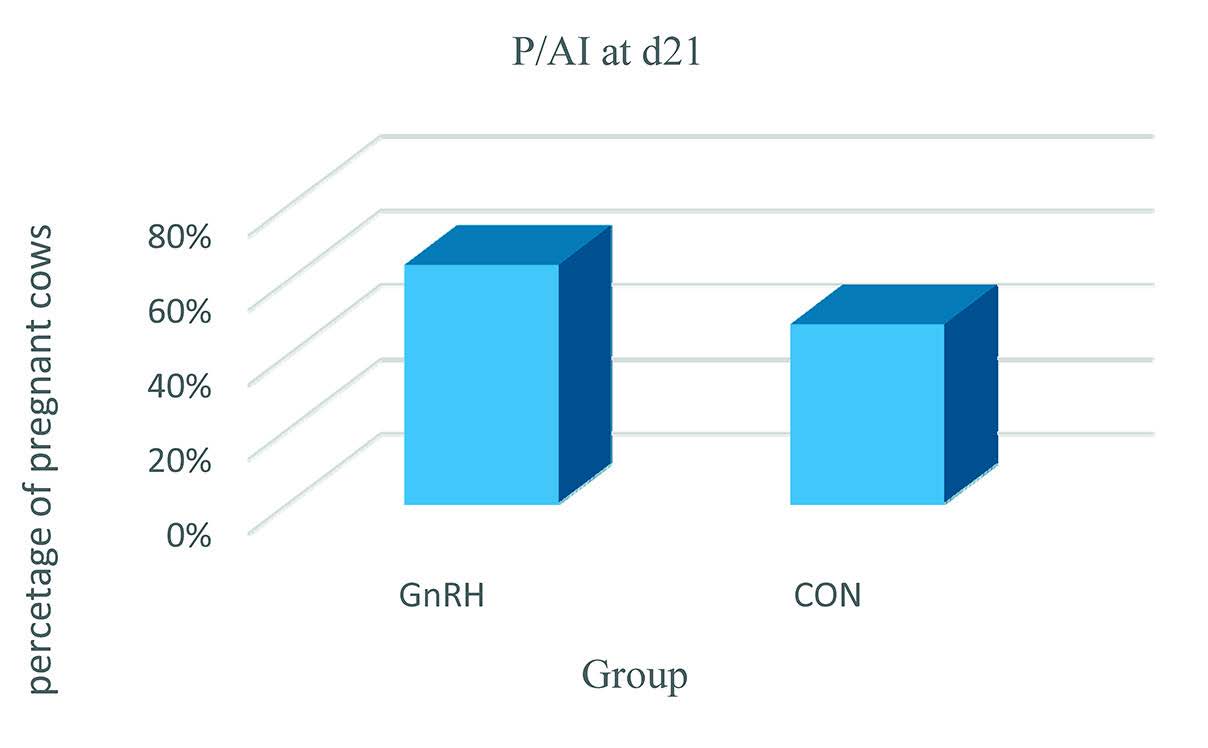 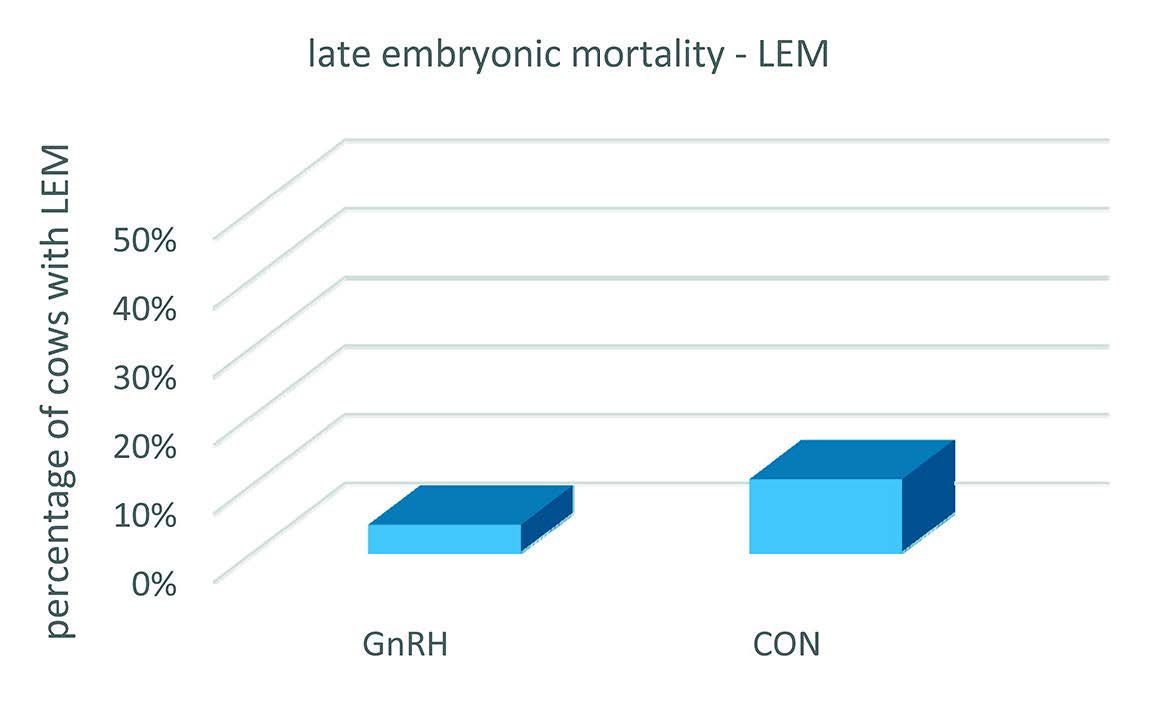 Reaching a high fertility rate during the hot months of the year still represents a challenge for both veterinarians and farmers. Many attempts have been made to overcome this problem; however, the results are unequivocal. Injecting GnRH at d 5 after AI causes an increase in P4 level post AI through formation of an accessory corpus luteum. The latter increases post AI P4 level that might influence the conception rate and might increase P/AI and reduce the number of pregnancy losses. Therefore, in order to overcome lower P/AI during heat stress condition, we are suggesting treating the cows with GnRH at d 5 after AI.

The authors are grateful to the staff of the dairy farm “ZK Pelagonija” for their cooperation in the preparation of this article.

© 2020 Stojanov B. This is an open-access article published under the terms of the Creative Commons Attribution License which permits unrestricted use, distribution, and reproduction in any medium, provided the original author and source are credited.