In recent years many researchers have described the reduced mycotoxin toxicity caused by probiotic bacteria. Since reduction under gastrointestinal conditions of the bioavailability of mycotoxins by probiotics is not fully investigated in birds, the aim of the study was to determine the effect of probiotic on T-2 mycotoxicosis induced apoptosis in broiler’s liver. For the study, twelve 1-days old broilers were divided equally into T-2 toxin (T2) and probiotic with T-2 (P+T2) groups. From the first experimental day, probiotic Enterococcus faecium DSM 7134 was administered in drinking water to P+T2 group. From the fourth day, T-2 toxin was given for three consecutive days to T2 toxin group. At 8th experimental day chicken were sacrificed, liver was fixed in buffered 10% formalin, embedded into paraffin, slices 5 μm in thickness were cut followed by immunohistochemical staining with polyclonal primary antibodies p21 and p53 (Abcam, UK) according to the manufacturers’ guidelines (IHC kit, Abcam, UK). Blood samples were taken by cardiac puncture to measure liver enzymes. Immunohistochemical staining revealed strong expression of p53 and p21 antibodies in hepatocytes nuclei as well as around blood vessels in T-2 toxin group’s chicken liver tissue. Staining by both antibodies was less intensive in P+T2 group. Enzyme analysis showed significantly increased (p<0.05) blood aspartate transaminase and alanine transaminase concentrations by 33.87% and 68.03% respectfully in T2 toxin group, while enzyme concentrations were decreased in P+T2 group. The obtained results showed reduced features of liver apoptosis in treatment with probiotic bacteria.

Both humans and animals are continuously exposed to variable levels of mycotoxins - toxic secondary metabolites produced by organisms of the fungus kingdom (aflatoxins, ochratoxin A, fusarium toxins and others) (1). The long-term exposure of mycotoxins, which occurs naturally in the diet, might cause tissue and genetic damages (2). Their presence in high concentrations in poultry feed may induce genotoxic, cytotoxic, cancerogenic and teratogenic effects (3).
The most toxic trichothecene is a type A trichothecene T-2 mycotoxin, produced naturally by Fusarium fungi found in grains such as barley, wheat and oats (4). T-2 toxin is known to induce apoptosis, a process of programmed cell death that occurs in the mammalian cells (5). As the toxicological effects of mycotoxins are severe causing lethal and sublethal effects, many scientists are investigating the mycotoxins degradation strategies (6, 7, 8). In recent studies, the removal of mycotoxins from contaminated PBS by probiotic bacteria has been noticed (9). However, in the presence of mostly a lf a to x in s , only limited experiments in vivo indicate possible reduction in the uptake of bacterial complex by the gastrointestinal tract (10, 11).
Although liver plays a key role in breaking down or modifying toxic substances, so far only few studies have been carried out on mycotoxins detoxication by probiotics in birds gastrointestinal system (7). Therefore, the aim of the study was to determine the effect of probiotic Enterococcus faecium DSM 7134 (probiotic) on T-2 mycotoxicosis induced apoptosis in broiler’s liver. The apoptotic cells were detected by apoptosis regulator proteins, antibodies p21 and p53. As the ratio between enzymes aspartate transaminase (AST) and alanine transaminase (ALT) (AST/ALT ratio) in the blood of human or animal is measured to differentiate between causes of liver damage, or hepatotoxicity (12), the liver-enzymes AST and ALT were measured to evaluate the serum transaminase activity during T-2 mycotoxicosis. Additionaly, the toxic effect of T-2 mycotoxin was evaluated by the comparison of liver weights between P+T2 and T2 groups as organ weight changes have long been accepted to be a sensitive indicator of chemically induced changes to organs in toxicological experiments (13).

Animals
Twelve 1-day old ROSS broilers (Gallus gallus domesticus) were divided into two groups: T-2 toxin group (T2) - 6 birds; and probiotic with T-2 toxin group (P+T2) - 6 birds. Both groups (T2 and P+T2) were given Fusarium toxin trichothecene T-2 (Sigma, Germany) in a single dose (0.250 mg/bird/day) with daily oral gavages for three consecutive days, starting from the fourth day after hatching. When applying T-2 mycotoxin, the LD50 was taken into consideration, which is 4.97 mg/kg body weight. From the very beginning until the end of the experiment for the P+T2 group’s chicken the probiotic, Enterococcus faecium DSM 7134 in concentration of 3.3x109 cfu was administered in drinking water in quantity of 0.2 g/l. Throughout the experiment, feed and water ad libitum were given to all chickens.
The experimental protocol was approved by the Ethical Committee of the Ss. Cyril and Methodius University in conformity with the recommendation provided in the European Parliament and of the Council on the protection of animals used for scientific purposes (Directive 2010/63/EU).

Immunohistochemistry
24 hours after the last application of T-2 toxin, the chickens were sacrificed by total ether anesthesia and organ and blood were collected. Before the sacrifice, the broiler’s body weight was measured and for the immunohistochemical analyses the absolute and relative liver weight were determined. The liver was fixed in buffered 10% formalin, embedded into paraffin and 5 μm thick slices were cut (microtome Leica 2135). Thereafter the slices were deparaffinized with xylene and rehydrated in a graded series of ethanol. Endogenous peroxidase activity was blocked with 3% H2O2 followed by immunohistochemical staining with polyclonal primary antibodies p21 and p53 (Abcam, UK) according to the manufacturer’s guidelines (IHC kit, Abcam, UK). Biotinylated secondary antibody and streptavidin-conjugated peroxidase were used for detection using DAB as chromogen. Nuclei were counterstained with Harris Hematoxylin. Negative controls contained antibody diluent (Dako, S0809) instead of primary antibodies. Broiler’s liver sections for identifying p21 and p53 were used as positive controls (14). Photos of the slides were taken by the microscope Zeiss Axioplan-2 Imaging (Germany) and microscopic camera (AxioCam HRc, Germany). 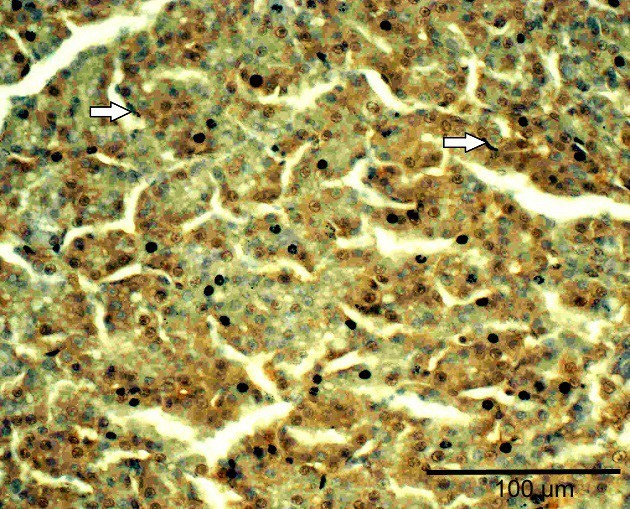 The strong expression of p53 revealed around lobular and interlobular blood vessels as well as in hepatocytes, Kupffer cells and endotheliocytes in the T2 toxin group’s chicken liver tissue (Fig. 2). 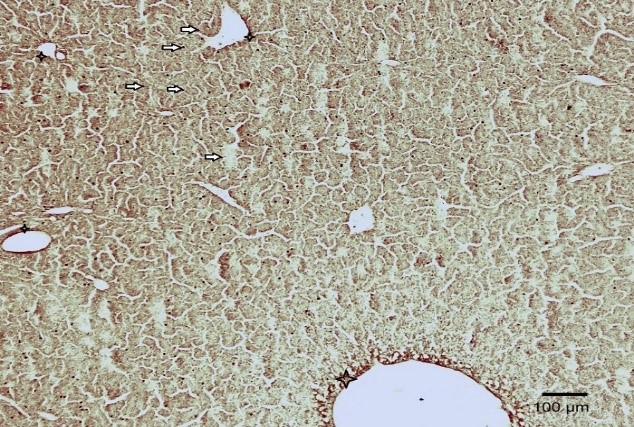 The staining of hepatocytes by both antibodies was less intensive in P+T2 group (Fig. 3 and 4). No large tissue destructions were noticed in the liver of the P+T2 group chicken. 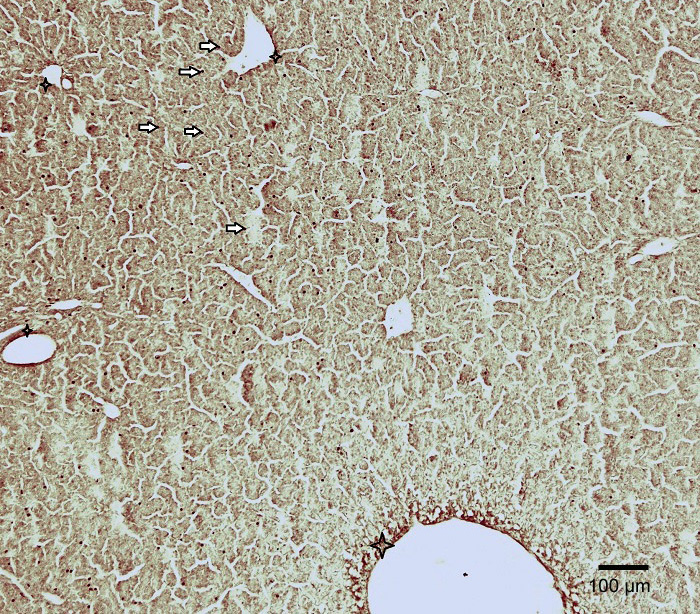 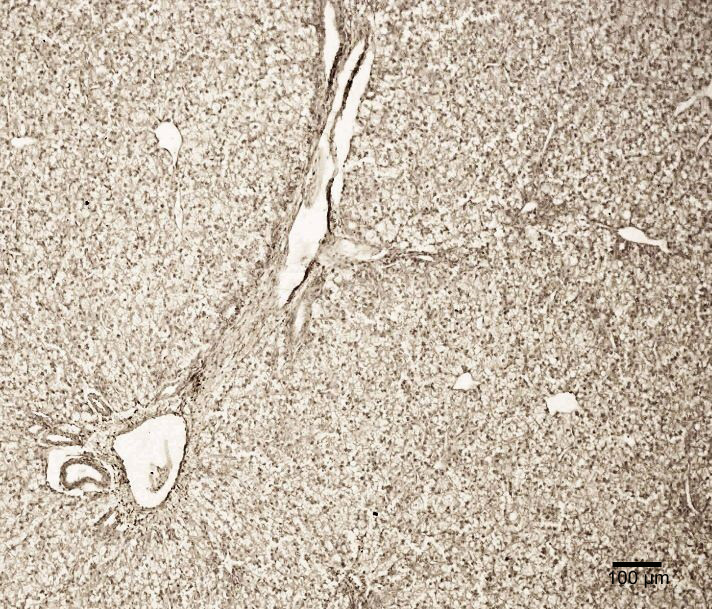 Biochemical analyses
The activity of liver enzymes after three days of T2 toxin application are shown in Table 2. In P+T2 group, both- the AST and ALT values-are decreased by 20.75 % and 8.29 % respectively, compared to T2 group (p<0.05).

T-2 toxin belongs to a group of Fusarium mycotoxins (15), that is widely encountered as natural contaminant known to elicit toxin responses in different organs and tissues particularly in the liver. As liver is known to act as the main target organ of T-2 toxin’s toxicity in vivo our current study was carried out on broiler’s liver.
The high expression of the apoptotic regulator proteins, antibodies p21 and p53, during T-2 mycotoxicosis noted in T-2 toxin group are in accordance to our previous studies (7, 14), as T-2 toxin is shown to be as a trigger of apoptosis (16). Antibody p53 acts as a tumor suppressor in many tumor types; induces growth arrest or apoptosis while antibody p21 may be the important intermediate by which p53/TP53 mediates its role as an inhibitor of cellular proliferation in response to DNA damage (17, 18).
Probiotics are defined as microorganisms that are believed to provide health benefits for humans and animals when consumed (19, 20). Although there are numerous claimed benefits of using commercial probiotics, they are still not backed by sufficient scientific evidence. Our study reveals fewer tissue destructions and apoptotic cells in P+T2 group compared to the T2 group broilers supporting the opinion about the effective role of probiotics on the prevention or partial remediation of the damages induced by mycotoxins (2, 8).
The low body, absolute and relative liver weight registered in our studies in T2 toxin group compared to the increased weight values in P+T2 toxin groups is probably a result of a growth depressed activity similarily as found after T-2 toxicosis and aflatoxicosis by several researchers (21, 22).
The liver enzyme ALT is similar to AST as both enzymes are associated with liver parenchymal cells. The difference is that ALT is found predominantly in the liver, while AST is found in the liver, heart (cardiac muscle), skeletal muscle and other tissues as well. Our findings for increased enzyme concentrations of AST and AST in T2 group go along with pathohistological findings of liver tissue, because increased values of those enzymes show toward hepatic degeneration (22).

Since the results of our study show the reduced features of liver apoptosis in treatment with the probiotic bacteria the microbial detoxification of mycotoxins may become a promising choice being a specific, effective, irreversible and environmentally friendly strategy of detoxification that leaves no toxic residues. Therefore, more studies focusing on probiotic bacteria, which can be directly applied in the foodstuff and food, are required in the future.

The authors would like to thank Mrs. M. Tamm for her kind laboratory assistance.

© 2020 Hussar P. This is an open-access article published under the terms of the Creative Commons Attribution License which permits unrestricted use, distribution, and reproduction in any medium, provided the original author and source are credited.