Chicken astroviruses (CAstV) are enteric viruses of poultry causing gastroenteritis, malabsorption, gout and white chick disease commonly known as runting-stunting syndrome (RSS). It can affect the wide range of poultry birds, especially chicken, turkey and duck worldwide. To our best knowledge there is no published report on presence of antibodies against CAstV in Bangladesh. Therefore, the study aimed to detect the presence of CAstV antibodies in broilers and sonali chickens (a cross-bread) in Bangladesh through a cross-sectional survey. A total of 454 blood samples from 66 flocks of broiler (n=343) and sonali chickens (n=111) of different ages were obtained during 2017 from four districts. The birds were healthy but were not vaccinated against CAstV. The samples were tested for specific antibodies against CAstV Group B by using commercially available ELISA kit. Overall, 16.74% (76/454) samples and 34.84% (23/66) flocks were positive for CAstV antibodies. The seroprevalence of CAstV was significantly (p=0.001) higher in sonali chickens (36.96%) than broiler (10.20%), while it was significantly higher (p=0.001) in birds of Bogura district (36.94%) than the other three districts. Regarding the age groups, seroprevalence was insignificantly (p=0.192) higher in sonali chicken before laying age (45%) than during laying age (27.45%). Regarding the seasons, CAstV infection was prevalent significantly (p=0.001) higher in winter season. Thus, the present study indicated the presence of CAstV in poultry in Bangladesh, so further studies are required to find out the magnitude of the problem in the country.

The astroviruses belonged to the family Astroviridae, divided into two genera, Mamastrovirus commonly known as mammalian astroviruses and Avastrovirus commonly known as avian astroviruses (1). Morphologically astroviruses are 28-30 nm in diameter, small, rounded, non-enveloped, positive-sense ssRNA viruses with 7.5 kb in length of RNA but genome size varies within the family from 6.2 (human) to 7.7 kb (duck) (2, 3). The virus has star-like surface projections, thus Madeley and Cosgrove named these viruses as astroviruses, after the Greek word ‘astron’ meaning star (4). Historically, the name of the astroviruses have been given according to the species they infect, like turkey astrovirus (TAstV) (5). The astrovirus was first identified in stools of children with gastroenteritis (4). The chicken astrovirus (CAstV) is associated with malabsorption in broiler chickens and is related with runting stunting syndrome (RSS) as it causes enteritis and growth retardation (6, 7). The RSS is a disease that is characterized by poor growth in broilers, with lower feed efficiency rate, immature feathering, smaller comb and beak. It has been reported because of the white chicken syndromes (WCS) and gout caused by CAstV (8, 9). The virus mostly infects broilers at age between 6 to 12 days (10). In the past, the astrovirus was known to cause enteritis in humans but it is now recovered from various animal species such as chickens, turkeys, dog, cats, cattle, swine, mice, etc. (11).
Poultry farming in Bangladesh started in 1980’s as commercial farming and it has now become an established industry and is playing an important role in animal protein source along with the contribution in national gross domestic production (12). The poultry industry is also facing many challenges in Bangladesh and the biggest challenge is the viral disease. There are many known diseases but there are still expected to have some other diseases which are not known to poultry industry yet. The prevalence of CAstV in poultry species has been reported from all over the world including UK, Netherlands, Spain, Australia and USA (13). To the best of our knowledge there is no published report on seroprevalence of CAstV in Bangladesh although our poultry veterinarians are complaining about RSS. Thus, the objective of the present study was to carried out a cross-sectional survey by using Enzyme-linked immunosorbent assay (ELISA) to target antibodies against CAstV in chicken in Bangladesh.

Study area and population
The cross-sectional survey on CAstV was carried out in broilers and sonali (cross-breed between Rhode Island Red cocks and Fayoumi hens) type chickens from four districts of Bangladesh during January to December 2017. A total of 66 flocks including 42 broilers (n=343) and 24 sonali chickens (n=111) with no history of vaccination against CAstV and no clinical abnormalities were included in the study. Average 8 chickens from each broiler and 4 to 5 chickens from each sonali flocks were selected randomly whereas average flock size was 750 of broiler and 730 of sonali. The age of chickens was between 5-40 weeks for sonali chicken and between 5-20 days for broilers. The sampling was done during three prevailing seasons in Bangladesh, i.e., during summer (1st of March to 31st of May), rainy (1st of June to 31st of October) and winter (1st of November to 28th of February).
For each sampling, 22 flocks per season were randomly selected from Bogura (n=24), Jamalpur (n=8), Mymensingh (n=19) and Gazipur (n=15) district.

Sample collection and preparation
A total of 454 chickens were selected for blood samples collection. A volume of 1ml blood sample per chicken was drawn from wing vein using 3ml disposable syringe without anticoagulant. The Animal Ethics Committee of Bangladesh Livestock Research Institute approved the protocol of bird handling and sampling. The blood samples were kept for one hour at room temperature at 45° angle for clotting of the blood. After that, the samples were sent to laboratory in ice cool carrier and kept for two hours at 4 °C in a refrigerator. The serum was separated by centrifugation of the blood at 3000 rpm for 5 minutes and the clear straw- coloured serum was transferred into 2 ml Eppendorf tube and stored at -80 °C until further laboratory analysis.

Antibody detection by indirect ELISA test
The collected sera samples were tested for the presence of specific antibody against CAstV Group B by indirect enzyme linked immunosorbent assay (ELISA) test. The ELISA test was performed by using commercially available CAstV Group B indirect ELISA kit manufactured by Biocheck Ltd. (Lot No. FS7216, 2211 ER Reeuwijk, The Netherlands) and test protocol was followed according to the manufacturer’s instructions. The cut-off value was 0.5 and samples were identified positive when sample/positive (S/P) ratios became greater than the cut-off value (titer≥0.501).

Statistical analysis
The prevalence was recorded as the percentages. The association of CAstV positivity and independent variables like the type of chicken, the farm’s location, the season of sampling and the age of chickens were determined statistically by Chi-square test using STATA (version 14) software. The p<0.05 was considered significant. The 95% confidence interval (95% CI) for each variable was also calculated. 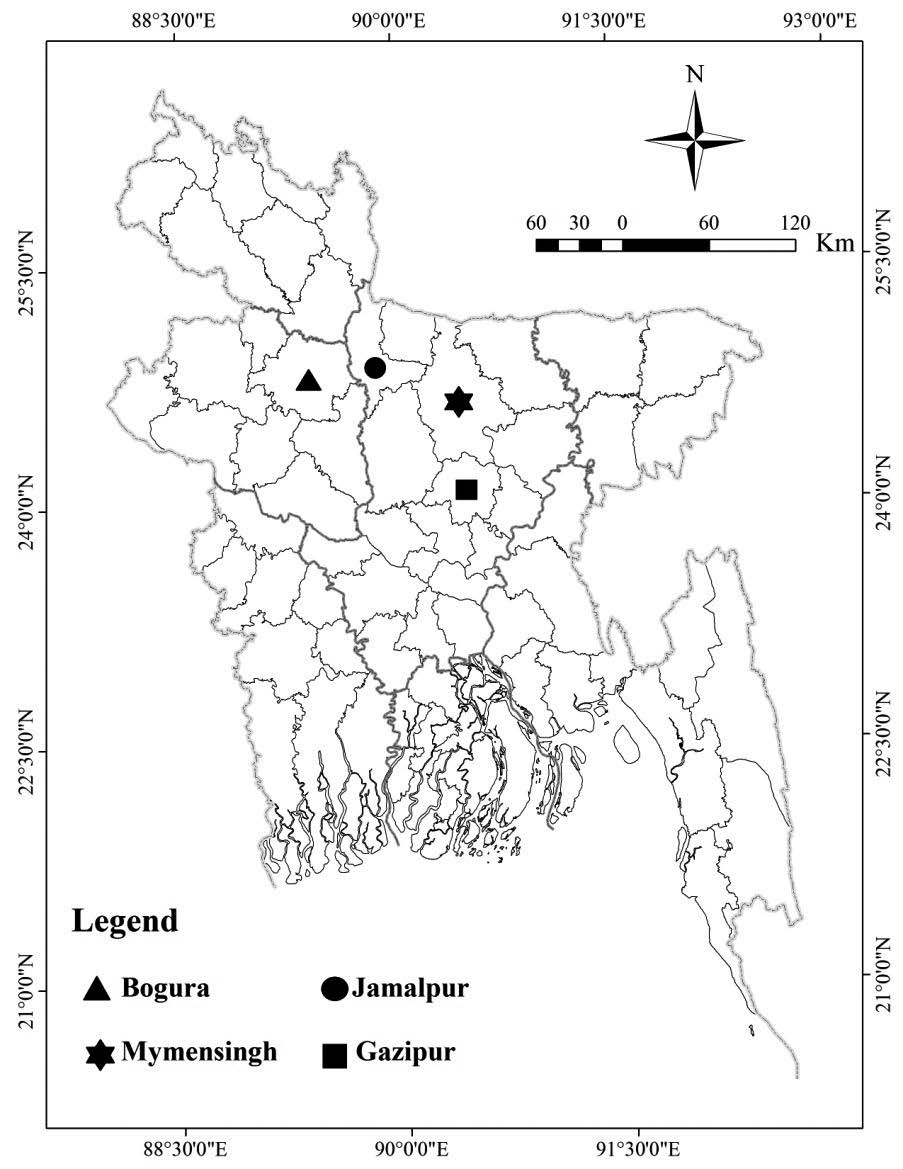 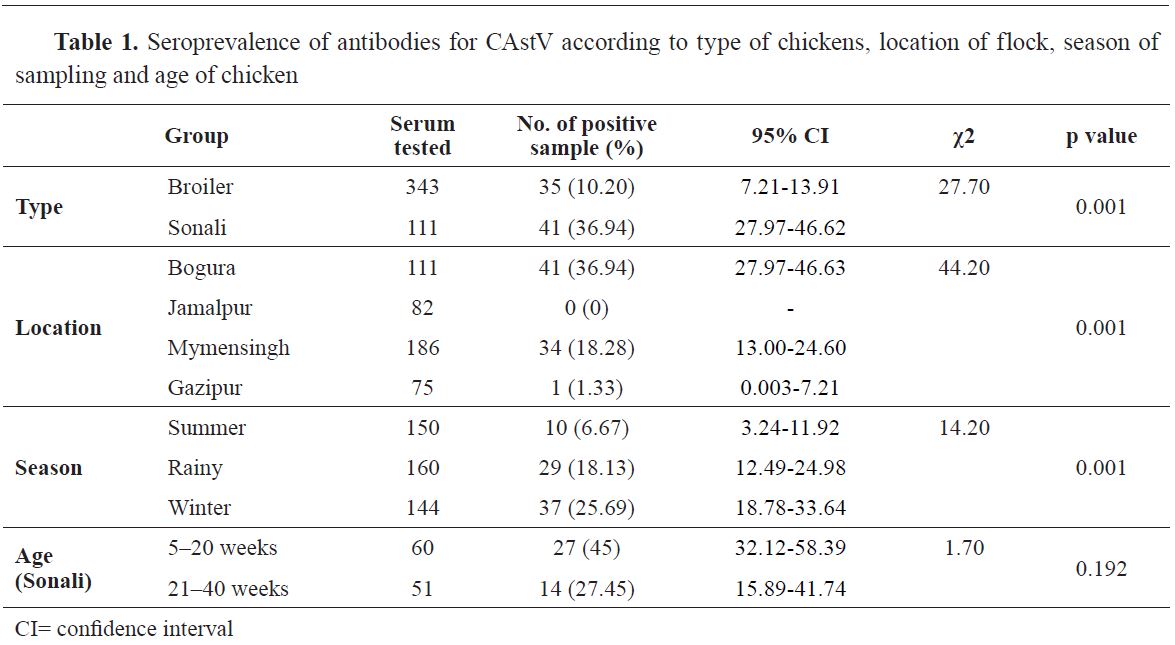 The runting stunting syndrome (RSS) syndrome and white chick’s conditions has been observed recently in poultry in Bangladesh by field veterinarians based on sign and symptoms and gross lesions, but there is no sero-surveillance report yet on CAstV. The presence of CAstV antibodies in chicken has been demonstrated by several researchers worldwide like India (14, 15), Brazil (16), Canada (17), West Indies (18, 19), China (20). Baxendale and Mebatsion (13) and Todd et al. (21) also described CAstV seroprevalence in UK, USA, Australia, and Europe.
In present study, we found an overall prevalence of 16.74% based on antibodies against CAstV. The seroprevalence of CAstV is varied in different countries. Baksi et al. (14) demonstrated a higher (68.03%) seroprevalence of CAstV in broiler breeders in India. In UK, it was reported 53% in parent flock, 28% in grandparent, and 21% in great grandparent stocks (21). In Nigeria, a very low seropositivity of 4.0% and 8% against CAstV 612 and CAstV 11672, respectively has been reported (21). While in China, 60.68% seroprevalence has been reported with a prevalence of 70.17%, 89.00%, 31.67%, 59.05%, and 45.79% in layers, layer parent, broilers, broiler parent, and domestic chicken flocks, respectively (20). However, a prevalence of 10.20% in broiler chicken was observed in present study which is quite lower than that in China in same breed (31.67%). Smyth et al. (22) reported that 96% of the gut contents of broiler flocks were positive for CAstV in the UK. Sonali birds are highly popular cross-bred chicken strains in Bangladesh due to the reason that consumers accept it as indigenous chicken (22). In many surveys, it was reported that sonali type layer chickens are more vulnerable to infectious diseases and carrying endemic diseases and act as a risk factor for other chicken types due to its farming practice under poor biosecurity and farmers are reluctant to vaccination against endemic diseases (8, 10). We found that comparatively higher number of sonali layer chicken showed CAstV antibody positivity in wide range of age groups than broiler chicken. Poor farm biosecurity and higher flock density could play a significant role of higher prevalence of CAstV in sonali chickens.
Season plays an important role in transmission of disease and disease epidemiology. The seasons in Bangladesh are prominently divided into three with different weather characteristics. Our study reported that winter has the highest prevalent for CAstV (25.69%) than summer and this statement complied with the findings of Smyth (10), who observed greater prevalence of CAstV when temperature become lower in winter season in UK.
Astroviruses are more resistant to environment and resist on routinely used disinfectants (5, 11). It is also resistant to temperature up to 60 °C and low pH. According to Schultz-Cherry et al. (11) 1.5% Virkon S, 0.3% formaldehyde, 0.1% b-propiolactone, and 90% methanol are the only disinfectants to kill the CAstV. It is very hard to rid the flocks completely after getting outbreak. So, it is suggested that proper sanitary measures and disinfectants to kill the CAstV. It is very hard to rid the flocks completely after getting outbreak. So, it is suggested that proper sanitary measures and disinfection should take before start a flock along with maintain proper farm biosecurity measures could protect birds from CAstV.

The results are evident that both sonali and broiler chicken flocks are carrying CAstV antibody in Bangladesh. Since there is no vaccine of CAstV available in Bangladesh right now, therefore, all types of chickens are non-vaccinated against CAstV. Accordingly, the present findings indicate that the birds were naturally exposed to CAstV, that’s why the antibody was developed in the respective chickens. Moreover, the chickens that were included in this study were healthy and there was no RSS, white chick condition, growth retardation or enteritis, this warrant further suggests that the virus is circulating in the country and therefore, further studies are required to frame out the control policies. In addition to virus isolation and molecular characterization of CAstV circulating in the country is also required.

© 2020 Ali M. Z. This is an open-access article published under the terms of the Creative Commons Attribution License which permits unrestricted use, distribution, and reproduction in any medium, provided the original author and source are credited.