Kaposiform hemangioendothelioma (KHE) is a rare, locally aggressive, low-grade, malignant vascular neoplasm of the skin, deep soft tissue, and bone in human (1, 2). It is typically seen in childhood, with 45% of cases present within the first year of life, often occur at birth (3). This neoplasm shows significant resemblance to Kaposi’s sarcoma (1). Multiple cutaneous KHE is extremely rare and was present during the birth of a human only in three cases (4, 5). In addition, few cases of Kaposi’s sarcoma in middle-aged female dogs, KHE was found in a six-year-old Fischer’s lovebird (Agapornis fischeri) on the neck, and in a 10- year-old dog on its limb (6, 7, 8). We present here a new-born calf having cutaneous KHE and to the best of our knowledge, it is the first case of KHE in a new-born calf.

Gross examination of calf showed subcutaneous nodular masses spread over the whole body (Fig. 1A). Metastatic lesions were not found in peripheric and intrathoracic, as well as intra-abdominal lymph nodes and visceral organs (i.e. spleen, liver, lungs, and brain). The masses were firm in touch, greyish-white in colour, 0.5-2 cm in diameter range (Fig. 1B). Some of these masses showed petechial or severe haemorrhages. The cut surfaces of the masses were homogeneous, greyish-white, reddish-white or dark red in colour according to whether there were haemorrhages (Fig. 1C and D).
At microscopical examination, tumour was showed diffuse distribution in the dermis and subcutis. The tumoral area were composed of sheets of spindled and round epithelioid endothelial cells intermixed with slit-like vascular lumens and extravasated red blood cells (Fig. 2A). The atypia of the spindle and round epithelioid endothelial cells was minimal and mitoses were not frequent (2 mitotic figures per 10 high-power fields). No metastases were seen in any organ. Immuno-histochemically, the tumour cells and capillaries gave strongly cytoplasmic positive reaction for CD31 (Fig. 2B) but they were negative for vimentin, alpha smooth muscle actin and cytokeratin AE1/AE3. Control sections revealed negative or weak immunostaining confirming the specificity of the primary antibodies. 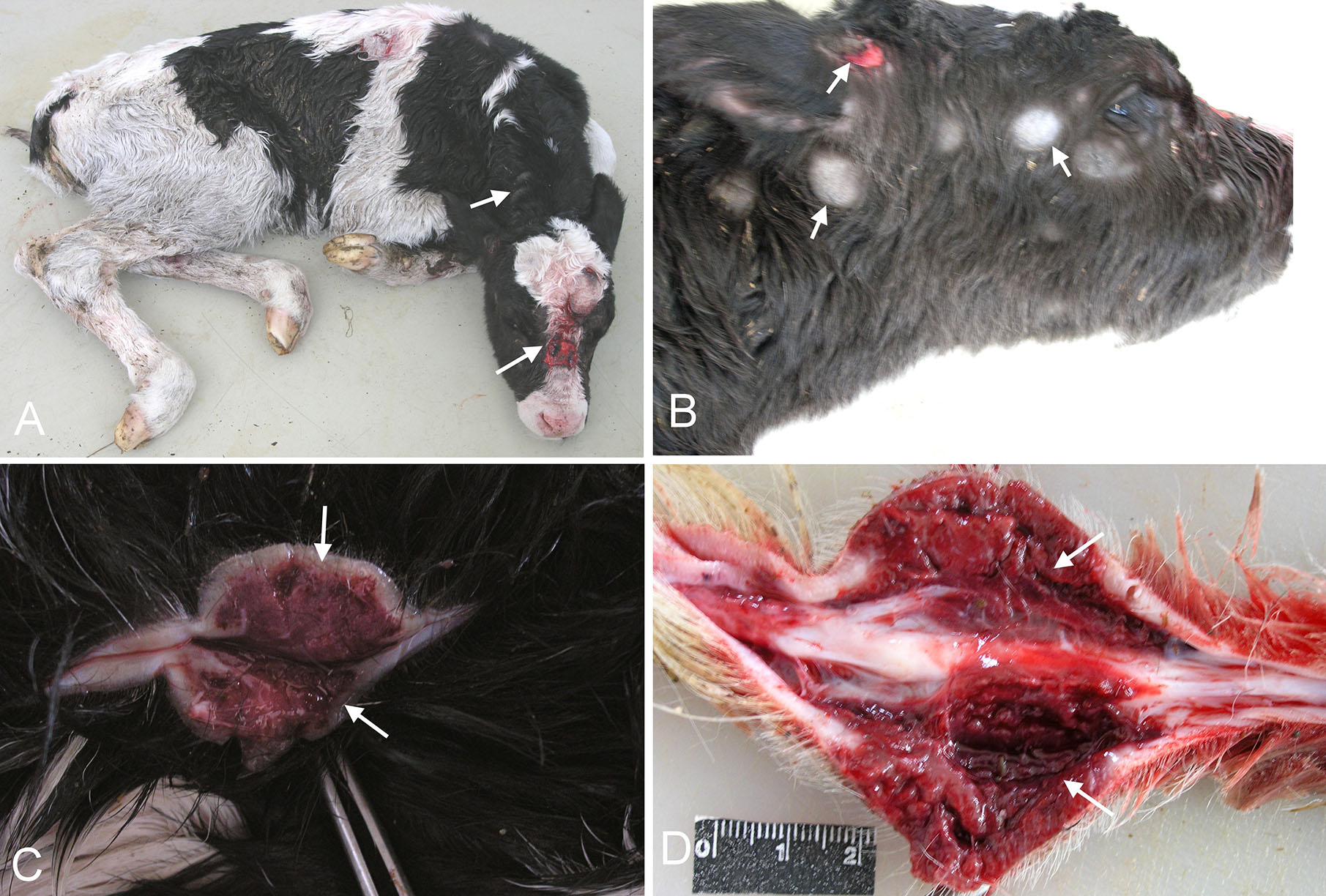 Figure 1. Cutaneous nodular masses spread over the whole body of the calf (arrows) (A). Greyishwhite tumour masses (arrows) (B). Cut surface of the haemorrhagic mass taken from shoulder (arrows) (C and D).

Kaposiform hemangioendothelioma is an extremely rare and distinctive tumour of soft tissue that apparently occurs exclusively in children and oftenseenatbirth(3, 9).Innon-humananimalspecies, it has been previously reported from a Fischer’s lovebird (Agapornis fischeri) and a dog (6, 7). To the author’s knowledge, this is the first report that defines the detailed pathological findings of congenital KHE in a new-born Holstein calf. In accordance with human cases that were reported in children, this case was occurred in a new-born calf. In the previous animal reports of KHE, macroscopically, the mass was located in the neck of the Fischer’s lovebird while the other mass was located in the limb of the dog. In the dog, clustered red papules are seen on posterior limb. A sub- cutaneous mass with blood content on the neck is observed in the Fischer’s lovebird (6, 7). However, in the present case, it has been seen that several firm nodular masses are spread over the whole body.
Microscopically, the tumour has area varieties from resembling a capillary hemangioma to solid areas. The solid areas show varieties from rounded nests of epithelioid endothelial cells to solid sheets of spindled endothelial cells with slit-like vascular lumens (5, 10). In a previous case, it has been reported that dermal nodules are composed of spindle cells forming vascular slits and this histologic appearance is similar to
Kaposi’s sarcoma (6). In this report, in accordance with previous reports, sheets of spindled and round epithelioid endothelial cells intermixed with slit-like vascular lumens were observed. In the previous reports, mitotic activity was seen as scant to occasional and nuclear polymorphism was observed as mild to moderate (6, 7, 10). In this case, the atypia of the tumour cells was minimal and mitoses were not frequent.
In the different reports of KHE, immunohistochemistry is used for diagnosis (5, 6, 7, 11). CD31 is a 130-kd trans membrane glycoprotein and has been previously reported as a reliable and specific immunohistochemical marker of endothelial differentiation in the different studies (12, 13). Previous KHE case reports described positive CD31 expressions in the tumour cells and capillaries (5, 6, 7, 11). In the present report, the tumour cells and capillaries have given strong reaction for CD31. This immunohistochemical finding was also supportive of KHE diagnosis. However, negative reaction was observed for vimentin, alpha smooth muscle actin and cytokeratin AE1/AE3 in the tumour cells. Accordingly, in a KHE case report, positive CD31 and CD34 expressions are observed while muscle specific actin is negative in the tumour cells (5). In another KHE case report, positive CD31 and vimentin expressions are noted in the tumour cells (7).

In this case report, a novel accidental case of congenital KHE was presented in a new-born calf. Further research on this category should enhance our understanding of oncogenic mechanisms. To the best of our knowledge, this unusual case is the first report of Kaposiform hemangioendothelioma in a new-born calf.

© 2020 Aydogan A. This is an open-access article published under the terms of the Creative Commons Attribution License which permits unrestricted use, distribution, and reproduction in any medium, provided the original author and source are credited.