It is well known in cattle that reproductive disorders are intimately associated with low or high body condition score (BCS). However, little is known concerning the relationship between BCS and oxidative stress, particularly in the reproductive tract. Thus, the aim of the present study was to investigate the oxidative stress biomarkers according to cows BCS values in the plasma, ovaries, oviductal, follicular and uterine fluids. The study was conducted on 58 cows classified in four classes (1, 2, 3 and 4) of BCS varying from1-1.5, 2-2.5, 3-3.5 and 4-4.5, respectively. The genital tracts and plasma were collected from slaughtered cows and processed within 5h after slaughtering. The number of ovarian follicles was measured using ultrasonography and the oxidative stress was assessed by considering total antioxidant status (TAS), catalase activity (CAT), and thiobarbituric acid-reactive substances (TBARS). The results showed that follicles number was significantly affected by BCS; cows with medium BCS (3) presented higher number of follicles than cows with low or high BCS (<3 or >3). Overall, BCS affects significantly the oxidative stress status at different levels of the reproductive tract. Cows with medium BCS (3) showed the best oxidative status than those with low or high values (BCS <3 or >3). In conclusion, the current results suggest that reproductive disorders observed in cows with low or high BCS values could be mediated through oxidative stress affecting consequently the reproductive tract and finally compromising fertility outputs.

Body condition score (BCS), reflecting the nutritional status in beef and dairy cows, has been extensively considered as a valuable practical tool in herd management. BCS is significantly related to metabolic status, productive and reproductive performances (1). BCS measures, by visual inspection and/or palpation, the amount of metabolic energy stored as subcutaneous fat (2). In dairy cows particularly, BCS has been widely used as a practical method in nutrition management (3) and remains significantly associated with incidence of metabolic disorders (4). The importance of BCS in fertility has also been reported (4).
Insufficient intake of energy has been associated with poor reproduction performance in cows with various health problems (5). In this respect, Stagg et al. (6) reported that lower luteinizing hormone (LH) pulse frequency induces prolonged anestrus period in cows that calved with low BCS (<2.5). Similarly, it is shown that cows could be pregnant only with BCS of 2.75-3 and not losing more than 0.5 of BCS unit between calving and first service (7).
On the other hand, excessive body energy reserves can cause several health problems, (reproductive failure, obese and older heifers at puberty that present difficulties during pregnancy) as well as disorders in the development of the mammary gland. As well, excessive fat reserves in dairy cows have been associated with a greater risk of a lowered milk yield and metabolic disorders (4).
There is considerable evidence to support that oxidative stress contributes to a number of health disorders. Excessive reactive oxygen spices (ROS) might damage macromolecules including lipids, proteins, polysaccharides and DNA, leading to cell injury, and increased susceptibility to a variety of health disorders including immune dysfunction, sepsis, mastitis, acidosis, ketosis, enteritis, pneumonia, and other diseases (8). Nevertheless, in cattle, there is real scarce information regarding the association between the oxidative status and BCS. Therefore, the aim of the present study was to investigate the impact of BCS on oxidative status at different levels of the reproductive tract.

Preparation of plasma and isolation of bovine erythrocytes
Blood samples were collected into heparinized tubes from cows before slaughtering. Blood was centrifuged at 5000g for 10 minutes to separate plasma. Plasma was stored at -20 °C for late use.

Collection of follicular fluid, oviductal fluid, ovaries and uterine fluid
The genital tracts of the studied cows were obtained from slaughterhouse. The tracts were transported to the laboratory in a cooler (4 °C). All samples were collected and processed within 1 hour after slaughtering.
Morphology of the corpus luteum was assessed for each individual cow to estimate the stage of the estrous cycle and the follicles number was determined using an ultrasonography.

Follicular fluid
Follicular fluid was aspirated from each follicle with an insulin syringe, due to the low volume of removed follicular fluid from the different follicles of the two ovaries. Samples were kept on ice until centrifugation for 5 minutes at 5400g to remove blood cells. The clear supernatants were aliquoted and stored at -20 °C until use.

Oviductal fluid
Oviducts were separated from the ovaries and the enveloping connective tissues were removed. Oviductal epithelial cells were recovered in plastic tubes by flushing method; each oviduct was flushed with 1ml of physiological solution (NaCl 0.9%). The cells were lysed in three volumes of distilled water, and then centrifuged at 5000g for 10 minutes; the supernatants were collected and stored at -20 °C until use.

Uterine fluid
The fluid was collected by flushing the uterine cavity with 10 ml of NaCl 0.9%. The fluid was aliquoted and stored at -20 °C.
Ovaries homogenate
The ovaries were homogenized using a blender. The homogenate was lysed in distilled water, and lysate was centrifuged at 5000g for 15 minutes to obtain the supernatant which was used as a whole cell extract.
Measurement of antioxidant activity
Three biochemical markers of oxidative stress were measured including total antioxidant status (TAS), catalase activity (CAT), and the level of lipid peroxidation (TBARS). These biomarkers were measured in the ovaries, oviductal and uterine fluids, follicular fluid and plasma.
Catalase activity
Catalase activity was determined using the method of Aebi (10) by measuring the degradation rate of H2O2. Briefly, 20 µl of tissue sample were incubated with 1250 µl of PBS then 730µl of H2O2 (50 mmol/l) were added. The decrease in absorbance at 240 nm was measured. Catalase activity was expressed in terms of 1moles of H2O2 consumed/min/ml.
Total antioxidant status
The antioxidant status of tissue samples was evaluated according to the method of Re et al. (11). This assay is based on the inhibition of the absorbance of the free radical cation from ABTS (2,2’-azinobis (3-ethylbenzthiazoline-6-sulfonic acid)) by antioxidants.  Briefly, ABTS was dissolved in deionized water to make a 7 mM concentration solution. ABTS was incubated with 2.45 mM potassium persulfate in order to produce the free radical cation (ABTS°+) and the mixture was allowed to stand in the dark at room temperature for 12–16 h before use. For our study, the ABTS°+ solution was diluted to an absorbance of 0.7 (±0.02) at 734 nm. A volume of 10 µl of each tissue sample was added of 2 ml of diluted ABTS°+ solution. The absorbance reading was taken exactly 6 min after initial mixing. All experiments were carried out in triplicate. Radical scavenging activity was expressed as the percentage of inhibition.
Measurement of lipid peroxidation
Thiobarbituric acid reactive substances (TBARS) were determined following the method of Stocks and Dormandy (12). Tissue samples were deproteinised by adding trichloroacetic acid (0.5 ml of 30% TCA) and subsequently incubated at 0 °C for 120 min. The mixture was centrifuged at 2500g for 10 minutes at 4 °C and a portion of the supernatant (1 ml) was mixed with thiobarbituric acid (0.25 ml of 1% TBA dissolved in 0.05 mol/l of NaOH) and EDTA (0.075 ml of 0.1 mol/l EDTA) and heated at 95 °C for 15 min then immediately cooled under tap water. The absorbance of the supernatant was determined at 535 nm against a blank that contained all the reagents minus the biological sample. The concentration of TBARS was expressed in absorbance units.
Statistical analysis
All experiments were carried out in triplicate and the data are given as means ± S.E. Calculation of means, S.E, and statistical analysis were performed using Statview 4.02 software (Abacus Concepts Inc., Berkeley, CA, USA). Values of each parameter were expressed as the mean ± S.E. Variables used for comparison purposes were the BCS classes. Differences between treatments were assessed using a one-way ANOVA, followed by posthoc Fisher’s test. Values were considered significant when P < 0.05. 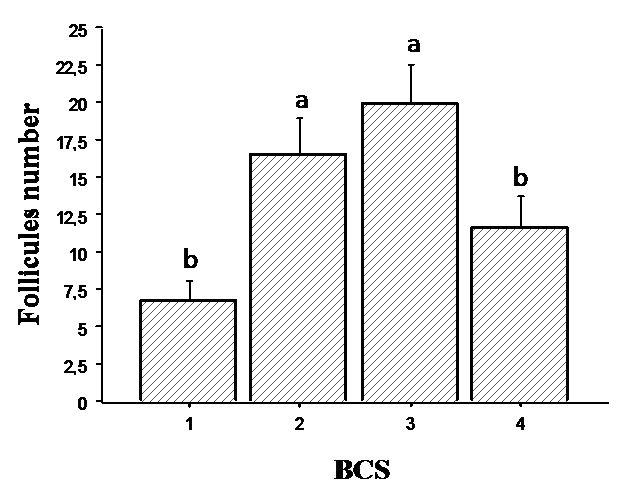 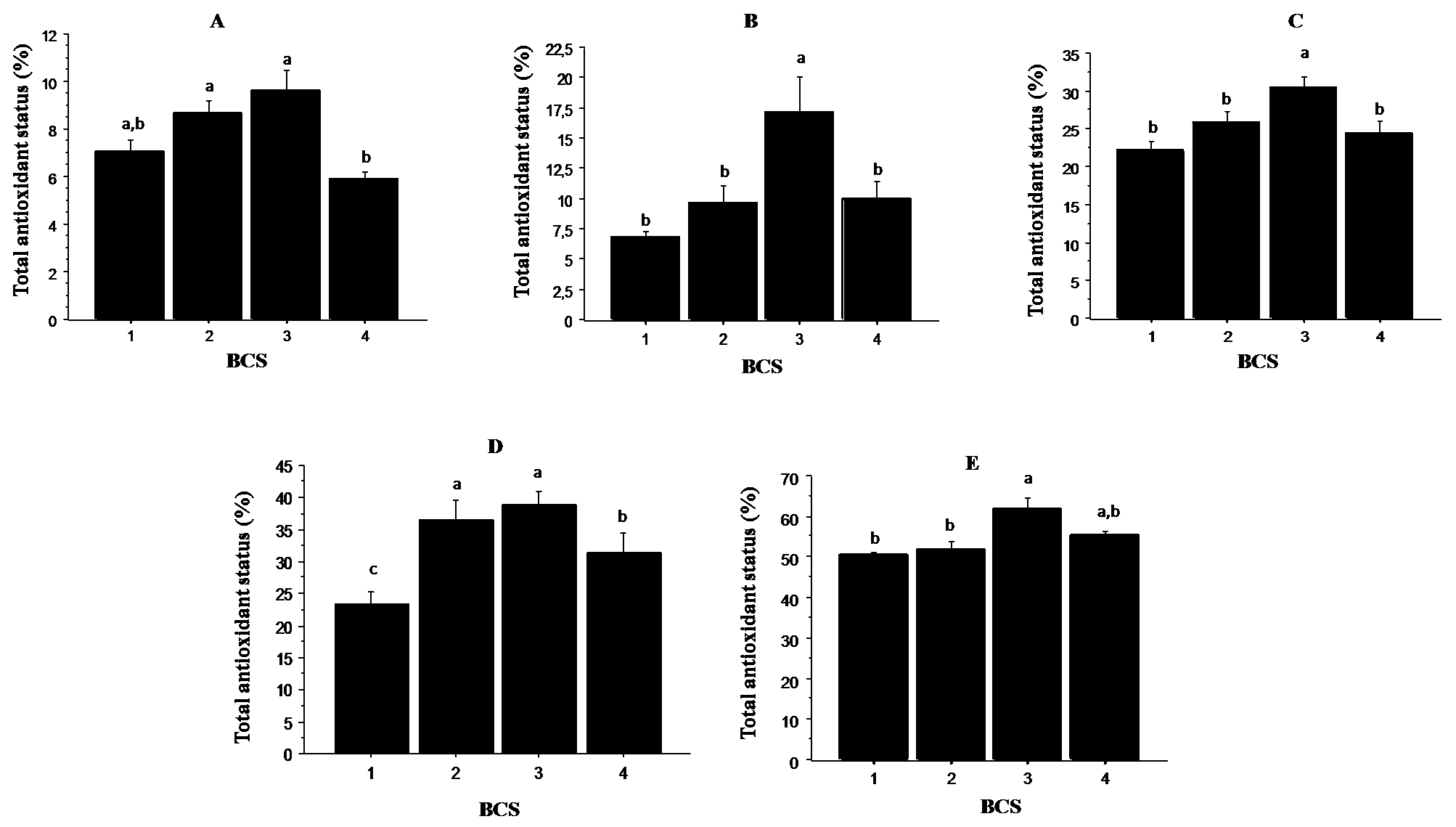 Catalase activity
Catalase is an important enzyme in the antioxidant defense system protecting animals from oxidative stress. It catalyzes the conversion of the hydrogen peroxide (H2O2) into oxygen and water.
Fig. 3. shows the results of catalase activity in oviductal fluid (panel A), uterine fluid (panel B), follicular fluid (panel C), ovaries (panel D) and plasma (panel E) according to BCS. The highest activity was recorded in samples from cows with BCS 3, while cows having BCS 4 presented the lowest catalase activity, particularly in the follicular fluids and ovaries. In the plasma samples, cows with BCS 1 showed the lowest activity. 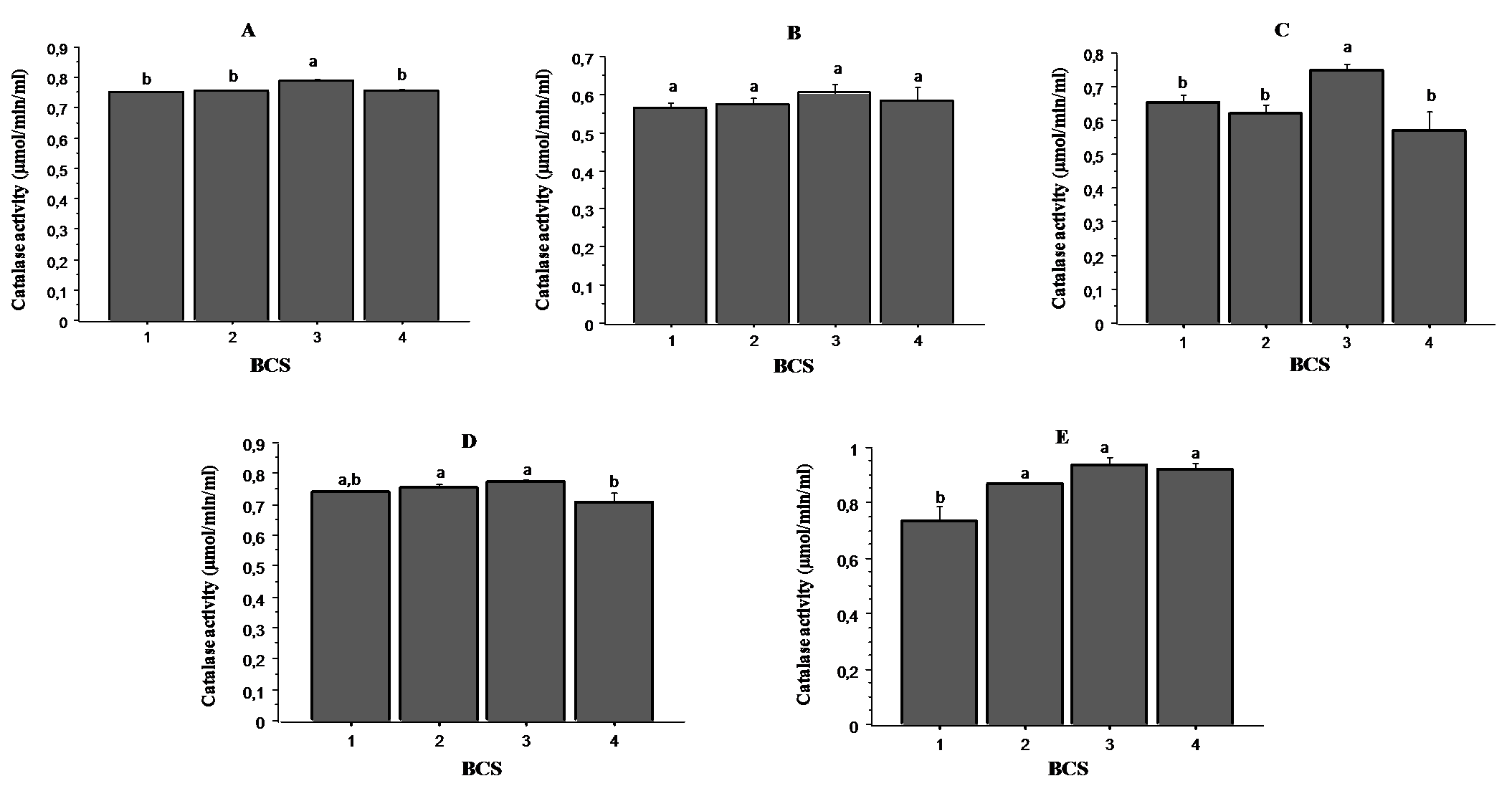 The nutritional status in cattle, reflected by BCS, is an important factor affecting reproductive function and plays a pivotal role in determining fertility. The current study demonstrated that both follicles number and oxidative stress biomarkers are significantly affected by BCS. It was shown particularly that oxidative stress is associated with low or high BCS values including cows with high (>3) and low (<3) values. These findings support that oxidative stress is probably a key factor underlying the different diseases associated with altered nutritional status.

© 2020 Bellik Y. This is an open-access article published under the terms of the Creative Commons Attribution License which permits unrestricted use, distribution, and reproduction in any medium, provided the original author and source are credited.