The worldwide search for the new mutations in the RNA-directed RNA Polymerase domain of SARS-CoV-2
Siarhei A. Dabravolski*,
Yury K. Kavalionak

Severe acute respiratory syndrome coronavirus 2 (SARS‐CoV‐2) is an RNA virus, responsible for the current pandemic outbreak. In total, 200 genomes of the SARS‐CoV‐2 strains from four host organisms have been analyzed. To investigate the presence of the new mutations in the RNA-directed RNA Polymerase (RdRp) of SARS-CoV-2, we analyzed sequences isolated from different hosts, with particular emphasis on human isolates. We performed a search for the new mutations of the RdRp proteins and study how those newly identified mutations could influence RdRp protein stability. Our results revealed 25 mutations in Rhinolophus sinicus, 1 in Mustela lutreola, 6 in Homo sapiens, and none in Mus musculus RdRp proteins of the SARS-CoV-2 isolates. We found that P323L is the most common stabilising radical mutation in human isolates. Also, we described several unique mutations, specific for studied hosts. Therefore, our data suggest that new and emerging variants of the SARS-CoV-2 RdRp have to be considered for the development of effective therapeutic agents and treatments.

The current pandemic outbreak is caused by the novel coronavirus isolate called severe acute respiratory syndrome coronavirus 2 (SARSCoV‐ 2). This virus is a global threat for mankind, the world economy and the ecology, as well. Research suggests that a high mutation rate and the ability for quick adaptation to new conditions allow SARS‐CoV‐2 to cross interspecies barriers and spread from the natural bats’ reservoirs to other hosts (1). The SARS-CoV-2 RdRp (also called nonstructural protein 12 - nsp12) is a key player in the multicomponent viral replication/transcription and proofreading complex. Many modern antiviral drugs are designed to specifically inactivate RdRp or to prevent its interaction with other parts of the replication machinery: co-factors nsp7, nsp8, and nsp14 – exonuclease with proofreading function (2).
In this study, we focused on the identification of mutations in the RdRp domain. In total, we have examined 200 genomes of the SARS-CoV-2 and CoV-like viruses from the “natural” host Rhinolophus sinicus (3), secondary hosts Homo sapiens and Mustela lutreola (4), and artificial host – a model organism Mus musculus (5). We also studied how those mutations would influence the stability of the RdRp domain of nsp12 protein.
Further research of the SARS-CoV-2 RdRp variants could lead to the development of more effective antiviral drugs and vaccines. Also, our data suggest that new and emerging variants of the SARS-CoV-2 RdRp have to be considered for the development of effective therapeutic agents and treatments.

Effect of mutations on the protein stability
The effect of identified mutations on the protein stability, flexibility and motion was studied with MAESTRO on-line tool (10), Dynamut server (11), and DUET (12). MAESTRO predictions are based on artificial neural networks (ANN), support vector machines (SVM) and multiple linear regression (MLR), with ΔΔG values as an output. In addition to the Normal Mode Analysis (NMA) of the structures, Dynamut implements an algorithm to analyze the effect of point mutation(s), with a wide set of parameters, describing the influence of the vibrational entropy changes on the protein dynamics and stability. DUET server uses the advantage of two methods (SDM and mCSM) combined by Support Vector Machines (SVMs).

Identification of mutations
The SARS-CoV-like genome sequences from the natural host Rhinolophus sinicus have been analyzed. In total, we have identified 25 mutations in the RdRp domain (Table 1). Mutations have been found in 16 out of 18 analyzed sequences. 6 RdRp domains have had a single mutation, 5 – double mutations, 2 – triple, and 3 – multiple mutations. In general, mutations were located throughout the entire domain. There were only two rather unique mutations, T118 and D125. Those two mutations have appeared in several genomes and were shown to mutate in several amino acids: T118 to N and A; D125 to G, E and N. 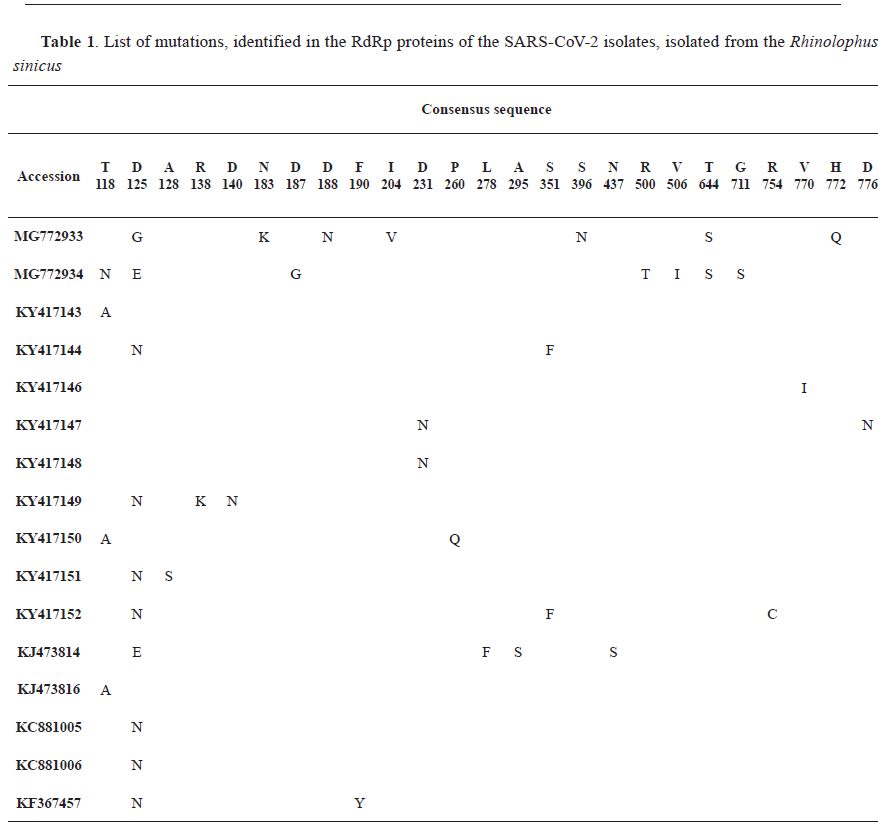 Forty-two genomes of the mice (Mus musculus) - isolated SARS-CoV-like sequences have been analyzed. Surprisingly, we found no mutations in the RdRp domain (data not shown).
Thirteen genomes of the mink (Mustela lutreola) - isolated SARS-CoV-2 sequences have been analyzed. In 7 RdRp domains, we found only one mutation – P323L (Table 2). 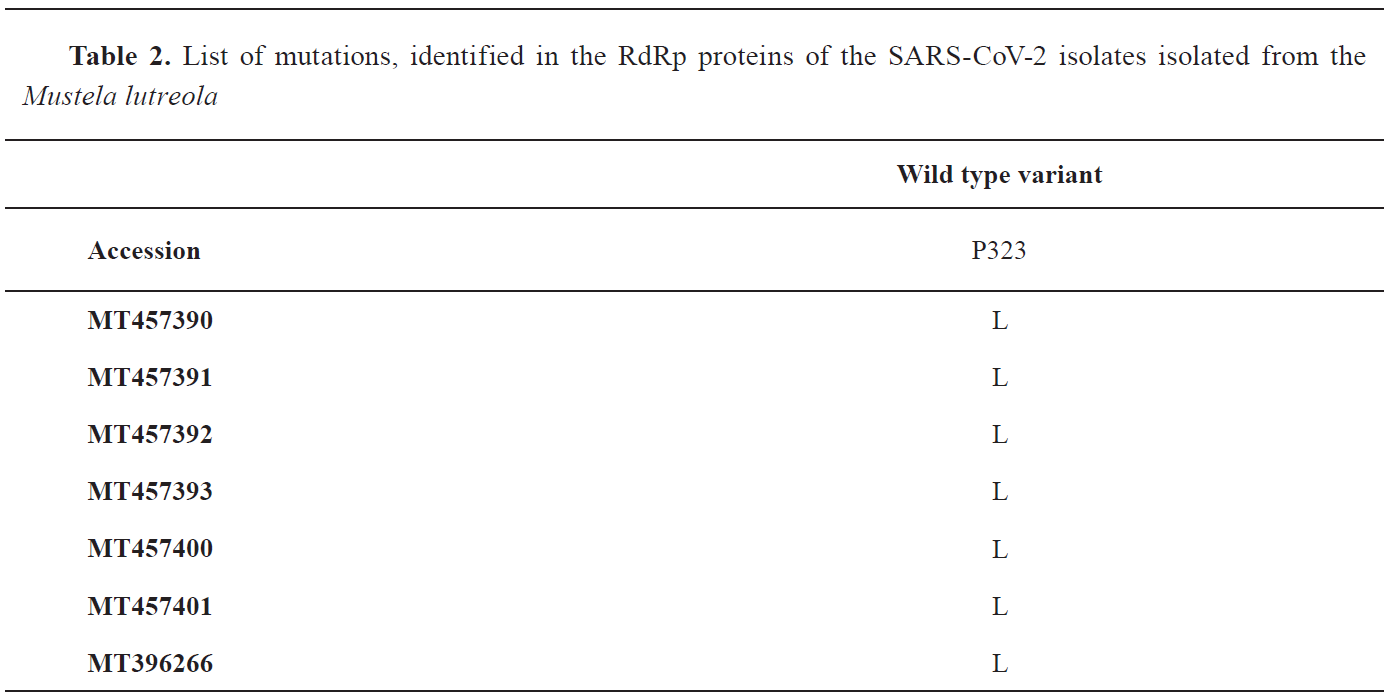 In total 127 SARS-CoV-2 genomes from the human host were analyzed. In this analysis, the Wuhan RdRp domain sequence was counted as an original (wild type). Identified mutations are listed in Table 3 and shown in Supplementary Fig. 1 and 2 (6). Mutations in 6 positions were identified: G179S, E278D, P323L, L329I, A449V, A660S. Interestingly, the P323L single mutation was the most common and detected in more than half of the analyzed countries. The G179S single mutation was identified only in one of two analyzed Malaysia isolates (MT372481), and A660S – in the Japanese. P323L and A449V double mutation were found only in Greece isolate. Two double mutations (E278D and P323L, P323L and L329I) were found only in isolates from India (Table 3). 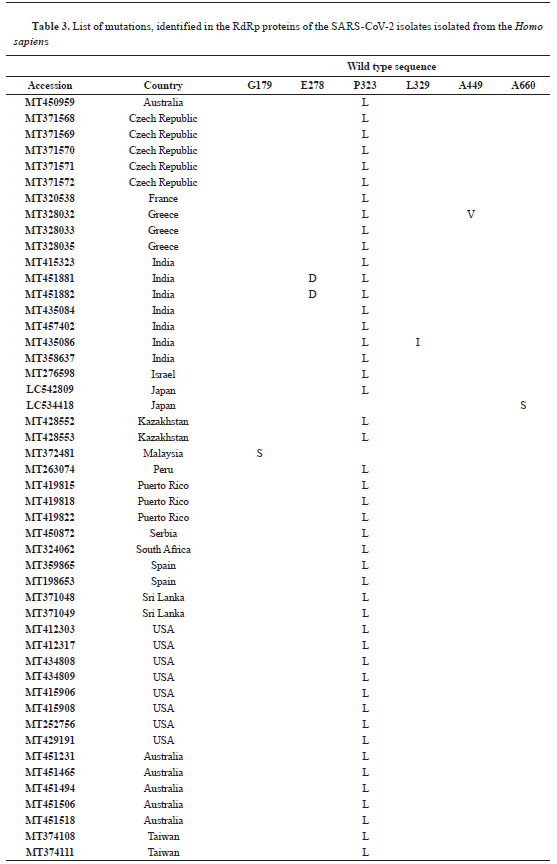 Effect of mutations on the free energy and protein stability
To determine how identified mutations could influence RNA-directed RNA Polymerase tertiary dynamics and stability, we used 3 different tools, based on discrete algorithms. Mutations have been examined individually and in combinations (Supplementary Table 6 and 7) (6). In total, the amount of the conservative and radical mutations was almost equal, although radical mutations have provided a higher effect on the free energy change. Single mutations with the highest change in free energy are highlighted in bold in Supplementary Table 6 (6). The most common mutation in human and mink isolates (P323L) (consistent with at least two used tools) is the only stabilising type of mutation. The second human mutation with the highest change in free energy is A660S, the radical mutation that was predicted to have a destabilizing effect. Single mutations of the Rhinolophus sinicus are almost equal by nature (14 radicals / 10 conservatives).
Three of them are destabilizing (A128S, G711S and L278F) and two are stabilizing mutations (H772Q and conservative R138K). The L278F mutation is the only mutation confirmed by several tools. The dual, triple, and multiple mutations with the highest change in free energy, identified in the human and Rhinolophus sinicus RdRp domain, are stabilizing types (Supplementary Table 7) (6).
The only significant positive change of ΔΔS VibENCoM was detected for the R754C radical mutation of the Rhinolophus sinicus, suggesting a gain in flexibility.

We identified 25 mutations in the RdRp domain from the bat-isolated SARS-CoV isolates. Those mutations represent a pool of neutral mutations with mostly minor effects on the protein-free energy. Among screened human isolates we found 6 mutations, one worldwide-present mutation (P323L) was predicted to have a stabilizing effect on the protein tertiary structure. Further research is necessary to understand the effect of the described mutations on the RdRp interaction with other proteins and the emergence of the antiviral drugresistance isolates.

This research was supported by the Vibstec State Academy of Veterinary Medicine.

© 2020 Dabravolski S.A. This is an open-access article published under the terms of the Creative Commons Attribution License which permits unrestricted use, distribution, and reproduction in any medium, provided the original author and source are credited.