Pregnancy-specific protein B (PSPB) is produced by mono and binucleate trophoblast cells in the placenta of ruminants during pregnancy. This study was designed to determine the pattern of serum PSPB in Yankasa ewes during pregnancy and postpartum periods. Mature cycling Yankasa ewes were synchronized and divided into two groups A (n=11) and B (n=13). Group A was bred, while group B was unbred. Blood samples for PSPB assessment were collected from the ewes starting from the day of breeding until 4 weeks post-lambing. All pregnant Yankasa ewes lambed with singleton lambs after an average of 151.18 days. There was a significant (p<0.05) increase in PSPB in pregnant compared with the non-pregnant ewes in the period between 3 weeks post-breeding and 3 weeks post-lambing. Peaks were detected in the first (100.60 ng/ml), second (133.90 ng/ml), and third (114.82 ng/ml) trimesters at 5, 10 and 21 weeks of gestation, respectively, but steadily decreased within 4 weeks (2.38 ng/ml) postpartum. In conclusion, PSPB detected pregnancy in Yankasa ewes from 3 weeks post-breeding with peak levels at 5, 10 and 21 weeks post-breeding in the first, second, and third trimesters, respectively. PSPB decreased gradually after lambing until 4 weeks postpartum.

Sheep are estimated to make up 27% (37.4 million) of Nigeria`s livestock population (1), where they are kept for meat and milk production (2). They also play a socio-economic role in Nigerians’s life, particularly in the northern part where they are kept and used during festive periods such as Eld-el Kabir, wedding, and naming ceremonies (3). Sheep are part of almost all farming systems in Nigeria, where they are associated with mixed farming and pastoralism (4). They are essential in sustaining low-income families, mainly in the rural areas of Nigeria (5). Generally, four breeds of sheep are indigenous to Nigeria, namely Balami, Uda, West African dwarf (WAD) and Yankasa. However, Yankasa sheep is the most abundant breed in Nigeria (2), females attaining puberty at 238±23.4 days at an average weight of 18.4±0.4 kg (6). Adult Yankasa ewes weigh 21.48±0.48 kg, and produce lambs in a singleton to twin ratio of 1:2.8 (7). Pregnancy is the period beginning immediately after fertilization from a fertile mating till parturition (8) and takes about 147–152 days in sheep (9). It is an integral part of animal reproduction, characterized byembryo formation and fetal development due to changes in the physiology of the reproductive tract (8, 9). During this period, several biomarkers, such as enzymes, growth factors, inhibitors, and hormones are released into the circulation (10). Pregnancy specific-protein B (PSPB) is produced during pregnancy in sheep and can be considered as its marker (11).
PSPB is also known as pregnancy-associated glycoprotein (PAG), pregnancy-serum protein 60 kDa, and SBU-3 antigen (10). They constitute a large family of placenta glycoproteins, belonging to a group of proteolytic enzymes known as aspartic proteinases (12). These proteins are produced by mono and binucleate trophoblast cells in the ruminant placenta and then released into the maternal circulation. Its levels in plasma and milk are used for pregnancy diagnosis (13), fetal number assessment (14), pregnancy wastage (15, 16), pregnancy loss (14), and obstetric diseases (17). The concentration of PSPB is influenced by animal species, breed, parity, and sex of the fetus (18, 19). The pattern of PSPB during pregnancy and postpartum periods has been described in some breeds of sheep, such as Churra, Merino (18) and Assaf (20). They have also been described in Boer (21), Moxoto and Canine goats (22), as well as in buffalo cows (23). However, the pattern of PSPB during pregnancy and postpartum periods in Yankasa ewes has not been described to the best of our knowledge. Information on the profile of PSPB in pregnancy will assist in planning feeding strategies to avoid metabolic diseases related to pregnancy, such as pregnancy toxemia and birth of viable and healthy offsprings. In addition, it will contribute to the existing knowledge on the use of PSPB in pregnancy diagnosis and monitoring improving animal productivity and reproductive performance.

Experimental site
The study was carried out at the animalhouse of the Faculty of Veterinary Medicine and Reproduction Laboratory of National Animal Production Research Institute (NAPRI), Ahmadu Bello University, Zaria, Nigeria. Zaria is within the Guinea Savannah zone of Nigeria, between 110 and 120 North and between 70 and 80 East at 650 m above sea level.

Experimental animals
Thirty cycling Yankasa ewes aged between 1.5 and 2.5 years, with an average weight of 19±1.14 kg were used for this study. The animals were acquired from the small ruminant flock of NAPRI and local markets around Zaria, Nigeria. They were acclimatized for 6 weeks and screened for common parasites during this period. The animals were fed on hay and concentrate supplements in the morning and evening, whereas water and salt-blocks were given ad libitum. Ethical approval for this study was obtained from the Ahmadu Bello University Committee on Animal Use and Care, with approval number ABUCAUC/02/2013/001.

Experimental design
Following acclimatization, estrus synchronization was achieved using 5 mg of Lutalyse® (Dinoprost tromethamine). Twenty-six ewes showed signs of estrus. Thirteen out of the twenty-six ewes were bred with rams of good fecundity (sperm volume 0.72 ml, sperm concentration – 300x106; percentage of live sperm 97.65%; sperm abnormalities - 20%), while the remaining ewes were unbred. Pregnancy was determined by non-return to estrus and persistent high blood levels of progesterone (P4) 18-24 days post-breeding. The bred and unbred ewes were tagged and grouped as A and B, respectively. On day 45 post-breeding, two ewes in group A were diagnosed non-pregnant by ultrasonography (Medison SA600V, Germany) and subsequently excluded from the study. Blood samples were collected on a weekly basis (7±1 day) in the period between the onset of breeding and four weeks post lambing in ewes of both groups.

Blood collection and analysis
About 5 ml of blood was collected weekly from the jugular vein of each ewe into plain test tubes and centrifuged at 9,000 g for 5 mins. Blood serum was harvested and stored at -20 oC until analysis.

Assay for pregnancy-specific protein B
Enzyme-linked immunosorbent assay was carried out on the serum samples using bioPRYN quantitative PSPB ELISA kits (Biotracking LLC; Moscow ID) to determine the concentrations of PSPB in the test samples. The manufacturer`s instructions were followed, as previously described by Adeyeye et al. (17). Values of obtained optical density were added into an Excel package pre-programmed by the manufacturers, from where actual PSPB values were obtained. The test kit had a sensitivity of 99.9% and a specificity range of 90-99%.

Data analysis
Data of PSPB values were analyzed using t-test of GraphPad (2000) and presented as mean ± error of mean in graphs. Values of p<0.05 were considered statistically significant.

All ewes in group A lambed singleton lambs after a mean ± standard error gestation length of 151.18±0.58 days. The profile of PSPB during pregnancy is presented in Fig. 1. The mean weekly profile of PSPB ranged from 0.27 to 133.90 ng/ml and 0.10 to 0.97 ng/ml in pregnant and non-pregnant ewes, respectively. There was no significant (p>0.05) difference in serum PSPB levels between pregnant and non-pregnant ewes from the time of first standing heat to the second-week post-breeding. However, serum PSPB significantly (p<0.05) increased in pregnant ewes compared to non-pregnant ewes in the period between the third-week and the time of parturition. In the first trimester, PSPB levels peaked at the fifth-week post-breeding with a mean of 100.60 ng/ml, while the peak in the second trimester occurred at the tenth-week post-breeding with a mean of 133.90 ng/ml. There was a gradual increase in PSPB levels in the third trimester reaching the peak a few days before the parturition. 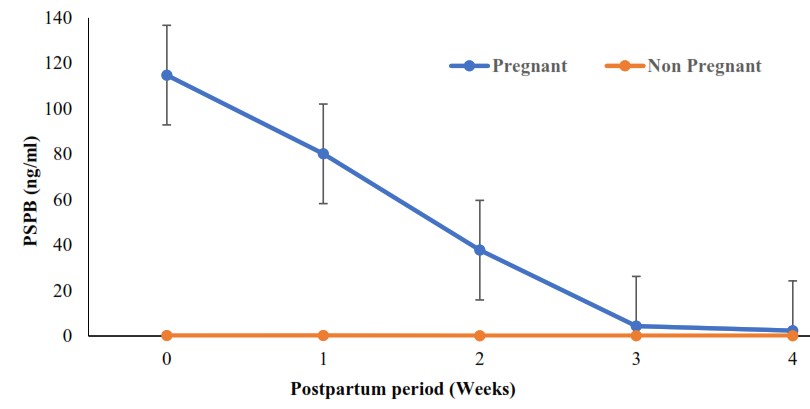 The study showed that serum PSPB concentrations increased in pregnant ewes from week 3 post-breeding. It also showed that peak levels of PSPB in pregnant Yankasa sheep occurs at week 5, 10, and 21 post-breeding in the first, second, and third trimesters, respectively. PSPB decreased gradually after lambing until fourthweek postpartum.

The authors appreciate Prof. Jerome Jefu former Executive Director and Prof. P.I. Rekwot former Assistant Director (Research) both of the National Animal Production Research Institute (NAPRI), ABU, Zaria, Nigeria for providing some of the animals used for this study. The support we received from Dr. Josh Branen of Biotracking Inc. Moscow, USA is also appreciated. We thank Mr. S. I. B. Bolaji of the Reproduction Laboratory, NAPRI-ABU, Zaria, Nigeria for his technical assistance.

© 2021 Adeyeye A.A. This is an open-access article published under the terms of the Creative Commons Attribution License which permits unrestricted use, distribution, and reproduction in any medium, provided the original author and source are credited.

The authors have declared that no competing interests exist