Listeria monocytogenes is a Gram-positive, non-sporing, bacilliform bacterium that is relatively heat-tolerant, widely dispersed in nature, and can be found in raw milk. As a psychrotroph, this bacterium grows well in the refrigerator during storage (1). L. monocytogenes causes listeriosis which is a worldwide zoonotic disease. It enters the body by contaminated foods such as cheese and vegetables, causing meningoencephalitis, rarely affecting other organs. Neonates, pregnant women, the elderly and immunosuppressed people are considered to be a risk group for this disease (2). Traditional cheeses can be considered as one of the main sources of pathogens due to the unsanitary production and storage conditions. The prevalence of L. monocytogenes in cheeses produced from raw milk compared to those produced from pasteurized milk is higher (3). Furthermore, the prevalence of L. monocytogenes in soft and semi-soft cheeses due to their high moisture content is higher than in hard cheeses (4).
It is reported that about 1-5% of food-borne intoxications are associated with the consumption of milk and dairy products, among which 53% have been due to the consumption of contaminated cheeses (5). The presence of 103-104 cfu of L. monocytogenes per gram of cheese can cause disease. However, in people with weakened immune systems, the infectious dose is probably less than 1,000 bacterial cells (6). Khedmati Morasa et al. (7) showed that 2.3% of Lighvan cheese in Qazvin (central part of Iran) was contaminated with L. monocytogenes. Lighvan cheese is a white brine cheese that is usually made of cow, buffalo, goat milk, or its mixture (8). Raw milk is used in the traditional production of Lighvan cheese. Annually, at Lighvan village (located in the Northwest of Iran), nearly 3,150 tons of Lighvan cheese are produced (8). In the traditional method of Lighvan cheese production, raw milk is coagulated by rennet, and the resulting clot after dehydration is cut into pieces. Then, salt is added and the pieces are put into cans, adding brine as well. Afterward, the produced cheeses are allowed to go through a ripening period of 3-12 months at 10 °C (9). Many stages of cheese production are performed manually using traditional equipment, thus increasing the risk of contamination with spoilage germs, especially animal, human (workers) and environmental pathogens. All these factors reduce the hygienic quality and shelf life of this product (8, 10). The most effective way of protecting dairy products from pathogenic germs could be a sufficient heat treatment, which is not widely accepted by rural producers due to its adverse effect on sensory properties and milk quality (11). Local cheeses are produced by heating below 50 °C, which is insufficient to kill most microbes (12). Due to the cultural habits of people to consume foods without chemical preservatives, the food industry utilizes plants as a source of antimicrobial and flavoring compounds (13). This alternative is a suitable solution to control pathogenic bacteria and increase food shelf life.
Echinophora platyloba DC is a native plant in Iran and is traditionally used as a food flavoring in yogurt and cheese (14, 15). Recently, the essential oils and extracts of this herb have been introduced in the dairy industry, yielding promising results as long-term preservative and flavoring agents in yogurt and cheese. Flavonoids and other phenolic compounds are widely distributed in plants having diverse biological effects: antioxidant, antimicrobial, anti-inflammatory and vasodilatory. Phenolic compounds in plant extracts with antioxidant properties can play an important role in preserving food products and maintaining human health (16). The aim of this study was to investigate the effect of various concentrations of E. platyloba ethanolic extract (0-1.5%) on the survival of L. monocytogenes in Lighvan cheese during 90 days of ripening time.

Collection and identification of E. platyloba
E. platyloba was purchased locally from a medical plant supplier in Maragheh city (Eastern Azarbaijan province, Northwest of Iran) and was transferred to the herbarium of Islamic Azad University, Maragheh Branch for identification.

Evaluation of antimicrobial activity by microdilution method (In vitro)
Minimum inhibitory concentration (MIC) and minimum bactericidal concentration (MBC) methods were used for the determination of the antimicrobial effect of E. platyloba ethanolic extract. For this purpose, L. monocytogenes PTCC 1298 (provided by Iran industrial research organization) was cultured in sterile Brain Heart Infusion (BHI; Merck company, Germany) for 24 hours at 37 °C. The serial dilutions were prepared using Müller Hinton Broth medium (MHB; Merck company, Germany) from 20 to 0.039 mg/ml. MIC test was performed by microdilution method. First, 100 μL of MHB was added to each well (except for the first well). Then, 100 μL of the ethanolic extract with a concentration of 20 mg/ml was poured into the first and second wells, and 100 μL was transferred from the second well to the third well. This procedure was continued to the 10th well. Therefore, dilutions of 20 to 0.039 mg/ml of ethanolic extract were prepared. A 100 μl of the fresh bacterial culture (the equivalent of concentration of 0.5 McFarland test) was added to each well and incubated at 37 °C for 24 h. After 24 h, the presence of turbidity (compared to the control row) indicated bacterial growth, whereas transparency indicated no bacterial growth. The lowest concentration in which no bacterial growth was observed was considered as MIC. A higher and a lower concentration than the MIC were selected and cultured in BHI agar medium and incubated at 37 °C for 24 h. The first plate associated with the well that did not show bacterial colony was considered as the ethanolic extract MBC (2.5 mg/ml). The MBC was defined as the concentration in which no microorganism growth was observed (17, 18). All of the tests were repeated in three replicates and the means of the results were considered as MIC and MBC. Finally, three concentrations that were higher than MBC (20 mg/ml) were considered to be added to the raw milk.

Analysis of raw milk
The characteristics of raw cow milk were analyzed before the cheese making. Acidity was determined based on Dornic degree by the AOAC method (19). The amount of fat was measured by the Gerber method (20). The Kjeldahl method was considered for protein measurement (21).

Manufacture of Lighvan cheese and addition of ethanolic extract
Rennet was added to 1 L of raw milk together with 10 ml of L. monocytogenes PTCC 1298 broth (the equivalent of turbidity of 0.5 McFarland test (1.5x108 cfu/ml)). The salt concentration for all the samples was adjusted to 6% (w/v). Three concentrations of the ethanolic extract of E. platyloba (0, 0.5, 1 and 1.5%) were added to the samples. Sampling and microbial enumeration of the samples were performed at 15, 30, 60 and 90 days after the addition of rennet.

Enumeration of L. monocytogenes in Lighvan cheese
Ten grams of homogenized cheese were added to 90 ml of sterile distilled water. The mixture was vortexed for 5 minutes. Then, serial dilutions of samples (10-1 – 10-7) were prepared and cultured on Listeria Palcam Agar (Merck, Germany) containing potassium thiocyanate (37.5 g/L) and nalidixic acid (50 mg/ml), and were incubated at 37 °C for 48 h. After the incubation period, microbial enumeration was performed.

Evaluation of pH and salt concentration in Lighvan cheese
At 15, 30, 60 and 90 days after rennet addition, the salt concentration and pH of the cheese were measured simultaneously with the L. monocytogenes enumeration of the samples.

L. monocytogenes enumeration, assessment of pH and salt concentration in Lighvan cheese
As it is evident from the results shown in Table 1, the logarithm of L. monocytogenes population (log cfu/g) was significantly decreased over the ripening time for the control samples (p<0.05).

As it can be seen in Table 2, the increase in level of E. platyloba ethanolic extract addition led to a significant diminution in population of L. monocytogenes (log cfu/g) for the Lighvan cheese samples at day 15 of ripening (p<0.05).

Simultaneous increment in the levels of added E. platyloba ethanolic extract and time resulted in a statistically significant decrement in L. monocytogenes population logarithm in Lighvan cheese (p<0.05), whereas no significant influence on pH and salt concentration were observed (p>0.05) (Table 3). L. monocytogenes was not detected for two treatments (at concentrations of 1% and 1.5% of E. platyloba ethanolic extract) at day 90 of the ripening. 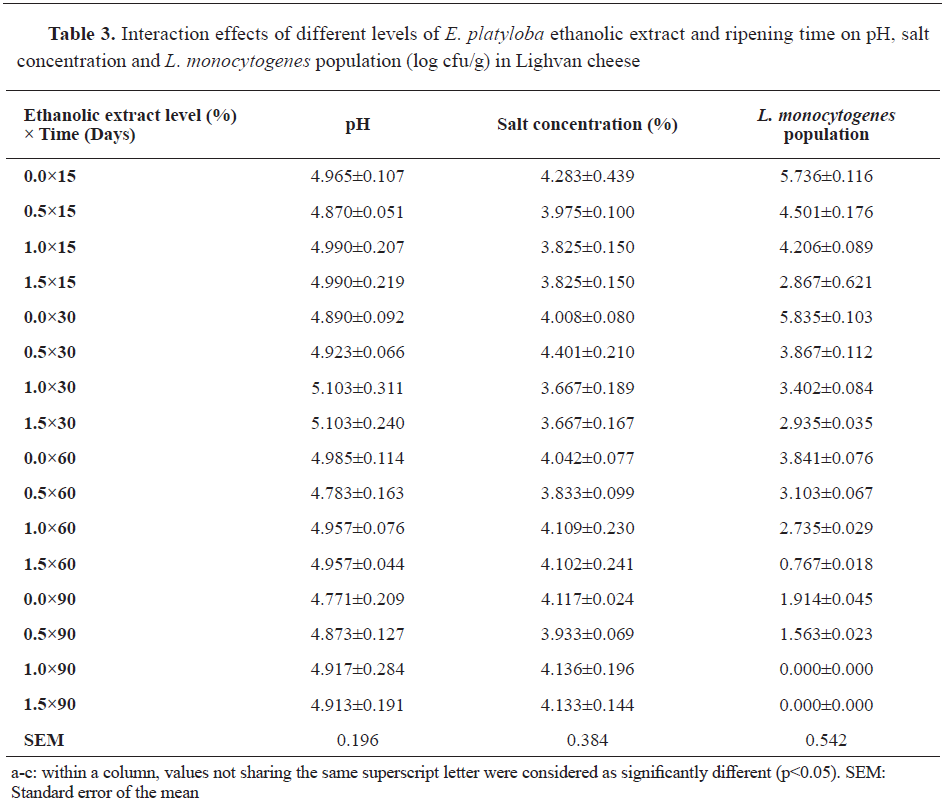 This research was supported by the Maragheh Branch, Islamic Azad University.

© 2021 Ghaderi S. This is an open-access article published under the terms of the Creative Commons Attribution License which permits unrestricted use, distribution, and reproduction in any medium, provided the original author and source are credited.

The authors have declared that no competing interests exist