Trypanosomosis is a wasting disease of animals that is widespread in tropical areas of Africa and South America (1). It is characterized by anemia, intermittent fever, anorexia, respiratory distress, lacrimation, nasal discharge, edema, enlarged lymph nodes, central nervous system disorders, corneal opacity, reproductive disorders and death in severe cases (2, 3, 4, 5, 6, 7). The disease is caused by blood parasites of the family Trypanosomatidae and genus Trypanosoma (8). The most pathogenic trypanosomes with the widest range of hosts in domestic animals are Trypanosoma brucei, T. congolense and T. vivax (9). Other species are T. evansi, T. equinum, T. equiperdum, T. simiae and Trypanosoma cruzi affecting different species of domestic animals and man (9, 10). Trypanosomes are either transmitted biologically (cyclically) by Glossina or mechanically by hematophagous flies (11). There is evidence of transmission via the placenta (12, 13, 14).
Trypanosoma brucei brucei is the causative agent of African animal trypanosomosis (15). It is a salivarian protozoan belonging to the Trypanozoon sub-genus (9, 15). Other members of the sub-genus are T. brucei gambiense that causes human African trypanosomiasis (HAT) in West Africa and T. brucei rhodesiense the causative agent of HAT in East Africa (8). T. brucei brucei causes a varying degree of disease associated with the reproductive system among domestic animals. In males, it is characterized by poor quality semen, decreased testosterone level, penile protrusion, preputial inflammation, scrotal dermatitis, loss of libido, increased reaction time, sperm abnormalities, orchitis and severe testicular degeneration (5, 16, 17, 18, 19, 20). In females, it is manifested by abortion, stillbirths, posterior paresis as well as reproductive and endocrine lesions (21, 22, 23, 24).
Reports on the extent of reproductive damage caused by trypanosomes abound in the literature. However, information as to the period infected males rendered unfit for breeding is lacking. Apart from the studies by Adamu et al. (25) who determined the chronological testicular and epididymal damage in T. vivax infected zebu bulls, no other report is available to the best of our knowledge. However, T. brucei group has a wider host range than other trypanosomes among domestic animals (15). This study was therefore designed to determine the period rabbit bucks infected with T. brucei brucei are unfit for breeding.

Experimental animals
Fifteen adult local rabbit bucks with an average weight of 1.29 kg were acquired from the livestock market in Sokoto metropolis, Nigeria. The bucks were kept in fly-proof pens and fed grower’s ration daily as well as spinach and lettuce every other day. Water was provided ad-libitum and they were allowed to acclimatize for three weeks. During this period, they were examined, screened and treated prophylactically for coccidiosis using amprolium 250 WPS.

Source of Trypanosome
The T. brucei brucei isolate used in this study was obtained from the Department of Parasitology Ahmadu Bello University (ABU), Zaria, Kaduna state, Nigeria. About 0.2 ml of blood containing the isolates were inoculated intraperitoneally into albino rats and transported by road from Zaria to Sokoto (about 390 km). The parasite was maintained by serial passage of rats until use.

Experimental design
The bucks were randomly assigned into two groups (A and B). Group A comprised 8 bucks infected with blood containing about 1×106 parasite of T. brucei brucei, while group B comprised 7 bucks being the uninfected control. Venipuncture of their ear vein was done daily after the first day of infection to determine the prepatent period as described by Woo (26). The bucks were also observed for clinical signs of trypanosomosis. Parasitemia was estimated daily until patency was established (26). Subsequently, it was determined at 3-4 days interval throughout the study.

Pathology studies
One rabbit buck was humanely sacrificed from groups A and B on days 9, 19, 29, 38 post-infection (pi). Their testis and epididymis were harvested and grossly examined. The samples were placed in Bouin’s solution and processed for histopathological studies. The degree of testicular degeneration was scored as mild, moderate, or severe by examining the level of damage to the germinal epithelial cells of the testis as described by Sekoni et al. (27). The epididymal sperm reserves were estimated by examining a minimum of 50 epididymal tubules at ×100 as described by Adamu et al. (25). The number of tubules with normal sperm reserve out of the total examined number was expressed as a percentage of epididymal sperm reserve.

The pre-patent period of the infected rabbit bucks ranged from 2 to 3 days with a mean ±SD of 2.71±0.49 days. The infected bucks had rough hair coats, alopecia, pyrexia, mucoid ocular discharge, epistaxis, and progressive anemia. The parasitemia findings are presented in Fig. 1. Parasitemia was first detected on day 2 and peaked to 12.5x105/ml by day 3. The second peak of 10.0x105/ml was on day 6 which gradually decreased and spiked again up to 4.0x105/ml on day 35. 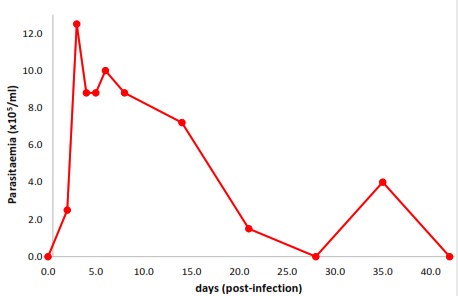 There were no gross lesions seen on the testes and epididymides of infected bucks sacrificed on days 9 and 19. However, infected bucks sacrificed on days 29 and 38 showed adhesion of the testes and epididymides to the scrotum. These lesions were not observed in the control group. The histology of the testis and epididymis of rabbit buck from the control group with evidence of spermatogenic activities in the seminiferous tubules and a full epididymal sperm reserve are given in Fig. 2A and 2B.

The infected buck sacrificed on day 9 had no testicular degeneration. The seminiferous tubules were normal with evidence of spermatogenic activity, although the epididymis had tubules devoid of spermatozoa. The majority (88%) of the epididymal sperm reserves were filled with spermatozoa (Fig. 3A and 3B; Table 1).

Figure 3. Photomicrograph of rabbit buck at day 9 post T. brucei brucei infection showing testis with normal seminiferous tubules and evidence of spermatogenic activity (black arrows) (A) and epididymis with spermatozoa in most tubules (black arrows) and a tubule devoid of spermatozoa (red arrow) (B). (H&E×100; Bar-50μm)

In the infected buck sacrificed on day 19, there was moderate testicular degeneration in the testis characterized by atrophied seminiferous tubules and reduced spermatogenic activities. The epididymis was devoid of sperm reserve but contained proteinaceous fluid (Fig. 4A and 4B; Table 1).

The testis of the infected buck sacrificed on day 29 was severely degenerated with the proliferation of fibrous tissue (Fig. 5A), while the epididymal sperm reserve was empty (Table 1). The infected bucks sacrificed on day 38 showed the most severe degeneration with atrophied seminiferous tubules, a severe proliferation of fibrous tissue and cellular infiltration by eosinophilic cells (Fig. 5B). In the epididymis of the same buck, the sperm reserves were empty, devoid of spermatozoa (Table 1).

The prepatent period (PP), clinical signs and anemia observed in this study are similar to those observed in our earlier studies in rabbits (5). However, the PP was shorter than 4.70±0.85 days reported by Ezema et al. (29) in T. brucei infected crossbred rabbits. This may be associated with the differences in rabbit breed and virulence of the parasite, which is believed to be an important factor in the establishment of trypanosome infection (30). The shorter PP in this present study may suggest that the T. brucei isolates used are more virulent thereby increasing its ability to establish infection in the bucks. The clinical signs of rough hair coat, alopecia, pyrexia, ocular discharge epistaxis and progressive anemia are consistent with findings in earlier studies of trypanosomosis (2, 3, 5, 31, 32).
There were no pathological changes in the testis and epididymis of infected bucks sacrificed on day 9, except for mildly depleted epididymal sperm reserves with an estimated reserve of 88%. The depletion may be caused by decreased blood glucose and subsequent low levels in seminal plasma. Glucose is the major source of energy utilized for motility and maturation by spermatozoa, particularly along the epididymis (33). Trypanosomes have been reported to utilize glucose for their metabolic processes during the peak of parasitemia (3, 34). The depletion in the epididymal sperm reserves in this present study occurred 3 days after the second peak of parasitemia. Bucks at this stage may be used for breeding considering the mild degeneration seen on day 9. For the infected buck sacrificed on day 19, there were no gross lesions, although histologically, the seminiferous tubules were atrophied with reduced spermatogenic activities. Also, most of the epididymal sperm reserves were empty but contained proteinaceous fluid. Atrophy of the seminiferous tubules has been reported in T. evansi infected camels (20) and sheep infected with T. brucei (19), and T. vivax (35). Atrophy is the result of progressive testicular degeneration (36), which is caused by intermittent fluctuations in temperature and invasion of the testis by the parasite. The pyrexia may have led to the arrest of the process of spermatogenesis due to increased testicular temperature, resulting in testicular degeneration (10). T. brucei is a tissue invasive parasite capable of causing damage to the testicular parenchyma (37). Also, Carvalho et al. (38) demonstrated severe tissue damage and rupture of epididymal ducts by the parasites in the stroma of the epididymis. This may have enhanced the reduced spermatogenic activity seen on day 19 and the empty epididymal sperm reserves. The presence of proteinaceous fluid in the epididymis may be suggestive of debris of necrotizing sperm cells (25). On day 19, the buck is unfit for breeding even though spermatogenesis has not been completely arrested. The empty epididymis affected by degeneration implies infertility. The sperm maturation, concentration, and transport in the affected epididymis will be compromised (33). However, chemotherapy using antitrypanosomal agents may be effective.
By day 29, degeneration with the proliferation of the fibrous tissue in the testis was observed. The degenerative changes were characterized by necrosis of interstitial cells and destruction of cellular structures within the seminiferous tubules, similarly with the findings of other studies (20, 38, 39). These changes could be ascribed to the invasive nature of the parasite. At this stage (day 29) the parasite is absent in the blood circulation whereas the genital organs are massively invaded. Moreover, the persistent fluctuation in temperature could be a contributory factor as observed in earlier studies (3). The seminiferous tubules are temperature sensitive and their activities can be altered by minor temperature fluctuations. With the necrosis of the interstitial cells, testosterone production and spermatogenesis are compromised. The proliferation of fibrous tissue suggests the onset of the chronic stage of infection, which often leads to the replacement of normal cells (38). The epididymal sperm reserves were devoid of spermatozoa, expected due to the severe damage of the testicular germinal epithelium that renders the bucks unfit for breeding. There were marked changes in the buck on day 38, similar to those seen on day 29. In addition, there was eosinophilic infiltration of the seminiferous tubules, signifying a break in the blood-testis barrier. The Sertoli cells responsible for this barrier may have been destroyed completely giving rise to the infiltration. Although the hypothalamus and pituitary gland were not monitored in this study, there are possibilities that they may have been affected and contributed to the cessation of spermatogenesis. Studies have demonstrated degenerative processes in these endocrine organs during trypanosome infection (4, 23, 38, 39). This has been observed in camel (20), bulls (27), gazelles (40), boar (41), ram and buck (7, 42). Further studies should elucidate the time-related changes in gonadal tissues of large animals and the use of anti-trypanosome agents in restoring bucks fertility following infection.

AAA made the conceptualization, designed the methodology and critically reviewed the final draft. MOA was involved in designing the work and supervision. MBA, LLH and AA collected and processed samples, analyzed the data and jointly wrote the first draft. All authors approved the final version for submission.

© 2021 Adeyeye A.A. This is an open-access article published under the terms of the Creative Commons Attribution License which permits unrestricted use, distribution, and reproduction in any medium, provided the original author and source are credited.