Hyperthyroidism is the most frequently diagnosed endocrine disorder in cats. Therapy may include pharmacological, surgical (thyroidectomy), radioactive (iodine), and dietary treatment. The choice of treatment is believed to be strongly influenced by the veterinarian’s experience, level of education, and knowledge of the current scientific literature. The history of survival rates can affect the decision for treatment by both the veterinarian and the owner. This study aimed to explore the longevity in cats diagnosed with hyperthyroidism and to identify significant variables which affect survival rates by using retrospective data from the practice. A multivariate Cox regression was applied with the following results: surgical thyroidectomy and methimazole medication produced similar longevity (median 23.5 months, P>0.05); Domestic Short Hair cats survived longer than pure breeds (median 27.2 vs 9.4 months, P<0.05); as do cats without chronic renal disease (median 28.1 vs 6.2 months, P<0.001); and those with low activities of alanine aminotransferase (median 27.1 vs 17.0 months, P<0.01). Hyperthyroidism is comorbid with renal diseases, but no cumulative effect was found on survivability. There was no difference in survival rates between surgical and pharmaceutical treatment, therefore the discussion of treatment options with owners can focus on other factors (e.g., cost, owners’ compliance, cats’ tolerance to medication, presence of comorbidities). We propose that surgery may be the preferred treatment when the survival rates are expected to be higher than one year. This would avoid high costs and potential side effects of medication.

Hyperthyroidism (HT) is the most frequently diagnosed endocrine disorder in cats (1, 2). It is a clinical syndrome that is manifested with overproduction of the thyroid hormones thyroxin (T4) and triiodothyronine (T3), particularly affecting the geriatric age group (3).
The treatment options include pharmacological therapy often via the use of methimazole (MM), thyroidectomy (ST), radioactive iodine therapy (131IT) (4), and a low iodine diet. The diet provides iodine for the production of thyroid hormone; thus, hyperthyroidism can be managed by limiting the dietary intake of iodine (e.g., feeding with complete Hill’s® Prescription Diet® y/dTM Feline) (5).
The experience, education, and knowledge of the current scientific literature can highly affect the veterinarian’s treatment choice (6).
MM is one of the most commonly used drugs for the long-term treatment of HT in cats not submitted to surgery (7). The ST is widely performed, but post-operative complications may result from the anaesthesia or by a recurrence of hypoparathyroidism and HT both in unilateral and bilateral ST (8). In a recent study including UK veterinarians, 66% of the respondents preferred oral medication, and 28% ST (5).
Several authors (9, 10, 11, 12) studied survival in cats after 131IT, but there are no studies comparing survivability in cats diagnosed with HT and treated with MM or ST. Williams et al. (13) studied survival rates in cats treated with MM or with a combination of MM and ST but did not investigate the differences between both therapies.
HT is prevalent in geriatric cats, as are several other diseases that can be comorbid and interactive with HT (e.g., heart, kidney, and liver diseases). High activities of liver enzymes can be associated with HT (14) and oral MM drug administration can have side effects including vomiting, anorexia, and less frequently, hepatotoxicity (8). The history of survival rates following treatment can highly affect the clinical staff and owner’s treatment choice. Higgs et al. (6) reported that 95% of the respondents (veterinarians) stated that the owner’s compliance with the medication protocol, drug administration, and comorbid disease in patients, are important factors in formulating a management plan. However, they note that there is a lack of consensus on the impact of comorbid disease.
By using retrospective data from the practice, the study aimed to explore the survivability in cats diagnosed with HT, and to identify variables that can significantly indicate survival rates based on the treatment, breed, age, and comorbid conditions at the time of diagnosis. These indicators and the associated costs would be important for the clinical staff and clients to decide the appropriate treatment plan. To the best of our knowledge, no similar study has been conveyed prior to the publication of this paper.

This longitudinal study used retrospective data from cats diagnosed with HT and followed up between 2010 and 2019 from the Blythwood Veterinary Group in NE London. Feline patient records contained information including date of birth and diagnosis of HT. The diagnosis was based on the patient’s history, clinical findings, and laboratory findings of high T4 concentrations. In HT-suspected cases where T4 was below 66 nmol/L, another measurement (equilibrium dialysis) was performed 4 to 6 weeks later from a new sample (13.2% of the cats). The range of observations varied between 37 and 90 nmol/L for total T4 concentration (reference intervals 30 to 60 nmol/L), and between 58 and 162 nmol/L for serum T4 (reference intervals 12 to 50 nmol/L). Only cats that either began MM or underwent ST were included in the study. They were subject to one treatment only. Cats with renal and liver disease or cardiac murmur that were included in the study had been diagnosed for these conditions before the HT diagnosis. Response to treatment (MM or ST) was evaluated by a decrease in the measurement of T4 and only cats that reacted positively to treatment were included (concentration of T4 below 50 nmol/L in 4 weeks, 40 nmol/L in 12 weeks, or 30 nmol/L in 24 weeks after treatment initiation).
Survival time from the date of diagnosis was calculated in months. Most cats were euthanized when their quality of life reached an unacceptable level due to a variety of conditions (decision taken by agreement between clinical staff and owners). Death was recorded on the date when either the cats died from natural death or were euthanized. Cats that were not entirely monitored or remained alive at the end of the study were marked with ‘last seen alive date’ or ‘data collection date’, respectively.
The animals included in the study were subject to routine veterinary procedures and therefore, no ethical considerations were raised. The patient and owner’s confidentiality was provided in all cases.
The following categorical variables were used: breed (domestic short or and pure breed), the enzymatic activity of ALT (high or normal), chronic kidney disease (CKD) (present or absent), cardiac murmur (present or absent), gender (male or female), and treatment (MM or ST). Age at the time of diagnosis (month) was used as a covariate. Different pure breed cats (Maine Coon, Russian Blue, Siamese, Persian, Chinchilla, British Shorthair, Abyssinian, Burmese, and Himalayan) were small in number and were therefore included under the same category ‘pure breed’.
A multivariate Cox regression analysis was implemented. The final adjusted model was obtained via a backward stepwise selection of variables following the Wald test (significance P<0.05). The -2 Log Likelihood test was used to evaluate the fitness of the adjusted model. The interactions between the significant variables were added to the model and tested for significance. Plots of partial survival curves for the different levels of the categorical variables were produced. The analysis was performed using the survival analysis tool of the software IBM® SPSS® Statistics 21.

There was a significant difference (P<0.05) in survival between ‘domestic short hair’ (DSH) (median 27.2 months) and ‘pure breed’ (median 9.4 months); HT DSH cats had a lower hazard death rate and therefore increased survival rate. Cats with HT and CKD showed lower survival times compared to cats with HT but without CKD (median 6.2 vs. 28.1 months, P<0.001). The hazard death rate was higher in cats with both HT and CKD. Cats with both HT and high activities of ALT showed a lower survival time compared to cats with HT and normal activities of ALT (median 17.0 vs, 27.1 months, P<0.01). The death rate was higher in cats with HT and high ALT activities.
The interaction between the variables (high ALT and CKD) was correlated with a significantly lower hazard death rate, therefore suggesting the inexistence of a full additive effect of these conditions in the survivability of cats with HT.
The age at diagnosis was 15.2 years (median, IQR 8.0, 17.1) or 15.3 years (mean, 95% CI, 14.7, 15.9). Age at diagnosis had a significant (P<0.001) negative correlation with survival time (positive correlation with hazard death rate), increased mortality (1.008%/month, or 12.096%/year). The mean age at death was 17.6 years (mean, 95% CI, 16.9, 18.2).
Figures 1, 2, and 3 plot the partial survival functions of these same variables, indicating the survival and hazard death rates. 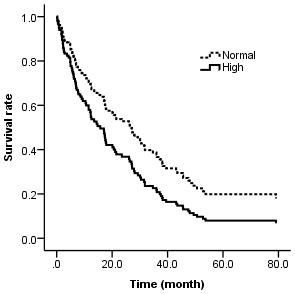 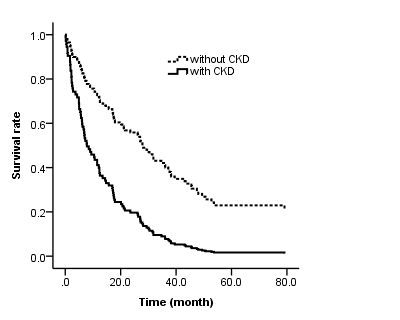 Figure 2. Survival function for cats after hyperthyroidism treatment (pharmacological or surgery), with and without chronic kidney disease (CKD). Partial plot at median values for the other variables. The hazard (death) rate is the complementary of the survival rate 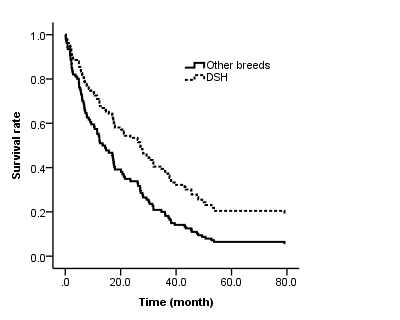 Figure 3. Survival function for cats after hyperthyroidism treatment (pharmacological or surgery), of Domestic Short Hair (DSH) and pure breeds. Partial plot at median values for the other variables. The hazard (death) rate is the complementary of the survival rate

The non-significant difference of survival between surgical and methimazole treatment in HT-diagnosed cats means that the veterinarian/ owner’s decision for treatment would not render significantly different survival rates. A surgery may be preferred in cases when life expectancy is higher, thus avoiding complications related to treatment compliance and possible side effects. Considering the costs involved, the surgery, may also be the treatment of choice from a financial perspective if the life expectancy is higher than one year.

We would like to thank the Blythwood Veterinary Group for the collaboration and collection of data. The research was conducted as a part of the project (Ref. No. UIDP/05937/2020).

FM was leader of the project. FM and RB contributed in all aspects of research and writing.

© 2022 Mata F. This is an open-access article published under the terms of the Creative Commons Attribution License which permits unrestricted use, distribution, and reproduction in any medium, provided the original author and source are credited.