Owing to agricultural intensification, the animals are constantly exposed to many stress factors of both physical and biological nature leading to an ever-increasing load on a living organism. The constant contact with various pathogens increases this load and under certain conditions it leads to the emergence of numerous infectious diseases in animals. At the same time, the use of antimicrobial drugs in veterinary practice is often on a large scale, and in many cases uncontrolled, entailing the formation of antibiotic-resistant forms of microorganisms. This leads to a gradual decline in the effectiveness of antimicrobial agents and a global spread of antibiotic resistance (1).
Additionally, secondary immunodeficiency in productive animals could occur under numerous unfavorable factors including the irrational use of drugs. The treatment may include antimicrobial therapy and stimulation of the natural resistance of the animal’s body. Therefore, to increase the effectiveness of chemotherapy, it is advisable to use complex drugs with antimicrobial and immunomodulatory activity (2).
One of these combined drugs is gentabiferon-B that contains the antibiotic gentamicin and speciesspecific (bovine) recombinant interferons -α and -γ (IFN-α, -γ) (3).
According to the existing legislative norms, all new drug combinations must undergo a preclinical study to assess for potential toxic properties and to determine the spectrum of possible side effects and the conditions for their occurrence (4, 5). Thus, despite the positive effects of antibiotics such as aminoglycosides, this group of antimicrobial agents has numerous side effects, in particular, a pronounced nephrotoxic effect, which is associated with the formation of reactive oxygen species (ROS) (6, 7, 8). Moreover, ROS are known inducers of mutations in animal cells (9).
In addition, the researchers discovered a wide range of biological activity of IFNs that also requires study when they are used as part of a complex drug. Moreover, the study of the physiological effects of the action of recombinant bovine IFNs is possible using the mouse as a model organism since the cross-species activity has been demonstrated in various studies (10, 11). In earlier studies, the antimutagenic effect of IFNs has been demonstrated by their ability to induce apoptosis of cells with damaged DNA and to activate reparative processes (9, 12, 13). The presented data suggest the possibility of the drug to affect the genotoxic ability of experimental mutagens such as mitomycin C (MMC) that may be of scientific interest. MMC, an aziridine-containing agent derived from Streptomyces caespitosus or S. lavendulae, is used as a chemotherapeutic agent for tumors of various etiologies, as well as an experimental mutagen (14). The drug acts by two mechanisms: bioreductive alkylation of nucleic acids with the formation of DNA crosslinks, and by the generation of free radicals, such as superoxide and hydroxyl radicals, following metabolic activation (14, 15). The main side effects of MMC are bone marrow suppression, pulmonary fibrosis, and kidney damage. In addition, MMC is capable of producing mutagenic and toxic effects which are expressed by inducing micronuclei and a decrease in the proportion of polychromatophilic erythrocytes in the bone marrow (14).
The effect of gentabiferon-B on the MMC toxicity and the comparison of its properties with gentamicin and biferon-B which contains recombinant bovine interferons -α and –γ, may be of particular scientific interest. We hypothesized that gentabiferon-B will reduce the toxic and mutagenic effects induced by gentamicin and MMC in mice.
In this regard, the study aimed to determine the effect of gentabiferon-B on the cytogenetic stability of mouse bone marrow cells and to assess its anticlastogenic and antitoxic properties induced by MMC.

Experimental animals
White outbred mice (n=60) weighing 20.0±2.0 g from the vivarium of FSBSI “All-Russian Veterinary Research Institute of Pathology, Pharmacology and Therapy” (FSBSI “ARVRIPP&T”) were used as a biological test system. The experimental animals were kept in standard vivarium conditions (air temperature +18-23 °C, relative humidity 45-60%). Animals were given free access to water and feed.
All procedures with animals were preliminarily reviewed and approved at a meeting of the Bioethical Commission of FSBSI “ARVRIPP&T” before the onset of experimental work (Protocol No. 5-05/21 of 31.05.2021) and complied with the rules adopted by the European Convention for the Protection of Vertebrate Animals Used for Experimental and other Scientific Purposes (ETS 123), Strasbourg, 1986; Directive 2010/63/EU of the European Parliament and of the Council of the European Union of 22 September 2010 on the Protection of Animals Used for Scientific Purposes; Guide for the Care and Use of Laboratory Animals. Washington (DC) 1996; Code of Ethics of the Veterinarian of the Russian Federation, recommended at the XIII Moscow International Veterinary Congress of the Association of Practicing Veterinarians of Russia, 2005.

Experimental drugs
The study drug was gentabiferon-B (LLC Scientific and Production Center ProBioTech, Belarus), which contains an antibiotic of the aminoglycoside group - gentamicin, in the form of gentamicin sulfate, 0.04 g for the active ingredient, and species-specific (bovine) recombinant interferons -α and -γ (IFN-α, -γ), total antiviral activity of at least 1x104 IU/ml (3). Comparative drugs were biferon-B (Scientific and Production Center ProBioTech LLC, Belarus), containing at least 1x104 IU of the total antiviral activity of a mixture of proteins of bovine recombinant interferons –α and –γ in 1 ml of a biological product, as well as a solution of gentamicin sulfate 4% (LLC SPE “AGROFARM”, Russia). The drug Mitomycin-C Kyowa (Kyowa Hakko Kogyo Co., Japan) containing mitomycin as an active ingredient was used as a positive control drug.

Micronucleus test
The frequency of micronuclei (micronucleus test) of polychromatophilic erythrocytes (PCE) in the bone marrow of mice is one of the most commonly used methods with high effectiveness (16). The obtained bone marrow cells were added to 1% albumin solution in Hanks buffer saline solution (pH 7.4) (17) and applied to glass slides. The samples were dried, fixed with methanol, and stained according to Romanowsky-Giemsa (16). The study of bone marrow samples was performed at ×1000 magnification. The frequency of micronuclei was assessed per 1000 PCE; a total of 2000 PCE was evaluated per animal. We also took into account the proportion of PCE per 500 PCE and normochromic erythrocytes (NE), which can be used as a marker of toxicity of the studied drugs (4).

Statistical processing
Statistical data processing was performed using STATISTICA 10 and STADIA 8.0 software packages. The comparison of the samples was carried out using the van der Waerden χ-test at a significance level of p≤0.05 since the studied parameters did not correspond to the normal distribution. The results obtained were presented as the arithmetic mean (M) ± standard error (SE).

Study of mutagenic properties
The level of micronuclei in PCE of the bone marrow of mice was assessed in the studied groups (Fig. 1). 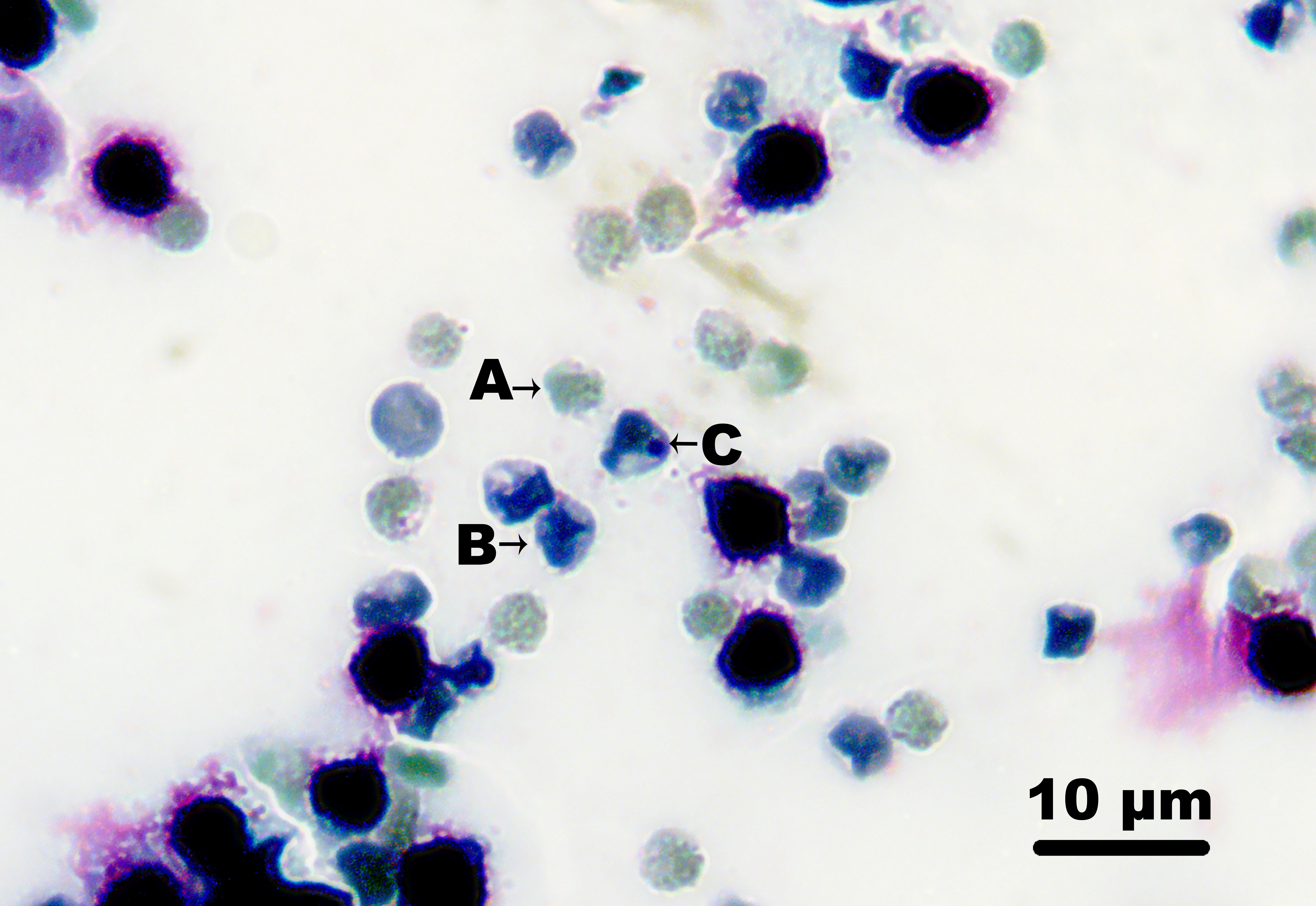 According to the obtained data, the administration of the drugs gentamicin, biferon-B, and gentabiferon-B did not induce a statistically significant change in the frequency of PCE with micronuclei compared to the negative control group (group I), which was 0.40±0.08%. Thus, the frequency of PCE with micronuclei at a single injection of high doses of drugs corresponding to 1/10 LD50 was equal to 0.48±0.08, 0.34±0.07, and 0.54±0.19% in groups II, III, and IV, respectively (Fig. 2). 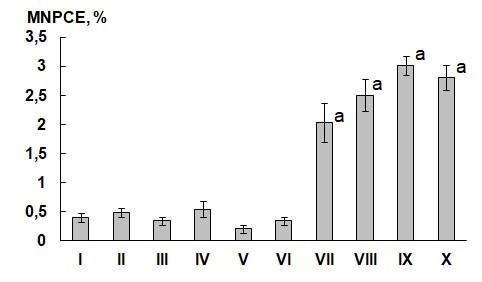 Study of toxic effect
The proportion of PCE with the erythrocytes of other types in the bone marrow of mice was assessed in the studied groups (Fig. 3). The proportion of group I PCE (negative control) was 49.83±2.15%. High and course doses of gentabiferon-B and biferon-B did not affect the PCE content in the bone marrow of mice. Thus, in groups II, III, and VI, the level of PCE did not differ significantly compared to the negative control group (50.45±2.26, 49.98±3.14, 44.49±3.86%, respectively). At the same time, the administration of gentamicin at a high dose (Group IV) induced a decrease in the proportion of PCE to 36.12±3.69% compared to group I. The PCE level with the course administration of gentamicin (Group V) was 34.27±6.60% and was significantly different compared to the negative control group. 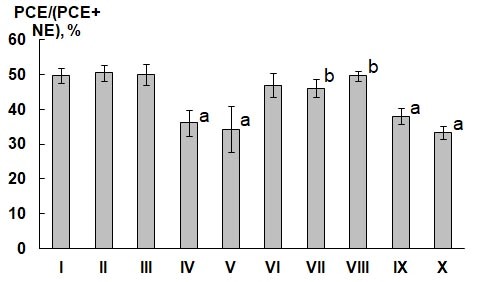 As a result of our studies, the following was consluded. The drug gentabiferon-B does not affect the cytogenetic stability of bone marrow cells according to the level of micronuclei in polychromatophilic erythrocytes, concluding that it does not have mutagenic properties. The course administration of gentabiferon-B together and MMC did not lead to a significant decrease in the frequency of PCE with micronuclei compared to the positive control, concluding that it did not have an anticlastogenic effect. The use of gentabiferon-B reduced the toxic effect of MMC on bone marrow cells, which may be evidence of the antitoxic properties of gentabiferon-B.

The authors thank the staff of the vivarium of FSBSI “ARVRIPP&T” represented by the Head of the vivarium Topolnitskaya A.V. for the help in organizing the study. The experimental work was carried out in accordance with the government assignment No. 122011200146-8 (FZMR-2019-0013).

© 2022 Shabunin S. This is an open-access article published under the terms of the Creative Commons Attribution License which permits unrestricted use, distribution, and reproduction in any medium, provided the original author and source are credited.