Providing good animal welfare standards is very important for wild animals in captivity, especially in zoos. Therefore, the aim of this study was to perform a welfare assessment of elephants in the Skopje Zoo using species-specific protocols. Two specific protocols were used for the welfare assessment and were combined for a more unified approach. These protocols focused on the assessment of the elephant’s day-time behaviour, including Qualitative Behaviour Assessment (QBA), as well as the following sections: nutrition, physical health, environment, behaviour and management. Data was collected from the Asian and African elephants that were housed together, in the Skopje Zoo. Both species were observed for three consecutive days, during which time QBA was performed and they were observed on their daytime behaviour. Feeding (42% African, 34% Asian elephant) and anticipatory (35% African, 22% Asian elephant) behaviour were predominantly observed daytime behaviours of both elephants, as well as stereotypic behaviour (30%) of the Asian elephant. Concerning the QBA, ‘uncomfortable’ (296 Asian, 234 African elephants) and ‘relaxed’ (271 Asian, 280 African elephants) were the most dominant descriptors for both elephants. The collected data indicated that the elephants were in good physical health. Regular feeding enrichment, as well as environmental enrichment was recommended. There is room for improvement concerning the management practices of the elephants.

Some species of animals appear to show poorer welfare in captivity than those in the wild (1). For this reason, it is very important to be able to assess the welfare of animals in captivity, especially in zoos. Elephants have complex behaviours and need for social interactions, as well as need for an extensive and enriched environment (2, 3). In the wild, they have complex social structures consisting of related individuals (4, 5, 6), while in zoos elephant groups often consist of randomly grouped individuals with numbers below the recommended for breeding facilities (5, 7). All of this leads to a difficulty in maintaining their welfare in captivity (2, 3), which may result in stereotypic behaviour and health concerns (2, 3, 8, 9). Due to these reasons, it is important to be able to assess the welfare of captive elephants in zoos. While there are a number of welfare assessment protocols for animals in zoos (3, 10, 11) for the most accurate results it’s probably best to use species-specific protocols. Since 2018, Skopje Zoo has housed an Asian (Elephas maximus) and an African elephant (Loxodonta africana) that, according to available information, have never had their welfare assessed. Therefore, the aim of this study was to assess the welfare of the two housed elephants in the Skopje Zoo and identify which practices are satisfactory according to recommended standards and which have room for improvement.

Welfare assessment was done on the African (Loxodonta africana) and Asian (Elephas maximus) elephant that were housed together in the Skopje Zoo (Fig. 1).

Figure 1. The elephants in their indoor (left) and outdoor (right) enclosure

Prior to being in the zoo, the elephants were circus animals captured in the wild. Two protocols, the Development of a behavioural welfare assessment tool for routine use with captive elephants (12) and the EAZA’s animal welfare framework for zoos and aquariums (13), were combined to create a more unified protocol that was used for the welfare assessment. This protocol contained the following sections: nutrition, physical health, environment, behaviour and management. Each of these five sections had a number of questions that, depending on the assessment, were scored as acceptable/ questionable/unacceptable. Husbandry guidelines (14, 15) were used as a reference base for good animal welfare for the elephants. A more detailed assessment of elephant behaviour was performed by observing their daytime activity and performing a Qualitative Behaviour Assessment (QBA) (Table 1).

An ethogram (12, 16) was used when assessing the daytime activity of the elephants. They were directly observed for three consecutive days from 08:00 h to 16:00 h. This time was divided into four intervals: 8:00-10:00 h, 10:00-12:00 h, 12:00-14:00 h, and 14:00-16:00 h. In each of these four intervals, the elephants were observed for a minimum of 5 minutes for their daytime activity. All ethogramobserved behaviours were written down into a data sheet and recorded as either state behaviours or event behaviours. QBA was assessed using descriptors and a visual analog scale (1-125 score) for each descriptor and later summarised to create a scoring from 4 to 500 for each descriptor. It was assessed during a one-minute observation in each of the four intervals for three days. The collected data were processed in Microsoft Office Excel and presented as descriptive results. 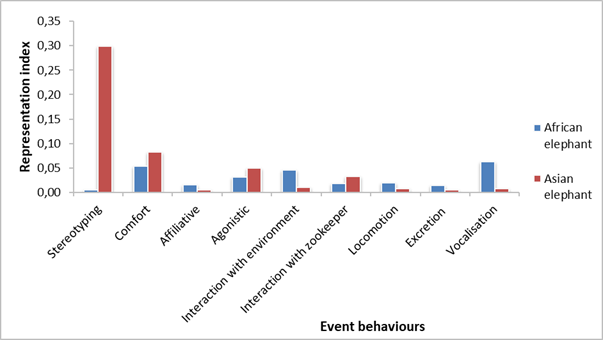 Figure 2. Observed event behaviours in both individuals for all three days

Figure 3. Scoring of the five sections

In this study we were able to identify which practices are satisfactory according to recommended standards and which have room for improvement. Concerning their daytime activity, both elephants spent the majority of their time feeding and performing anticipatory behaviour (Fig. 2). Anticipatory behaviour was manifested in the form of waiting in front of the door so they can enter/exit the enclosure, or waiting in front of the fence for treats and attention from the zookeepers. However, the Asian elephant also spent the majority of her time (>30%) exhibiting stereotypic behaviour in the form of head bobbing and swaying. This is probably due to lack of environmental enrichment (17), social enrichment (18) and the need for foraging (2, 19). Harris M. et al. (8) concluded that Asian elephants stereotyped for 11.6% of the time compared to 3.8% for the African elephants during the daytime. They also concluded that elephants that had been in a circus stereotyped during the day-time significantly more than elephants which had not been in a circus (8). These factors might also have an effect for the high percentage of stereotyping in the Asian elephant.
Concerning the QBA, the Asian elephant seemed uncomfortable and frustrated while performing stereotypic behvaiour, but she also seemed relaxed in her environment. The African elephant seemed relaxed and content in her environment as well, but she also seemed uncomfortable while performing anticipatory behaviour. These results are due to the fact that multiple observations were conducted and therefore two extremes of two opposing states are present, which is the opposite of what would have been obtained during a single observation of the elephants.
The elephants in the institution were well fed with a balanced diet; however, feeding enrichment is recommended such as scattering the feed to encourage foraging and also using puzzle feeders (2, 14, 19, 20). The elephants were in good physical condition; however, regular veterinary check-ups are necessary and written medical records with a detailed medical history for each individual (14, 20). It is also recommended to provide the animals with a more enriched environment such as mud wallows, trees, sand mounds, variation of substrates, browse piles, large rocks, robber balls etc. (14, 20). Both individuals are of different species so housing them together is not recommended due to multiple species differences (20). Furthermore, they were housed in a number that doesn’t fit housing standards for elephants in zoos (14, 20). It is recommended that social groups consist of minimum three females, two males or three elephants of mixed gender (20). Concerning the management of the institution, there is a necessity for implementing certain management protocols such as protocols for emergencies, enrichment, transportation, euthanasia, hand rearing etc. (14, 20).

Welfare assessment was performed on the Asian (Elephas maximus) and African elephant (Loxodonta africana) in the Skopje Zoo for three consecutive days. The collected data indicated that there is room for improvement concerning the management practices of the elephants. Proper management protocols need to be written and implemented, such as protocols for emergencies, enrichment, transportation etc. The animals were well fed, in good physical condition and received daily training. Elephants are intelligent species with a very complex behaviour repertoire so feeding enrichment as well as environmental enrichment are recommended for the improvement of their welfare. Preventive medicine is very important, therefore, written medical records should be kept for each individual and regular veterinary check-up should be conducted.

The authors cordially thank Skopje Zoo for allowing them to conduct this research and for showing the initiative to go one step further towards improving the welfare of these animals. They also thank the staff at the zoo, which cooperated with the authors, provided the conditions for the research and adjusted their work to carry out the necessary observations.

© 2022 Dobrikj E. This is an open-access article published under the terms of the Creative Commons Attribution License which permits unrestricted use, distribution, and reproduction in any medium, provided the original author and source are credited.