Puppies under one year of age are highly susceptible to gastrointestinal disorders resulting in diarrhea (1). Despite its multifactorial etiology, diarrhea may occur due to infectious diseases such as zoonotic and/or non-zoonotic endoparasites including Toxocara canis, protozoans such as Isospora spp., viruses including Canine Parvovirus (CPV) and Canine Coronavirus, bacteria, as well as dietary changes. Diarrhea was classified as acute (3-7 days), prolonged (8-13 days) and chronic (14-21 days) based on its duration (2).
Among the etiology of canine diarrhea, Toxocara canis is an important endoparasite causing acute diarrhea (AD), especially in shelters with poor hygiene conditions. Clinical symptoms due to Toxocara canis are weight loss, anemia, vomiting, intermittent diarrhea, neurological symptoms, and even death due to intestinal obstruction (3). Another important endoparasite in the etiology of canine diarrhea is Isospora spp. Clinical symptoms such as vomiting, abdominal pain, and watery acute diarrhea occur mostly in young, weak, and immunosuppressed animals (4). One of the most common viral agents of acute (CPE) which is a highly contagious, fatal disease (5). Typical findings in CPE are vomiting, severe hemorrhagic diarrhea, and immunosuppression (6). Many bacterial pathogens may play a role in dogs’ bacterial enteritis. Commensal bacterial increase and dysbiosis can cause bacterial or dietary diarrhea. Limited understanding of the nature and complexity of the intestinal flora and lack of specific diagnostic tests limit the ability to identify a broader range of pathogens on a routine basis (7).
Laboratory confirmation of the causative agent(s) of diarrhea in puppies may allow for appropriate treatment. Even though hematochemical parameters are not sufficient to identify the exact cause of AD, they are useful in forming a differential diagnosis list. Irrespective of etiology, AD leads to electrolyte imbalance and dehydration (8). Significant loss of intravascular volume resulting in dehydration may lead to hemodynamic instability, decreased tissue perfusion, cellular hypoxia, hypertension, organ damage, and even death (9). Thus, evaluation of certain clinical, hematological, and serum biochemistry parameters indicating the status of vital organs allows early therapeutic intervention and may prevent target organ damage. Therefore, the aim of this study was to evaluate the hematological and serum biochemistry parameters and to reveal their diagnostic importance in dogs with AD due to non-infectious and/or infectious etiologies.

This study was conducted with the approval of the Harran University Animal Experiments Local Ethics Committee dated 16/12/2021, number 2021/009.

Animal selection
This study included 72 dogs with diarrhea (Diarrhea Group) and 16 healthy dogs without any complaints (Control Group) which were brought either for diagnosis/treatment or vaccination/ routine check-up purposes between January 2021 and December 2021 to Konya Selcuk University and Şanlıurfa Harran University Animals hospitals of Veterinary Faculties. All dogs were owned at an age lower than six months, were unvaccinated, mixed breed, and were fed on commercial dry dog food. The owners reported that the dogs in the Diarrhea Group had diarrhea for less than 6 days and no treatment was given for this condition. The presence of active diarrhea less than 7 days and weighing 4-10 kg were accepted as inclusion criteria. Complete anorexia, dehydration >10%, respiratory, endocrine, renal or dermatological problems were exclusion criteria according to the previous reports for AD cases (2).

Blood sampling
Venous blood samples (4-6 ml) were obtained via vena cephalica venipuncture with minimal patient stress. After sampling, a portion of the collected blood samples was immediately transferred into tubes containing Na EDTA for CBC analysis. Another portion was transferred into tubes without anticoagulant for serum biochemistry analysis. The blood samples in the tubes without anticoagulant were centrifuged at 5000 rpm for 5 minutes at room temperature for serum extraction.

Forming subgroups
Fecal samples were taken with sterile swabs directly from the rectum to subdivide the Diarrhea Group on an etiological basis. Microscopic fecal examination (CX43 light microscope, Olympus®, Tokyo, Japan) was performed with zinc sulfate centrifugal flotation and centrifugal flotation with a solution of sodium nitrate methods. In addition, rapid diagnostic tests for Canine Parvovirus/Canine Coronavirus/Giardia spp. (CPV/CCV/Giardia Ag, Anigen Rapid®, Bionote, Gyeoggi-do, Korea). The sensitivity and specificity were determined as follows: for CPV subtypes (CPV2, 2a, 2b, 2c) - sensitivity: 100%, specificity: 98.8%; for CCV - sensitivity: 93.1%, specificity: 97.5%. The detection limit for Giardia was 125/100 μl. According to the microscopic fecal examination and rapid diagnostic test results, the Diarrhea Group was divided into Isospora (n=18), Parvoviral Enteritis (n=18), and Toxocara (n=18) groups. Dogs with no parasites/parasite eggs in the microscopic fecal examination, negative rapid diagnostic test results, mild leukocytosis, and the dietary change recorded by anamnestic data were included in the Dietary Diarrhea (n=18) group. The same tests and examinations were also applied to the dogs of the Control Group and they were all determined to be negative and/or within reference ranges. In addition, no recent diet change was confirmed by anamnesis.

Statistical analysis
Data analysis was performed using statistical software (SPSS 25.00, IBM®). In order to determine whether the variables had normal distributions, the one-sample Kolmogorov-Smirnov test was used. Parametric data were evaluated by Student t-test and presented as mean ± standard error of mean (SEM). The one-way analysis of variance (ANOVA) was used to determine whether there were significant differences between the groups. The statistical significance level was p<0.05. 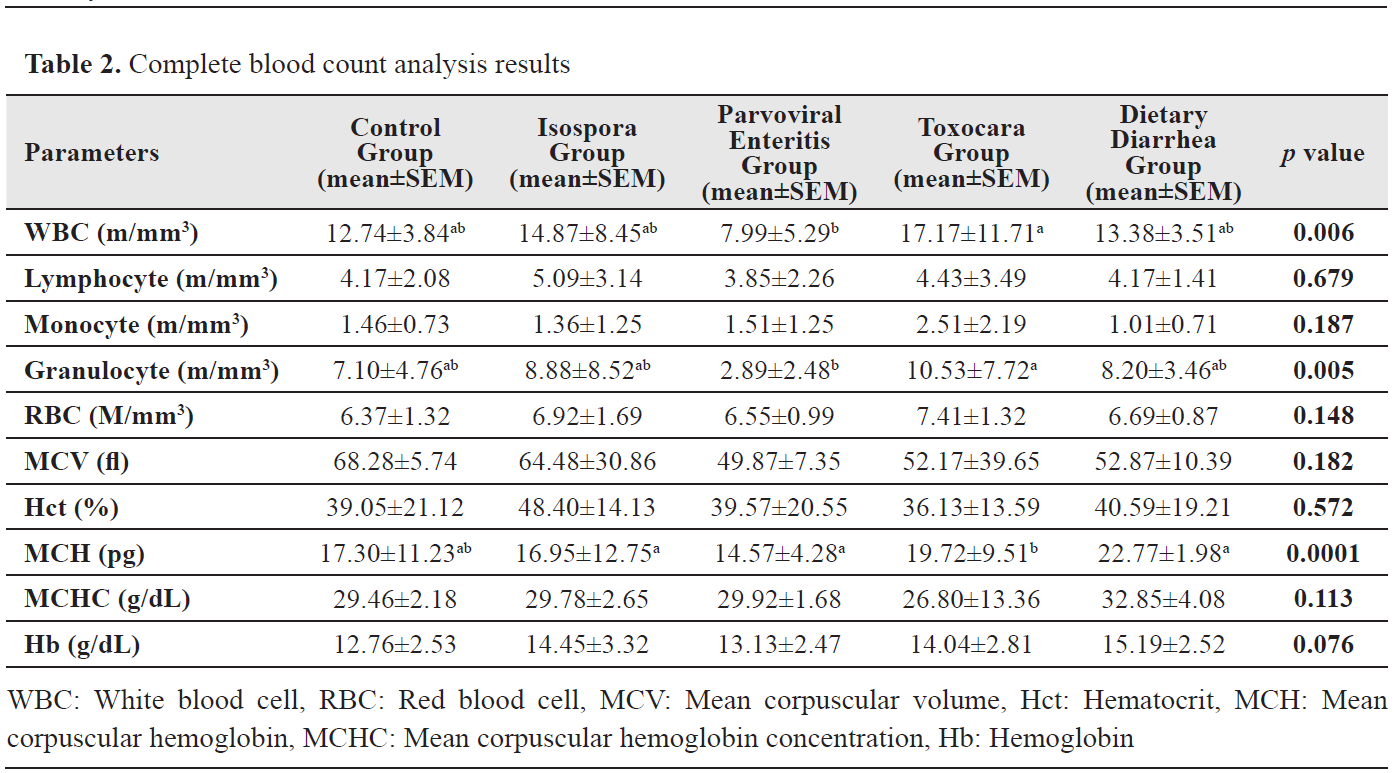 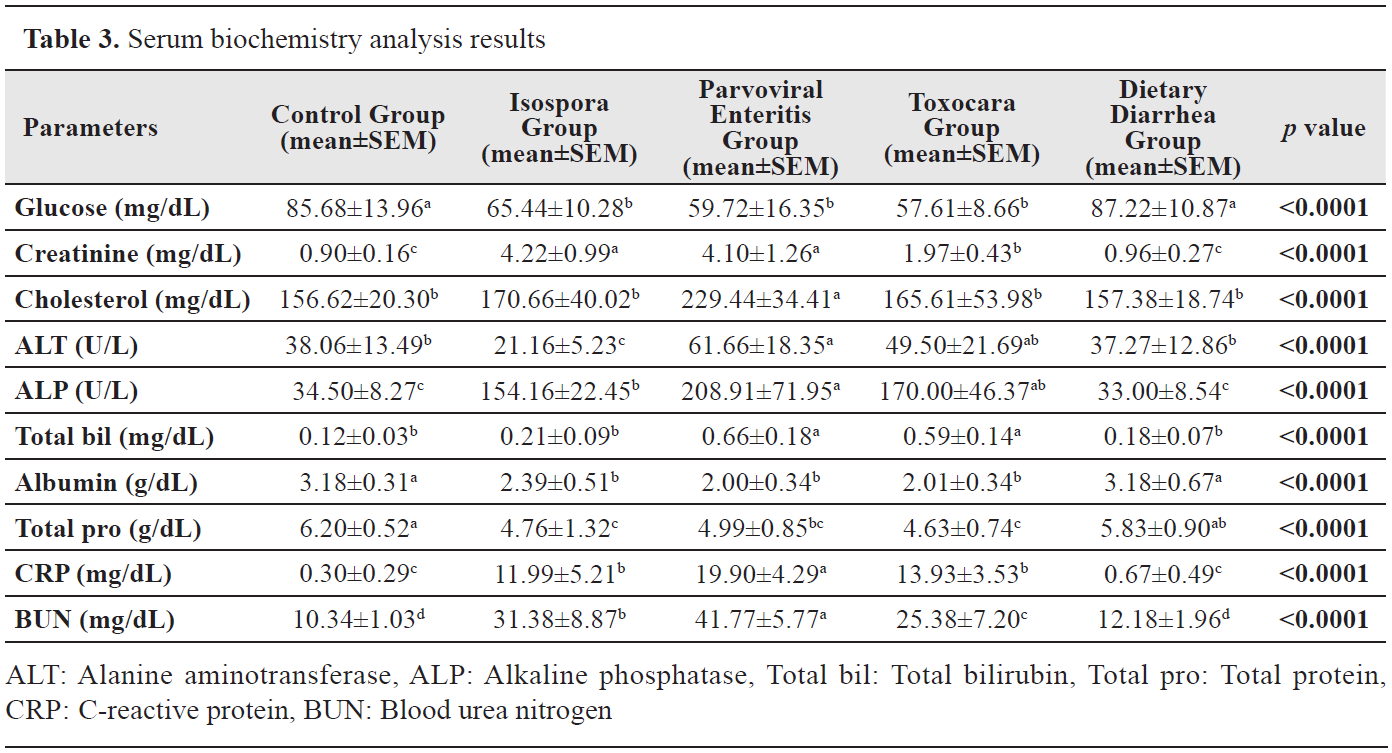 Diagnostic tests in dogs with AD are preferred according to the anamnesis, severity of clinical symptoms, and the dog’s clinical stability. Also, performing a microscopic fecal examination with an appropriate method is essential. Although CBC findings are generally normal except for marked eosinophilia in cases of parasitic infestations and leukopenia in cases of CPE, some serum biochemistry abnormalities have been reported in AD cases. These diagnostic tests are useful for forming a differential diagnosis list and demonstrating the damage hematologically. Also, these tests can help assess the possible target organ damage that dehydration may cause. As a result, it was observed that certain parameters related to inflammation, hypoperfusion, and organ damage were higher in CPE and lower in cases of diarrhea due to dietary changes. It was concluded that serum biochemistry parameters can provide more clinical information than CBC in terms of diagnostic differentiation in cases of AD due to different etiologies, especially in triage.

© 2022 Gülersoy E. This is an open-access article published under the terms of the Creative Commons Attribution License which permits unrestricted use, distribution, and reproduction in any medium, provided the original author and source are credited.