The development and implementation of new and safe means of treating subclinical mastitis (SM) in the production process remains a pressing problem. Our study aimed to investigate the therapeutic effect of the Bacillus megaterium NCH 55 strain on cow SM. All animals with signs of SM were fed with a basic diet with probiotic’s addition of 15 g/per day. The experiment was conveyed in 30 consecutive days. Milk and blood were collected on the 7th, 15th, and 30th day of the experiment. Daily milk yield was increased by 32.2% and somatic cell count was decreased from 290.00±32.12 to 96.80±39.03 ths/cm3. A decrease in inflammation was indicated by a decrease in POM370 (by 2.2 times) and POM430 (by 2.8 times). No significant changes in the blood serum indices of cows were observed. A probiotic’s positive effect has been established on the treatment of SM. The probiotic B. megaterium NСH 55 can be considered as an alternative to antibiotics and other chemotherapeutic drugs for treating SM in cows.

Mammary gland health is the main qualitative and quantitative indicator of cow’s udder secretion. Dairy cows are prone to various diseases, but mastitis is the most common (1). The latent infection is dangerous due to the absence of obvious symptoms and the lower level and quality of milk leads to significant economic losses (2). Several factors affect the condition of the udder. Microorganisms on the skin surface, milking equipment, and the environment may provoke mastitis (3, 4). The main mastitis-causing pathogens in cows are Staphylococcus aureus, Streptococcus agalactiae, and Escherichia coli (5).
There are limited data for evidence-based decisions for treatment and control. In the literature, there are some clinical biases and differing opinions. Antibiotics are a common practice for treating various forms of mastitis but render the milk unsuitable for further processing and human consumption (1). A huge amount of research is devoted on the development and effectiveness of natural antibacterial agents for treating udder disease (6).
Vary (7) notes that B. megaterium is found in diverse environments such as food, seawater, sediments, and even in bee honey, therefore, the substances produced by it are harmless to animals and humans.
Bacillary probiotic drugs capable of stimulating the immune system and producing antibacterial substances have been reported with promising results (8, 9, 10). Bacillus megaterium is of scientific and practical interest. It produces a bacteriocin, called megacin. It is a highly specific antimicrobial protein against the broader spectra of gram-negative bacteria, yeasts, fungi, and gram-positive species as well (11, 12).
Yao et al. (13) showed positive effects of Bacillus megaterium on growth performance, serum biochemical parameters, antioxidant capacity, and immune function in suckling calves.
Wang et al. (14) claimed that cows affected by subclinical mastitis (SM), had a relative abundance of opportunistic pathogens in the rumen, and the level of their metabolites could have an antibacterial or competitive inhibitory effect was increased.
Based on the fact that B. megaterium has broad antibacterial properties, we aimed to determine the effectiveness of Bacillus megaterium NCH 55 strain for treating SM in cows by determining the physicochemical composition of milk and biochemical parameters of blood serum during the treatment.


Animals
The research was conducted on a farm with a free-stall system. The milking was performed three times a day. The experiments were conducted on Holstein cows in the first lactation.
All animal experiments were in accordance with the ARRIVE recommendations (15), conducted in accordance with the UK Animal Act 1986 (Scientific Procedures), relevant guidelines, EU Directive 2010/63/EU on the protection of animals used for scientific purposes, and the Law of Ukraine “On the humane attitude to animals” № 692 from 2008. Animal handling procedures of the study were approved by the Local Ethics Committee of Sumy National Agrarian University (Approval no: 2021/01).
The California mastitis test was used to identify animals with SM (16). Cows (N=97) were tested in 2–3 lactations. Cows with signs of SM (I group, n=24) were selected as the experimental group. Clinically healthy cows (II group, n=12) were included in the control group.
All animals were fed the same diet according to their needs in energy with the addition of B. megaterium NСH 55 (1×109 CFU/g) – 15 g of probiotic powder/per day. The duration of the experiment was 30 days.
The researched probiotic strain was deposited by PE “Khronos Agro” (Ukraine) and proposed for commercial use in the form of spore powder – B. megaterium NСH 55. The powder was packed in 1 kg package.

Investigation of milk
Milk samples of 100 ml were collected in the morning from every quarter of the udder starting from the 7th day after calving (generally three times – on the 7th, 15th, and 30th day of the experiment). The samples were immediately transported to the laboratory.
The following parameters were determined in the milk samples: somatic cell count (SCC), protein, fat, lactose, fat-free dry milk residue (FFDMR), and protein oxidative modification (POM). These indicators were determined using Milk Analyzer 150 (Bentley Instruments Inc., Minnesota, USA). The method proposed by Reznick and Packer (17) was used to determine the POM.

Statistical analysis
The calculation of the experimental results was performed using the program Microsoft Excel for Windows 2010. The data obtained were statistically calculated using the Fisher-Student method, considering statistical errors and probabilities of more than 95% (p<0.05).

The values for the physicochemical composition of milk for both groups are presented in Table 1. Daily milk yield in the control group increased by 32.2% on day 30 almost as the value in the control group. On the 14th day of the experiment, the SCC in the milk of the I group decreased by 2.3 times, and on the 30th day by 3 times (p<0.05) and remained slightly higher than in clinically healthy animals of the I group. FFDMR content in the cow’s milk increased by 1.27 times. The milk quality indicators have increased, as well: protein – by 26.6%, fat – by 39.7%, lactose – by 15.2%, and have reached the values of the control group. 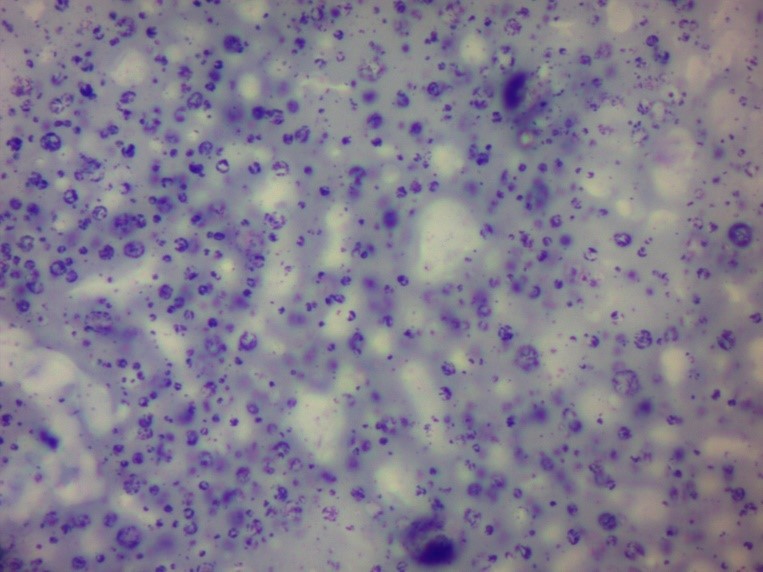 Figure 1. Milk smear at the beginning of the study (many somatic cells, including leukocytes; magnification: х400) 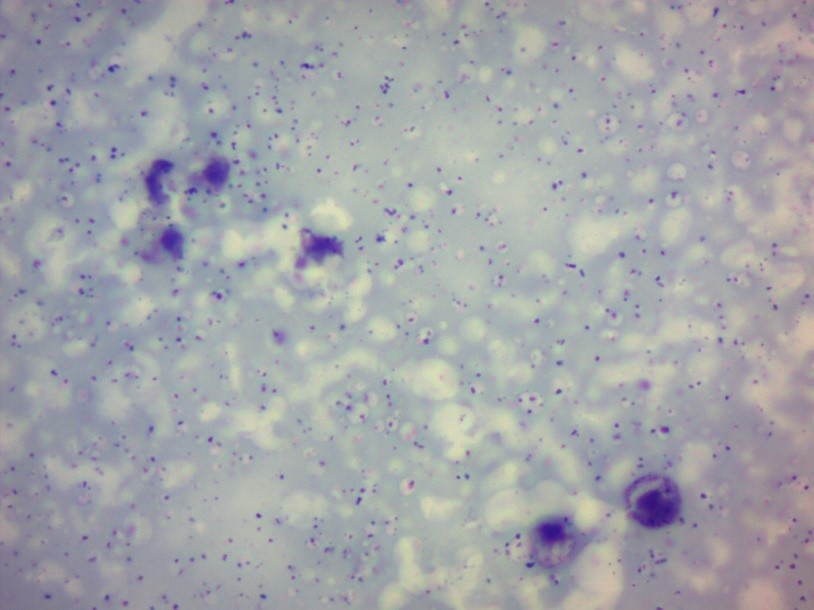 Figure 2. Milk sear at the end of the study (reduced number of somatic cells; magnification: х400)

In the I group, the total protein increased by 10.24 g/L and the globulin by 12.06 g/L on the 30th day reaching significantly higher values than the control. The albumin, AST, ALT, uric acid, and blood urea nitrogen concentrations were not significantly different compared to the control.

The development of antimicrobials as an alternative to antibiotics for use in dairy farming is a strategic direction in Ukraine and the European Union countries. The use of antibiotics for prophylactic purposes will be banned in the EU in 2022 (18). Mastitis remains the most expensive disease in dairy cows and antibiotic therapy during dry-off is an important part of mastitis eradication. Antimicrobial resistance which is a controversial global issue can be related to the application of a standard therapy regardless of the status of infection in dry cows and due to the difficulty of detecting the cows which require treatment (19).
А positive effect was achieved in the treatment of SM in cows without the use of antibiotics by introducing the probiotic B. megaterium NCH 55 into the diet. This effect was primarily expressed in an increase of the average daily milk yield by 32.2% on the 30th day of the experiment (20). Another indication of this effect was the decrease of SCC in the experimental group from 290.00±32.12 to 96.80±39.03 ths/cm3 which was similar to the control group. SCC increases in the milk of cows because of SM, so the control of this indicator is important in this disease. The SCC in the milk of healthy animals should not exceed 100 th/cm3 (21).
The restoration of the udder secretory function following the probiotic therapy was observed by the increased FFDMR of 27.4%, and increased protein and lactose in the milk samples. An increase in fat, protein, and lactose in milk is an indicator of recovery of udder function (22).
Equally important is the indicator of POM reduction in the experimental group. A stable decrease in POM370 from 15.10±1.34 to 6.80±1.16 nmol/mg protein and POM430 from 16.24±2.46 to 5.80±1.15 nmol/mg was observed. A decrease in this parameter directly indicates the reduction of oxidative processes in milk and a decrease in the inflammatory process in the tissues of the udder (23).
We noted changes in the biochemical composition of the blood serum of cows from the I group at the beginning and the end of the experiment. The level of total protein and globulin in the blood serum increased by 13.94% and 30.90% respectively. At the end of the experiment, these indicators were higher than in animals of the control group. This result may indicate an improvement in protein metabolism in animals of the experimental group after the use of probiotics. Other biochemical parameters, such as albumin, AST, ALT, uric acid, and blood urea nitrogen, were practically at the same level during the study period and did not differ from those in the control group.
According to the obtained results, it was confirmed that the addition of B. megaterium NCH 55 to the basic diet did not affect the level of metabolites in the blood of cows, which excludes the toxic effects of this probiotic on organs and tissues. The results of our study are consistent with those of Deng et al. (20) who declared no negative effect of B. megaterium 1259 on blood indicators.
Our indications coincide with other reports (8, 10, 13, 20) which concur that probiotic strains of B. megaterium can be used in animal husbandry. They do not pose a threat to human health by consuming products of animals that were fed by supplementing probiotics. This direction is of great scientific and practical interest (24). Further research into the use of the probiotic B. megaterium NCH 55 strain for treating mastitis will help broaden our understanding of its potential.

Summing up the results of the study, it can be concluded that the use of the probiotic B. megaterium NCH 55 strain had a positive effect on the treatment of SM in cows, which was manifested in an increase in the average daily milk yield, a decrease in the SCC, and an improvement in the quality indicators of milk. Moreover, the treatment was physiologically compliant because the animal organism was not subjected to drug burden and was economically viable due to the relatively low cost of the drug and the possibility of using milk for further processing.

Authors of the manuscript are grateful to the PE “Khronos Agro” (Ukraine) represented by its director Ilya Martynyuk for the deposited strains of B. megaterium NCH 55 provided for research.

© 2022 Shkromada O. This is an open-access article published under the terms of the Creative Commons Attribution License which permits unrestricted use, distribution, and reproduction in any medium, provided the original author and source are credited.