Lesser mole-rats (Nannospalax leucodon) are members of the Rodentia order’s Spalacidae family, and they are found in Northeastern Africa, the Balkans, Southeastern Europe, Central Asia, the Middle East, and Caucasia. The shape of the skull has a significant impact on the phenotypic appearance of animal heads, and although many domestic species have been studied, there is a lack of evidence on the macro-anatomical characteristics of the skeletal system in mole-rats. The current research was focused on the morphological, morphometric, and radiographic properties of lesser mole-rats skull in Bosnia and Herzegovina. The research was conducted on five lesser mole-rats from Bjelasnica Mountain, Bosnia and Herzegovina. We compared the results of the previously published studies, and we found a lot of similarities between Nannospalax leucodon in Bosnia and Herzegovina and Nannospalax ehrenbergi in North Iraq, as well as the Nannospalax nehringi from Eastern Anatolia.

Mole-rats are members of the Rodentia order’s Spalacidae family. They are rodents who live underground in their tunnel system, spending their entire lives underground, only occasionally surfacing above the ground. Their eyes are completely rudimentary and degenerated – which means that they are blind and do not have the ability to respond to visual images (1). Northeastern Africa, the Balkans, Southeastern Europe, Central Asia, the Middle East, and Caucasia are among the family’s distribution areas (2). They are primarily phytophagous animals that live in steppes and gardens by burrowing with their extremities (3). The shape of their skull has a significant impact on the phenotypic appearance of animal heads, and even though many domestic species have beenstudied, there is a lack of evidence on the macroanatomical characteristics of the skeletal system in mole-rats. Their taxonomy, which includes chromosomal and molecular-genetic information as well as anatomy, physiology, and behaviour needs to be updated. There have been several morphological and karyological studies on these species, but most of them were conducted in Turkey  (3, 4, 5), and there is a lack of information about these species in Bosnia and Herzegovina. Kankılıç et al. (3) carried out comprehensive karyological studies on Nannospalax leucodon from Turkey on their cranium bones, but without their detailed description. Furthermore, Özkan (6) described the cranium bones, as well as the axial skeleton, but failed to provide photography labeling. Also, when compared to other similar rodent species, the skull of lesser mole-rats shows some different morphological characteristics that were not described before in other Nannospalax species.
The authors of this research focused on the morphological, morphometric, and radiographic properties of the skull, aimed at contributing to a better understanding of this field to provide information for future research on this or similar species.

Five adult (two male and three female) lesser mole-rats (Nannospalax leucodon), found on Bjelasnica mountain, were used to examine their cranial skeletons. All the animals collected were deceased, thus no ethical approval for this research was required. The bones were freed from muscles, fascia, and other structures through a maceration process. Subsequently, fat was removed and the bones were bleached until they were spotless. For morphometric analysis of neurocranium and splanchnocranium, a digital caliper was used, according to the criteria reported by Nevo et al. (7). We examined dorsal, ventral, and lateral aspects of the cranium, as well as the external aspect of the mandible. In the morphometric analysis of the skull, thirteen metric parameters were determined, and the mean value and standard deviation were calculated for each parameter. The morphological analysis was performed on the following bones: occipital, temporal, inter-parietal, parietal, nasal, jugal, basioccipital, pterygoid, squamosal, maxillary, incisive, nasal bone, and mandible with its processes. For Latin terminology, we used Nomina Anatomica Veterinaria, sixth edition, 2017 (8). 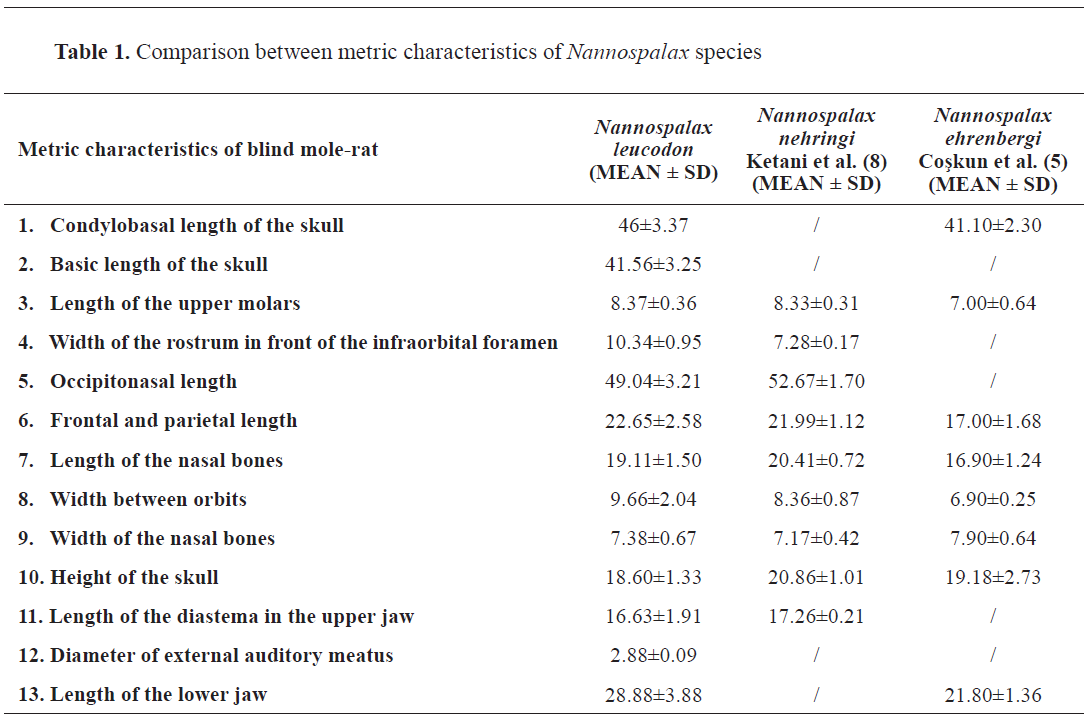 Craniometric characteristics are shown on Fig. 1 and Fig. 2. 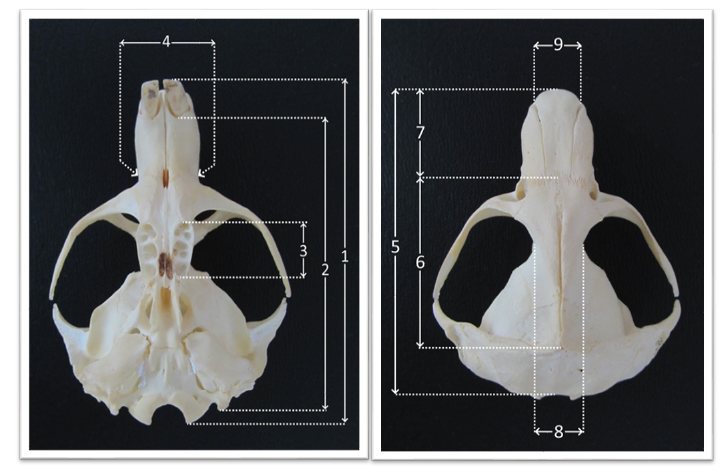 Figure 2. 10. Height of the skull; 11. Length of diastema in the upper jaw; 12. Diameter of external auditory meatus; 13. Length of the lower jaw

On the occipital bone (Fig. 3), above both sides of the occipital condyles, all five individuals had a very small foramen supracondyloideum, which transmits hypoglossal nerve. The ventral surface of the basilar part of the occipital bone was rounded. Paracondylar processes were short, sharp, ventrally and caudally directed. The sagittal crest was prominent and sharp, triangle-shaped. The basilar part was small, non-prominent, except for the connection between the two occipital condyles. Foramen magnum was large. The external occipital crest was well-observed in Nannospalax leucodon. The nuchal crest was located above the cranium and it continued into the external sagittal crest, being prominent in both female and male animals. The rostral part of the occipital bones was incorporated into squamosal bone, and they looked like V-shaped protuberances on both sides (Fig. 4). 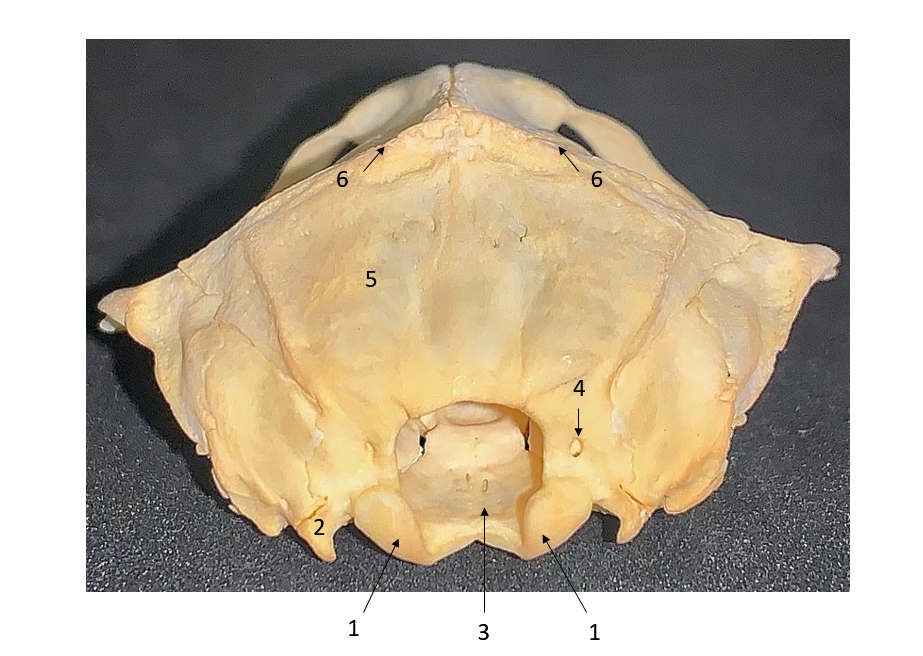 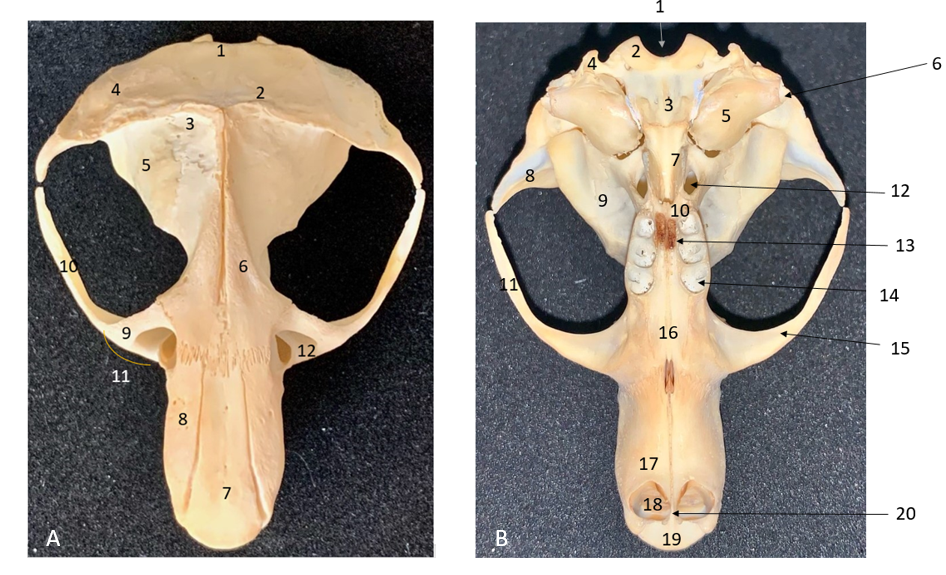 Interparietal bones were small, disc-shaped and they were found between the lambdoid crest, external sagittal crest, and parietal bones. Parietal bones formed the roof of the skull. Medially, they were connected with intra-parietal bones, and rostrally with frontal bones. They extended along the line where frontal bones meet. Supraorbital foramens were not found. Zygomatic processes of temporal bone were present, sharp, and in rostromedial direction. Frontal bones were prominent, located between the maxilla laterally, and rostrally connected with nasal bone and premaxilla. Infraorbital openings were located between jugal bone and they were oval rather than circular, while the lumen was wider dorsally and constricted ventrally.
On the ventral aspect, the following structures were found: basioccipital bone, external auditory openings, pterygoid bone, palatine bone, tympanic bulla, orbit, parapterygoid fossa, molar teeth alveoli, maxillary bone, incisive bone, and two strong incisive teeth.
The basioccipital bone was situated rostrally to the condyles, and it had three prominent processes, one on the median plane and two laterally. The external auditory opening was large, and the tympanic bulla was well developed. The orbit had a huge, oval form, ventrally tightened. There were three molar teeth. The incisive bone (premaxilla) was a wide plate that was bent forward to form a deep, wide groove. The rostromedial side bilaterally showed a specific gnathic process, just between the two incisors. This was also visible on the skull radiograph (Fig. 5). On the incisive bone, as well as on the nasal bone, nutrient openings were seen. The incisive bone articulated with the nasal bone anteriorly. The roof of the nasal cavity was formed by the nasal bone and two incisive bones. The anterior part of the nasal bone was convex and oval. 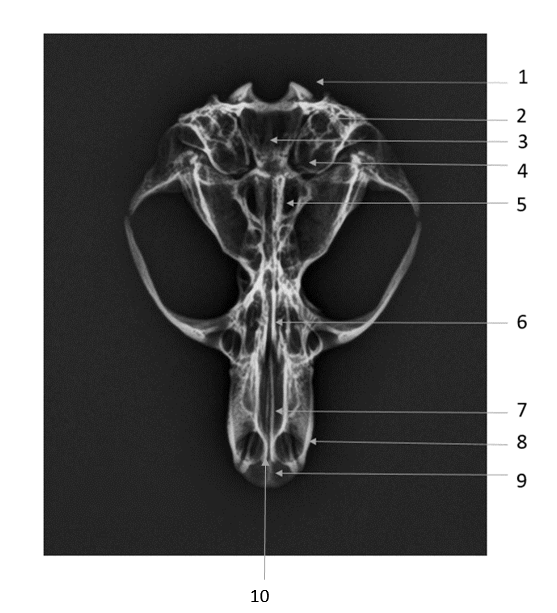 Fossa masseterica was concave. On the caudal edge of the mandibular ramus, at the mandibular body’s border, an angular process extending upwards and externally was observed. Other observed processes were alveolar, condylar, and coronoid. The coronoid process had a sharpened point. There were dental alveoli for molars on each side of the mandible (Fig. 6). The three molar teeth were placed together behind a large diastema, a toothless space between the incisor and the first molar. The septum entirely separated the alveoli of all molar teeth. In lower incisors, longitudinal ridges were seen. Radiograph of the lateral skull view and mandible showed a very deep alveolar socket of incisors (Fig. 7). 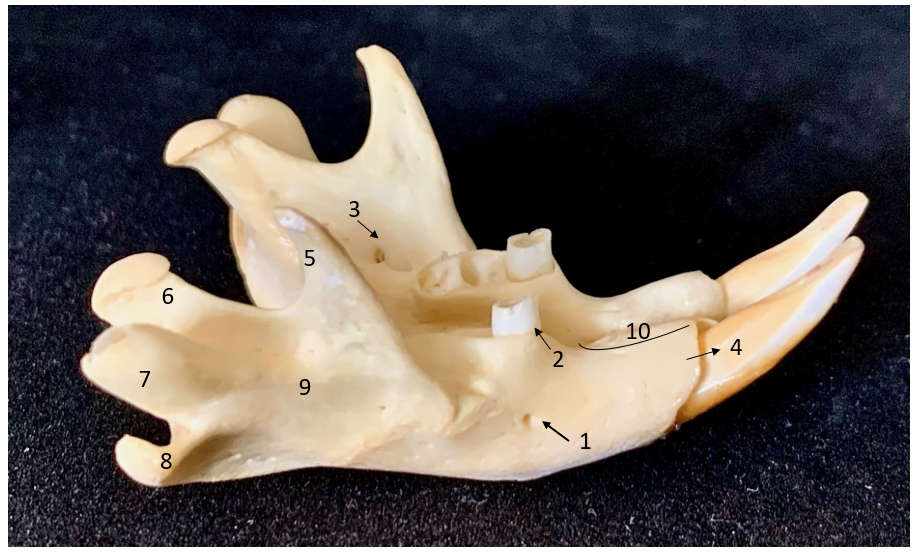 There is a taxonomic debate on the Spalacidae because of their morphological similarities, thus skull and molar morphometric analyses are very important factors in rodent taxonomy distinction (9).
According to Nowak (10), these two Spalacidae species, Spalax and Nannospalax, are separated from one another by the absence of a foramen on the occipital condyle in the skull.
Yağcı and Gurbanov (9) also found that the best way to taxonomically differentiate spalacids is to perform morphometric analysis of skulls and molars, which is widely used. Rather than focusing on the shape differences, the authors focused on the morphometric differences of the skull bones.
Also, it is interesting to note that ecological factors may affect dorsal shape variations. Young and adult individuals sampled from hard soils revealed that they have flattening of the sagittal crest, which may suggest the adaptation of the skull due to the higher pressure. In our study, we have not observed this flattening of the sagittal crest because the specimens were found in soft soil on the Bjelasnica Mountain, so there was no need for skull adaptation in this respect (9).
We compared the results of the previously published studies and found many similarities between Nannospalax leucodon in Bosnia and Herzegovina, Nannospalax ehrenbergi in North Iraq (2), and Nannospalax nehringi (3, 4) from Eastern Anatolia.
Also, we found similarities with the skull morphology of the Brazilian shrew mouse Blarinomys breviceps (11), which helped us to identify and recognize bones that have not been identified in Nannospalax species yet. Still, this should be taken with caution, because they belong to two different families of the superfamily Muroidea (Spalacidae and Cricetidae, respectively). Nevertheless, many bones of Blarinomys breviceps and Nannospalax leucodon are very similar, including the presence of gnathic process as well as jugal bone, which are not previously described in Nannospalax species.
Due to the morphometric properties of the skull, we made a comparison among the Nannospalax leucodon we found on Bjelasnica Mountain, the Nannospalax nehringi found in Eastern Anatolia, and the Nannospalax ehrenbergi found in North Iraq. Craniometrics of Nannospalax leucodon and Nannospalax nehringi were similar, while craniometrics of Nannospalax ehrenbergi were much smaller when compared to the other two species (Table 1).
According to Ketani et al. (12), who conducted a macro-anatomical investigation of skull bones in Nannospalax nehringi, external occipital crest in N. nehringi is seen in male animals, while in female animals it is not prominent, and this is also well-observed in Nannospalax leucodon. While the shape components of the mandible do reveal some variations between the sexes, the size of the animal is the most important component of sexual dimorphism (13). Tympanic bulla is well-developed in all the above-mentioned species. The lumen ofthe intraorbital foramen of Nannospalax leucodon is wider dorsally and constricted ventrally. Although Ketani et al. (12) wrote that the angular process on the ramus mandibula is only seen in Nannospalax nehringi and has not been reported in any other rodent species, we observed that Nannospalax leucodon has this process as well, and it is very noticeable. However, it has to be pointed out that the angular process is present in all rodents, not only in Spalacidae (14). Another process that is not observed in all rodents, but only in some spalacids, is the alveolar process which is not only noticeable but prominent in Nannospalax leucodon. The Palestinian blind mole-rat (Nannospalax ehrenbergi) could be distinguished from the greater blind mole-rat (Nannospalax microphthalmus) and the lesser mole-rat (Nannospalax leucodon) by the height of the alveolar process, which did not reach the height of the condylar process of the mandibula (5). Coşkun et al. (2) found that the molars of North-Iraqi Nannospalax have three roots on all specimens, but roots of M3 are welded in older specimens; this was also observed in Nannospalax leucodon of our study. Also, the gnathic process has not been previously described in blind molerats, and this is the first paper that described and labeled it.

The craniometrics of Nannospalax leucodon from Bosnia and Herzegovina and Nannospalax nehringi from Eastern Anatolia had high a similarity. The Nannospalax ehrenbergi specimen from North Iraq had small similarities with these two species. The craniometric, macro-anatomical, and radiograph characteristics of the studied specimens can be used for species identification and anatomic description.

We want to thank Department of Radiology on Veterinary Faculty, who helped us on radiographic imaging, and Amila Dautbasic, the English language professor for proof reading the manuscript and English correction.

AR and PB wrote and prepared the manuscript text. AR labeled and described anatomical structures. NH did the morphometrical analysis and provided material together with speleologist JM.

© 2022 Rizvanovic A. This is an open-access article published under the terms of the Creative Commons Attribution License which permits unrestricted use, distribution, and reproduction in any medium, provided the original author and source are credited.