The health condition of the mammary gland is highly crucial for obtaining good quality colostrum. The lactoferrin (LF), as an iron-binding protein, plays a key role in the defense mechanisms of the mammary gland due to its’ bacteriostatic properties. The study aimed to investigate the factors affecting the LF concentration in the bovine colostrum milk during the postpartum period, and the effect of somatic cell count (SCC) on the LF concentration and milk composition. The cows were randomly selected at a dairy farm in Pelagonia region. Colostrum samples from 12 cows were collected. Samples were taken at different time intervals after parturition, 1, 6, 12, 24, 48, 72, 96, and 120 h after parturition. Cows in their second parity were found to have higher levels of LF compared to cows in the third and higher parity (p>0.05). Time had a significant effect on the LF concentration (p<0.01), with the highest value recorded 1 h after parturition remaining stable for one hour. LF concentration and SCC in the colostrum showed a weak positive correlation (r=0.40; p<0.01). The highest LF concentration was noticed when SCC was above 800,000 cells/mL. In conclusion, the colostrum LF concentration was significantly affected by the interactions of the two factors, i.e., time after parturition and SCC (p<0.05). Milk composition was affected by elevated SCC. Parity showed no association with LF. The SCC can be used as a reliable means of assessing colostrum quality.

The colostrum is a thick, yellowish-white fluid secretion from the mammary gland during the first 24 hours after calving (1), and it is an important source of nutritive, growth, and antimicrobial factors for the newborn calf (2). Numerous factors have been suggested to influence the colostrum quality. Immunoglobulins are known to be one of the many components of the colostrum important for the calf’s development. Therefore, the colostrum of a good quality contains a high level of immunoglobulins. Other non-nutrient factors such as leukocytes, hormones, growth factors, oligosaccharides, micro RNAs, as well as lactoferrin, have significant effects on the development and maturation of intestinal and systemic immune functions (3, 4). The first few weeks of life are the most important for the calf’s health. This period is characterized by a high mortality rate, poor environmental hygiene, and digestive disorders (5). For all these reasons, the colostrum’s quality is one of the most important factors in preventing morbidity and mortality in calves (3).
The concentration of the lactoferrin (LF) in the bovine colostrum (as an iron-binding glycoprotein) is significantly lower (820 μg/mL) compared with human colostrum (10,580 μg/mL) (6), with individual variations ranging from 100 to 2,200 μg/mL (7). It is well documented that iron is not only an essential nutrient for the growth of the calves but it is also an essential nutrient for many different kinds of bacteria (8). LF is one of the several iron-carrying proteins which have a transport and preserving role for the iron. However, free iron in the body may promote production of free radicals, which can result in tissue damage. Bacterial growth can be impaired by limiting the free iron concentration (8), i.e., higher LF concentration is correlated with a longer lag phase (9).
The composition and physical characteristics of colostrum depends on many factors such as age, parity, breed, diet, vaccination status, and history of diseases (10, 11). Rocha et al. have concluded that parity is an important factor in relation with LF concentration (11). The concentration of the LF in colostrum milk in highly lactating cows is four times higher (2,000 μg/mL) than in the fattening breeds (500 μg/mL) (12, 13). According to Tsuji et al. (13), the highest concentrations of LF were obtained in the Holstein Frisian cows (1,960 μg/mL) and Jersey (2,110 μg/mL), while the milk of other breeds, Japanese black and Japanese gray contained significantly lower concentrations of LF (560 μg/mL and 400 μg/mL, respectively). Having in mind the above, the aim of this study was to investigate the factors affecting the LF concentration in the bovine colostrum milk during postpartum period.

Animals
Colostrum was obtained within five days postpartum from the Holstein-Friesian cows (n=12), which were randomly chosen from a dairy farm in the Pelagonia region, North Macedonia during the summer season. Before each sampling, clinical status of the cow, udder, the time of parturition, and sampling were recorded. All the cows were housed under the same conditions in a tie stall barns. All cows were provided with a total mixed ration (TRM) drug-free diet and water ad libitum. The cows were milked twice daily with pipeline milking system. The average milk production was 7,500 liters of milk for 305 days of lactation.

Milk samples
Duplicate milk samples from each cow were collected on the sampling day. Each sample set (50 mL) was analyzed for its composition (milk fat, protein, lactose, solids non-fat - SNF) and somatic cell count (SCC). Another set of milk samples (30 mL) were used for the determination of LF concentration. Samples were taken at different hours after parturition till fifth day postpartum. At day one of the postpartum, five colostrum samples were collected (after parturition, 1, 6, 12, and 24 hours after parturition). The rest of the samples were taken at 48 hours (2nd day), 72 h (3rd day), 96 h (4th day), and 120 h (5th day) postpartum.

Methods
Milk composition was determined with Lactoscope C4+ (Delta Instruments B.V, Drachten, the Netherlands), according to ISO 9622: 1999 standard (14). SCC was performed by flow cytometry with Somacount CC 150 (Bentley Instruments, Inc., Chaska, Minnesota, U.S.A.). Milk-enumeration of SCC was in accordance with the MK EN ISO 13366- 2:2010 standard (15). The quantitative determination of LF was made by the ELISA method with commercial immunoenzyme test Bovine Lactoferrin ELISA kit (Biopanda Reagents, Belfast, The United Kingdom), aspreviously reported (16, 17). Milk samples were previously skimmed by centrifugation on 2-8 °С at 3000 rpm in period of 20 minutes (MPW – 352 R). The plates were read on wavelength λ=450 nm by using Microplate reader Model 680 (BioRad, Hercules, California, U.S.A.). All procedures were performed according to manufacturer’s instructions. The dilution factor of the samples was 1,000. The ELISA method was validated prior the analysis. The performance characteristics in the validation study included linearity, sensitivity, and precision of the method.
The sensitivity of the method was assessed through the limit of detection (LOD). The LOD was determined with analysis of 20 blank samples (diluent buffer). The LOD was calculated as the mean signal of the blank samples plus 3 times of the standard deviation (SD). The LOD was 11.5 ng/mL. The precision of the method was determined as intraassay precision and inter-assay precision. Precision was expressed as the CV (Coefficient of variation), %. Intra-assay precision shows the reproducibility between wells within ELISA kit, while inter-assay precision shows the reproducibility between ELISA kits done on different days. Intra-assay precision was evaluated by testing three samples in the same kit. Each sample was tested in 18 replicates.
Inter-assay precision was evaluated by testing three samples in four separate ELISA kits, from the same manufacturer. Each sample was tested in 6 replicates per kits. The CV was from 3.98 to 4.95%.

Statistical analysis
The milk samples were classified on the basis of parity (second parity - L2, - third parity - L3, and forth, and above parity - L4+). Also, samples were classified on the basis of somatic cells (SCC-1 - up to 400,000 cells/mL, SCC-2 - from 400,001 to 800,000 cells/mL, and SCC-3- above 800,001 cells/mL). The statistical software SPSS 15.0 for Windows (Chicago, SPSS Inc.) was used for the statistical analysis. The results are presented as mean values and standard error of mean (mean ± SEM). The significance of differences in the milk LF concentration among groups was analyzed by the one-way ANOVA. Moreover, a factorial ANOVA was conducted with p<0.05 considered significant and those p<0.01 and p<0.001 considered highly significant. The correlation coefficients among groups were analyzed by the Spearman’s correlation coefficient. 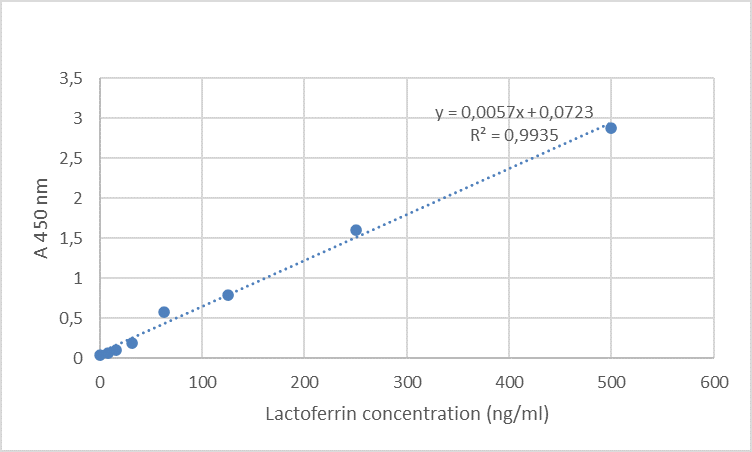 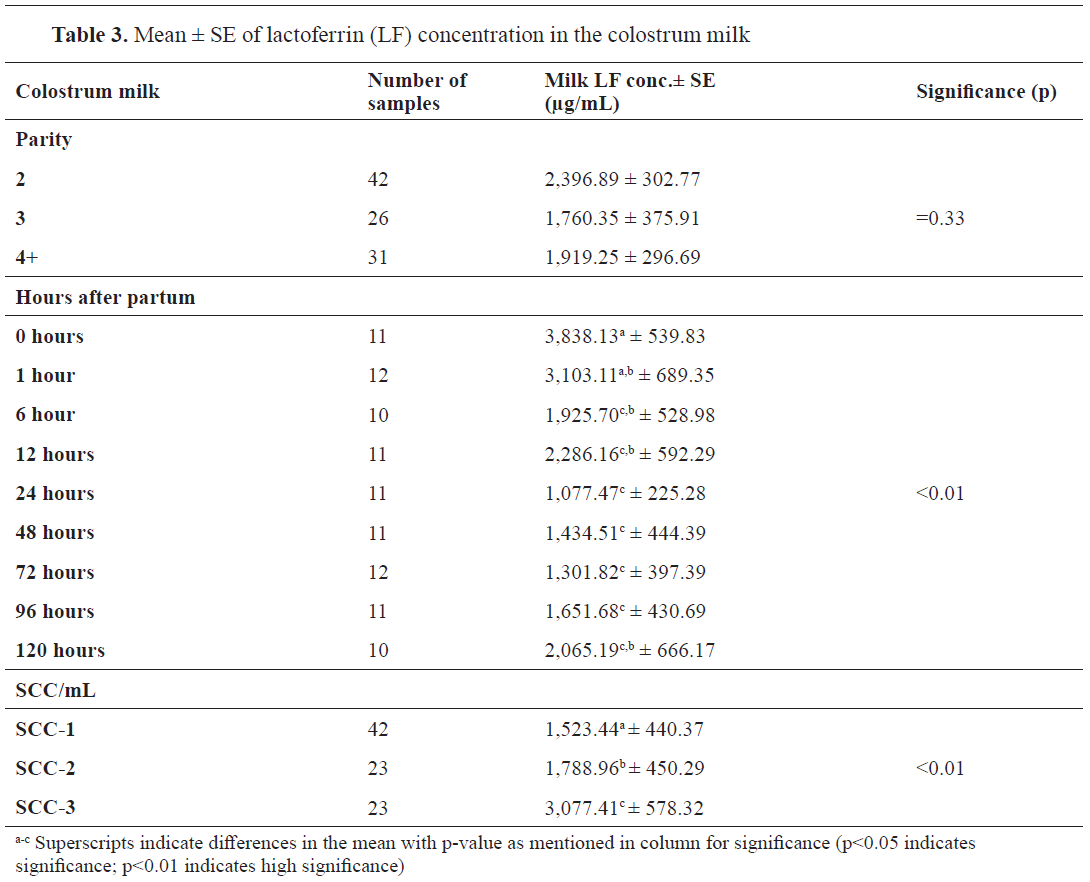 The distribution of the milk LF concentration in the colostrum samples is presented in Fig. 2. 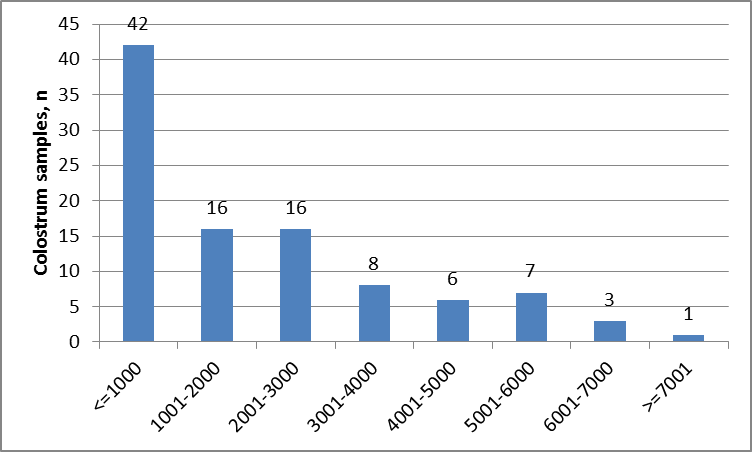 In addition, significant differences (p<0.05) were noticed comparing colostrum among all three groups of SCC. The protein concentration was found to be 25.87% in the first milking colostrum in group SCC-1, 20.98% in the samples in group SCC-2, and 20.01% in the SCC-3 samples (p<0.05). On the other hand, milk fat varied during the time of sampling with significant difference between SCC-1 and SCC-2 (p<0.05). SCCs showed fluctuations between groups which were significantly different. The LF concentration was observed to be high postpartum in all three groups except in SCC-1 which remained stable at 120 h postpartum and was significantly different compared to the other two groups. In SCC-2 and SCC-3, the concentration of LF was increased to 2,567.46 μg/mL and 5,612.49 μg/mL, respectively. This increment in the LF concentration was accompanied by an increase in the SCC in group SCC-3 (Table 5). 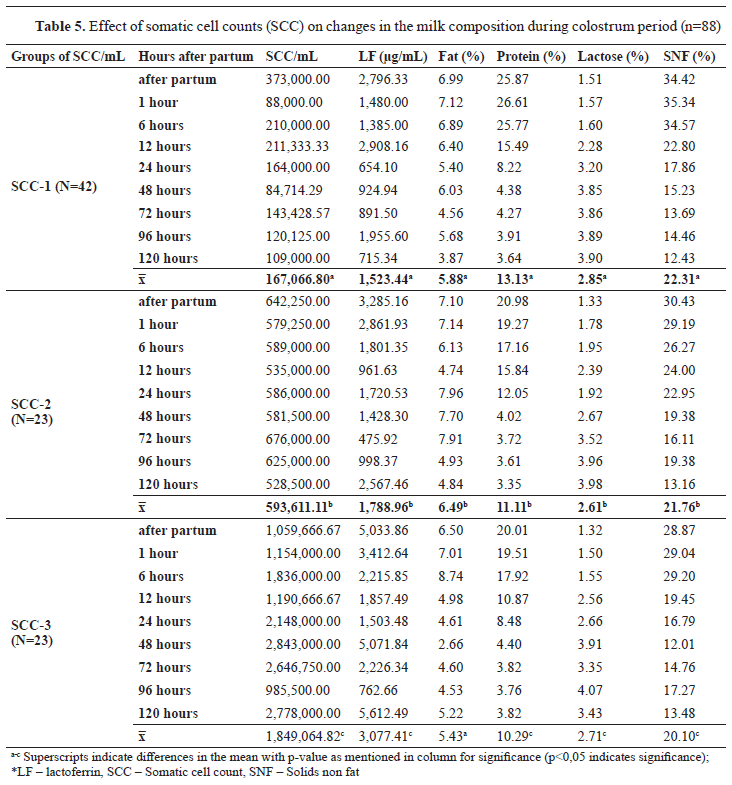 The LF concentration in the colostrum depended on the time after parturition and the SCC, whereas, parity showed no association. The highest value was recorded in the first milking colostrum remaining stable until one hour after parturition. The LF concentration in the milk had a positive correlation with the SCC. The high SCC affected the milk protein, lactose, solids non-fat, and fat composition. Therefore, it can be concluded that SCC can be used as an indicator of the colostrum quality.

The authors would like to express their gratitude to all involved people from the farms in the Pelagonia region.

© 2022 Trajkovska B. This is an open-access article published under the terms of the Creative Commons Attribution License which permits unrestricted use, distribution, and reproduction in any medium, provided the original author and source are credited.