INTRODUCTION
Ketoprofen belongs to the non-steroidal antiinflammatory drugs (NSAIDs) which have antiinflammatory, analgesic, and antipyretic properties by inhibiting both types of cyclooxygenase enzymes. The cyclooxygenase converts arachidonic acid to prostaglandin, which is a chemical mediator acting to produce pain, inflammation, and fever (1, 2, 3, 4). The use of ketoprofen alone without combination with other drugs was reported to  alleviate inflammation, pain, and fever (5). Ketoprofen is a protein-bound drug (more than 99%) (6, 7) that can have drug-todrug interaction by affecting the pharmacodynamic and pharmacokinetic properties, thus altering the therapeutic efficacy and toxicity of the medication. Xylazine has analgesic, sedative, and muscle relaxant properties by stimulating alpha-2 adrenergic receptors resulting in decreased secretion of catecholamines and depression of the nervous tissue (8, 9). These effects may be beneficial when xylazine is combined with other drugs such as ketoprofen. The study aimed to assess the effect of ketoprofen or ketoprofen/xylazine treatment on the pharmacodynamic (cyclooxygenase-2 level) and pharmacokinetic properties of ketoprofen (absorption, distribution, metabolism, and elimination) in mice.

MATERIAL AND METHODS
Laboratory animals and drugs preparation Albino Swiss mice of both sex weighing between 20-33 g were placed under a light regime of 10-hour light and 14-hour dark cycles at 20 °C. The food and  water were allowed ad libitum. Ketoprofen (10%, NITA-FARM LLC, Russia) and  xylazine (2%, Interchemie, Netherlands) were diluted in normal saline up to the desired dose which was applied intraperitoneally (i.p.) to the  mice.

Laboratory animal ethics
The research was approved by the Animal care and use committee at the College of Veterinary Medicine/University of Mosul (approval number UM.VET.2021.064).
Assessment of the analgesic Median Effective. Doses (ED50s) of ketoprofen and xylazine in mice
The analgesic ED50 of ketoprofen or xylazine was assessed by the up-and-down method (10, 11, 12, 13, 14). Pain was elicited by using of hot  plate apparatus (Panlab, Spain). The hot plate apparatus was heated at 56 °C. Each mouse was positioned separately on the hot plate surface  and the time of pain response was measured in seconds. Pain was acknowledged by recording hind paw dragging, licking, and jumping behavior (pre-injection). The treatment included ketoprofen or xylazine treatment (with the first dose of 4 and 10 mg/kg, i.p. respectively). Following 30 minutes after the treatment, the hot plate pain eliciting procedure was repeated recording the time of pain response (postinjection). The analgesic effect of the treatment was acknowledged if the post-injection pain response time was greater than the pre-injection time. The mice were permitted to stay on the hot plate surface for a maximum time of 20 seconds to prevent tissue damage to the paws (15, 16, 17).
Inhibition of cyclooxygenase-2 concentration in mice by ketoprofen: effect of xylazine administration
The test included three groups of mice (n=5, N=15). The control group was injected with normal saline by i.p. route. The ketoprofen group was treated with ketoprofen 2.52 mg/kg, i.p. The combined treatment group was given ketoprofen and xylazine 2.52 and 13.26 mg/kg, i.p., respectively. After 30 minutes, blood samples were collected to obtain serum. Enzyme-linked immunosorbent assay (ELISA) through an ELISA kit (with catalog number MBS269104, USA) was used to analyze the concentration of cyclooxygenase-2 in ng/ml. The absorbance was measured at 450 nm in cyclooxygenase-2 standards of 0.156, 0.312, 0.625, 1.25, 2.5, 5, and 10 ng/ml. The standards calibration curve was then applied to get the simple linear regression (y=0.018 + 0.1202 x with correlation coefficient R²=0.998) (Fig. 1) used for calibration of the cyclooxygenase-2 concentration in the serum samples of mice.
The concentration of cyclooxygenase-2 in the serum was estimated through incubation of the serum at 37 °C for 90 minutes followed by washing and adding of biotinylated antibody solution, and another incubation for 60 minutes at 37 °C. The operating samples were washed and incubated with the enzyme at 37 °C for up to 30 minutes. Following another washing, the color reagent was added and incubated at 37 °C for 30 min. As a final step, the color reagent C was added, and the absorbance was measured by using a micro-plate reader for 10 minutes at 450 nm (18, 19, 20).

Detecting the plasma concentration of ketoprofen: influence of xylazine administration in mice
The first group of mice was injected with ketoprofen 2.52 mg/kg, i.p. while the second group was treated with ketoprofen and xylazine 2.52 and
13.26 mg/kg, i.p., respectively. Plasma ketoprofen concentration was measured in blood samples from the ketoprofen and ketoprofen/xylazine treatment group at 0.25, 0.5, 1, 2, 4, and 24 h. Blood plasma was obtained by centrifugation (3000 rpm for 15 minutes, Chalice, UK) of heparinized blood (heparin 1:10 ratio, Braun Medical Inc, USA). The plasma samples were kept at -18 °C until assessment for up to 3 days, performed by high-performance liquid chromatography (HPLC, Shimadzu, Japan) apparatus containing an ultraviolet detector unit (21).
Preparing multiple ketoprofen standards
The ketoprofen standards were made in 5, 10, 20, 40, 80, and 160 μg/ml concentrations by diluting ketoprofen with mobile phase (methanol:water 70:30 volume/volume) and adjusting pH at 3.3 by using phosphoric acid. The solution was filtered with degassing using a 0.45 μm filter paper (Millipore, England) (21). Finally, the clear solution was injected in a 20 μl volume and examined by using HPLC at a wavelength of 260 nm with a flow rate of 1 ml/min and a run time fixed for 5 min.
The simple linear regression equation (y=a+bx) was estimated from the ketoprofen standards (R2=0.9894) used for the calculation of ketoprofen concentration in the plasma samples for the two groups (Fig. 2), where ‘y’ equals the peak area of the samples detected at 260 nm on the HPLC, ‘a’ was the intercept (183370), ‘b’ was the slope (42535), and ‘x’ was the ketoprofen concentration of unknown plasma samples.
Liquid-liquid extraction
The liquid-liquid extraction was applied by using a simple, approved, and accurate technique for ketoprofen extraction from the plasma proteins (21). The technique consisted of liquid-liquid extraction by adding acetonitrile to the plasma sample at 1:1 volume/volume. Thereafter, the mixture was vortexed for up to 10 minutes and centrifuged (3000 rpm for 10 min.). The resulting supernatant was filtered with degassing using a 0.45 μm filter paper. The sample was injected (20 μl) and analyzed on HPLC (combined with a UVchromatographic detector) at 260 nm with the same chromatographic conditions described previously.

Statistics
The statistical analysis of parametric data was performed by one-way analysis of variance for multiple mean comparison. The means of the two groups of mice were analyzed by the unpaired student T-test (23). The significance level was p<0.05.

RESULTS
Analgesic ED50s for ketoprofen and xylazine
The dose of ketoprofen administered i.p. for mice that caused an analgesic response in half of the mice population was 1.26 mg/kg and for xylazine was at 6.63 mg/kg (Table 1). 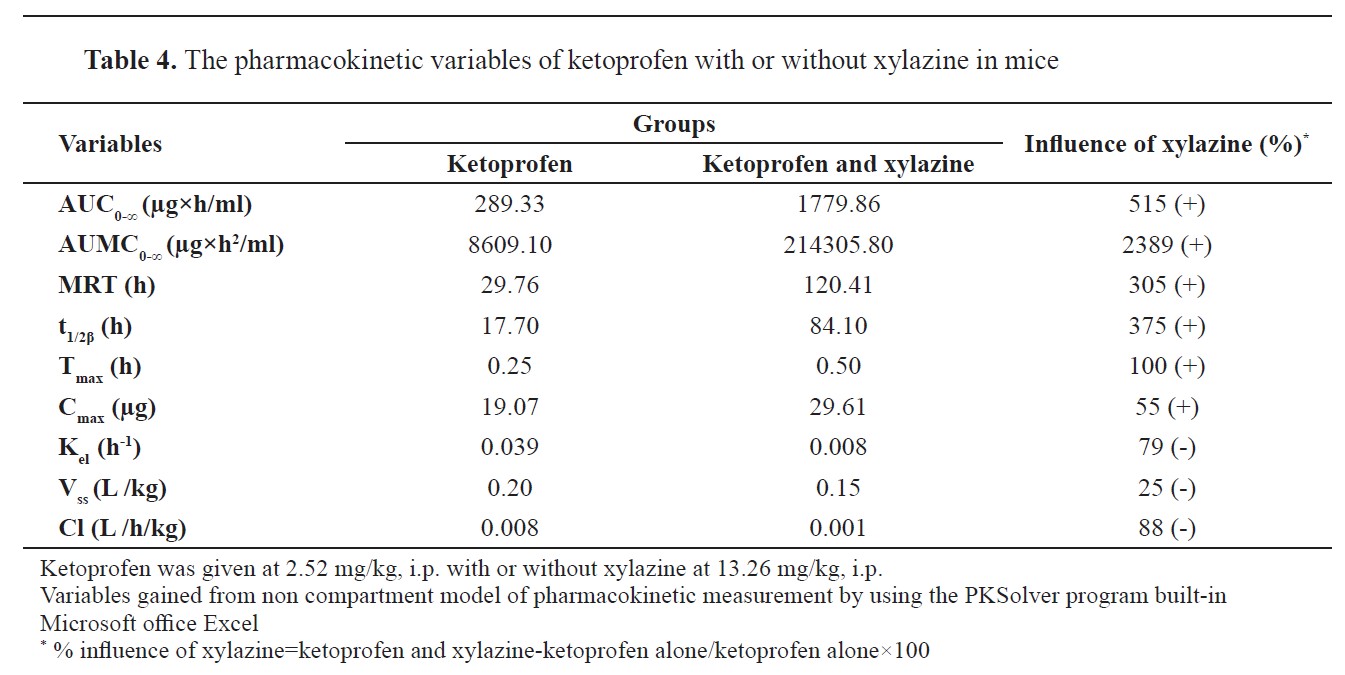 DISCUSSION
The current study aimed to assess the ketoprofen or ketoprofen/xylazine treatment effect on the pharmacodynamic (cyclooxygenase-2 plasma level) and pharmacokinetic properties of ketoprofen in mice. The analgesic ED50 for the ketoprofen and xylazine was in compliance with previous studies in mice (17, 24). Ketoprofen is an NSAID drug having multiple therapeutic benefits in human besides veterinary medicine due to its variety of pharmacological effects as an analgesic, antipyretic, and anti-inflammatory drug (5). These effects are achieved by inhibition of the cyclooxygenase-2 isoform and by stimulating the release of prostaglandin E2 (1, 2, 3, 4). The current study confirmed the effect of cyclooxygenase-2 inhibition. Ketoprofen is considered a drug with high protein content (>99%) (6, 7) which may lead to drug-drug interaction and may influence the pharmacodynamic and pharmacokinetic properties of the combining drugs such as xylazine. This may alter the therapeutic efficacy of the treatment drugs. This effect is exerted by pharmacokinetic interaction on the binding sites of the plasma proteins (interaction at the level of volume of distribution), thus the drug concentration reaching the target site of action (cyclooxygenase-2) is increased. This effect was confirmed in the current study by the significantly lower cyclooxygenase-2 level in the ketoprofen/xylazine group compared to the xylazine treatment group. Ketoprofen is largely metabolized in the liver cells by the cytochrome P450 (phase I) and by glucuronidation (phase II) (25, 26). Additionally, ketoprofen and xylazine pharmacokinetic properties may be affected on the level of absorption and excretion as demonstrated in the current study.


CONCLUSION
Our findings suggested a synergistic effect between ketoprofen and xylazine on the lowering of cyclooxygenase-2 level in pain-stimulated mice (pharmacodynamic interaction). Ketoprofen pharmacokinetic and pharmacologic properties were potentiated in combination with xylazine.

CONFLICT OF INTEREST
The authors declared that they have no potential conflict of interest.

ACKNOWLEDGEMENTS
This research was supported by the College of Veterinary Medicine, University of Mosul.

© 2022 Khalil  K.A. This is an Open Access article distributed under the terms of the Creative Commons Attribution-NonCommercial License (http://creativecommons.org/licenses/by-nc/4.0/), which permits unrestricted non-commercial use, distribution, and reproduction in any medium, provided the original work is properly cited.

The authors declared that they have no potential lict of interest with respect to the authorship and/or publication of this article.