Diffuse cutaneous mastocytosis was diagnosed in a 6-year-old, indoor, neutered female domestic European shorthair cat. Marked pruritus located mainly on the head and neck was noticed in the cat and in this area the animal had developed alopecia, crusts, and plaques. Histologically, monomorphic mast cells were found in the superficial dermis and around the hair follicles. Mast cells were well differentiated, with central nuclei and granular cytoplasm, with metachromatic granules which stained positively with Toluidine blue stain. The animal was successfully treated with oclacitinib at a dose of 1 mg/kg, twice a day per os.

Cutaneous mastocytosis was diagnosed in a 6-year-old, indoor, neutered female domestic European shorthair cat. Four months prior to presentation, a marked pruritus located mainly on the head and neck was noticed. Moderate pruritus was also observed on both lateral aspects of the thorax. In these areas, but especially on the neck, the animal had developed alopecia, crusts, and plaques (Fig.1). Szczepanik M. et al. 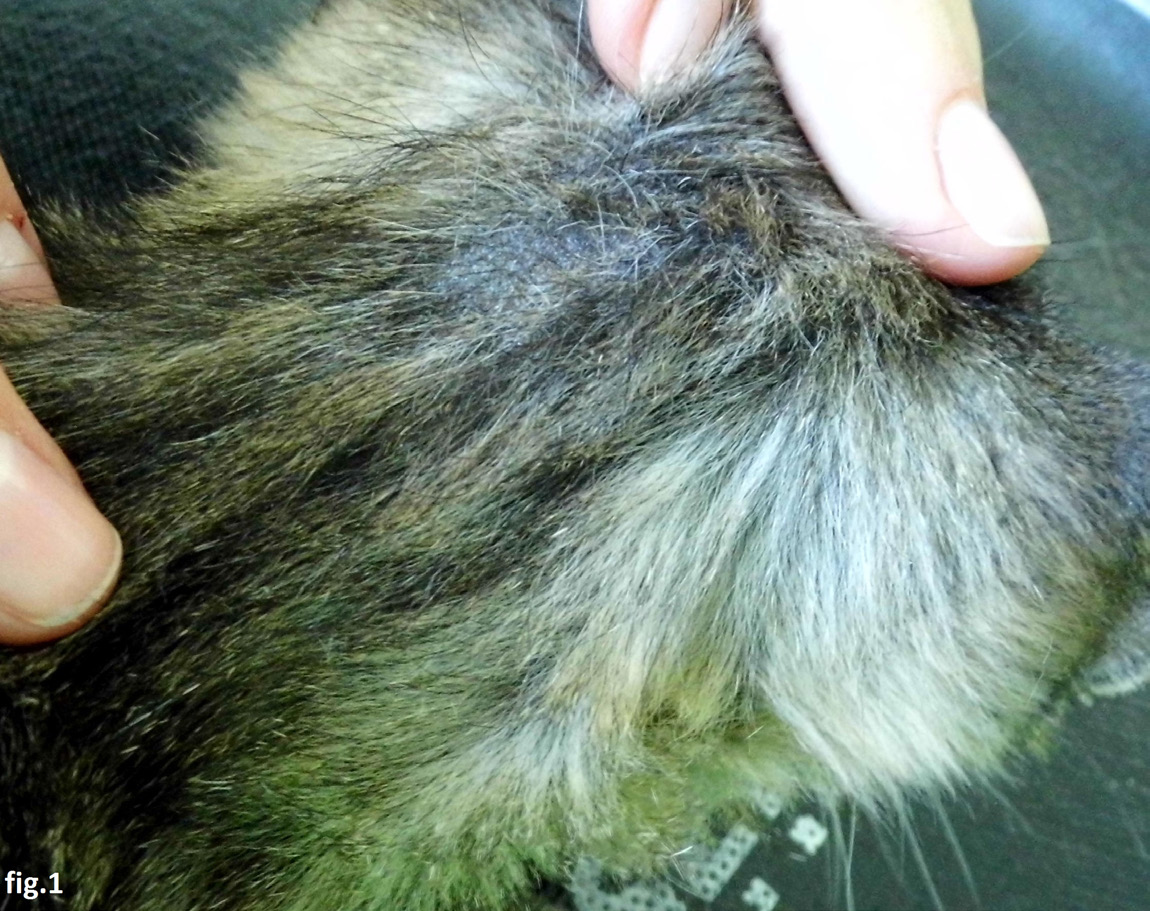 Figure 1. Alopecia, lichenified and thick skin on the neck

There were no symptoms from other body systems, and the cat had no previous history of such symptoms. Therapeutic trials (eight weeks) with a hypoallergenic diet (RC hypoallergenic) did not alter the pruritus or the gross appearance of the skin lesions. Glucocorticoids (prednisolone 2 mg/kg) resulted in a slight decrease of pruritus, but this reduction was not complete. Corticosteroids were discontinued before therapeutic trials with a hypoallergenic diet. Examination with a Wood's lamp, microscopic examination of the hair, skin scrapings, fecal examinations, and fungal cultures failed to reveal any infectious or parasitic agents. Flea bite hypersensitivity was excluded by appropriate anti-flea treatment. On microscopic examination of hair, broken hair shafts were found. No abnormalities were noted in the complete blood count, serum tests, or urinalysis. Ultrasound of abdomen and thorax radiography showed no 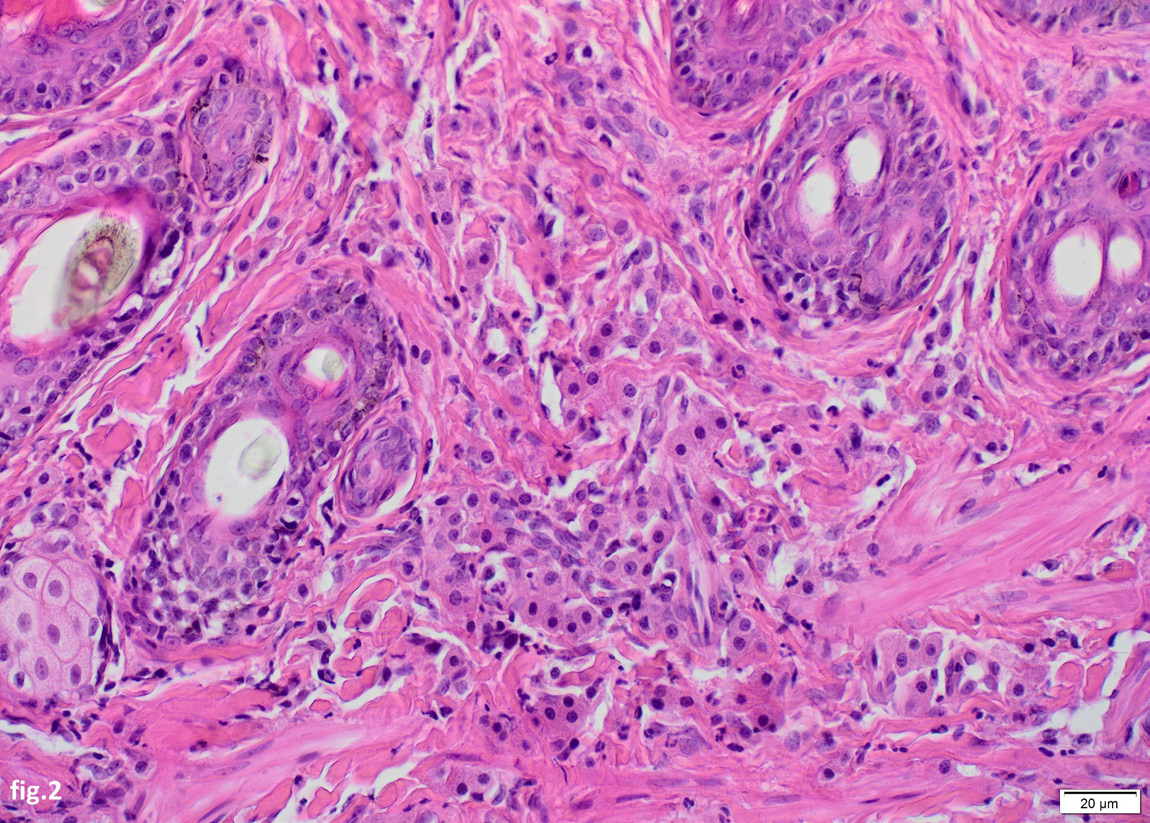 pathological changes. After local anesthesia with 1% lignocaine and sedation with detomidine, one 6 mm punch biopsy was taken from plaques located on the dorsal surface of the neck. The collected sample was stained with hematoxylin and eosin and with toluidine blue. Histologically, monomorphic mast cells were found in the superficial and deep dermis and around the hair follicles (Fig.2).
Eosinophils were not found (the presence of eosinophils may suggest allergic disease or feline eosinophilic granuloma complex). Mast cells were well differentiated, with central nuclei and granular cytoplasm, with metachromatic granules which stained positively with toluidine blue stain. Degranulation with the presence of granules outside the cytoplasm was observed (Fig.3). 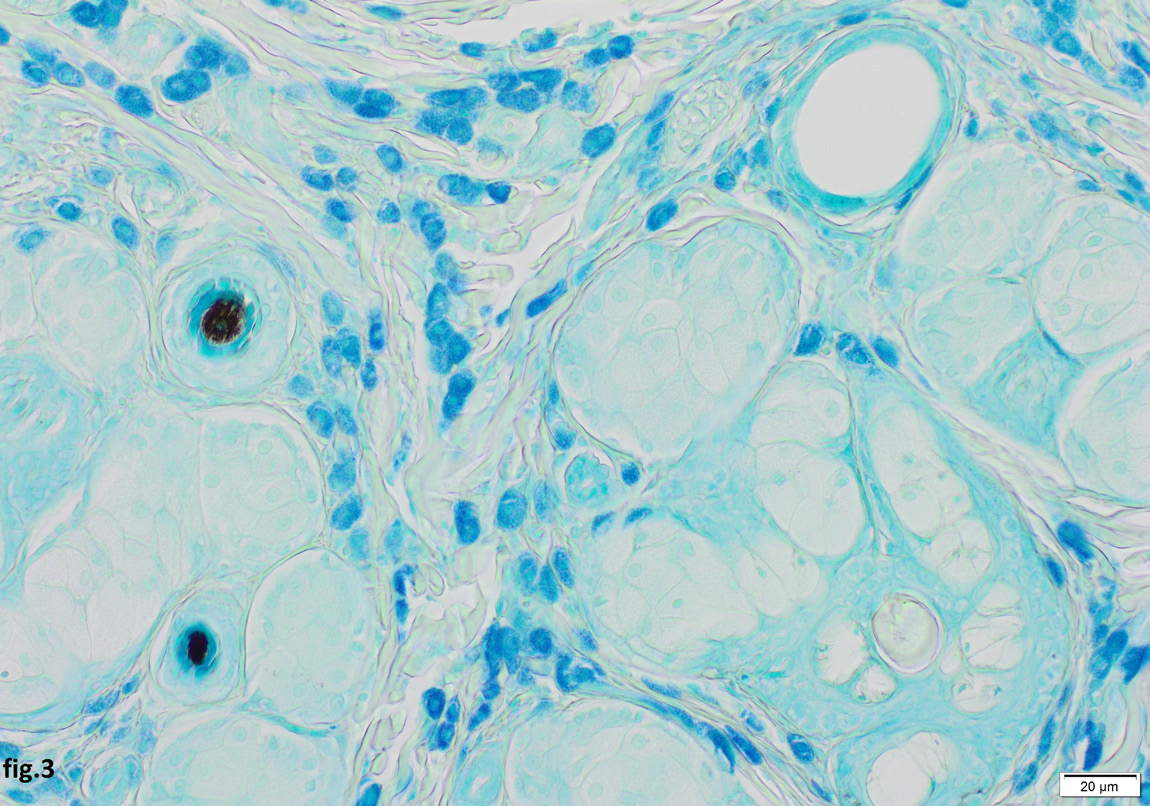 Based on the clinical presentation and histopathological features, cutaneous mastocytosis was diagnosed in this cat. The animal was treated with oclacitinib at a dose of 1 mg/kg, twice a day, per os (5). By the second week of treatment, the pruritus had completely resolved. The lesions healed progressively, while in the second month of treatment the plaques began to shrink and then completely resolved. After complete resolution of lesions oclacitinib was discontinued. The cat has been lesion free for 5 months.

The presented case is a rare form of diffuse cutaneous mastocytosis. In cats, only a few cases of this disease have been diagnosed and published in the literature to date. In the papers published in 1990 by Brown and Chalmers (3) and in 2019 by Tomich and Pieper (4) the cats had intense pruritus, similar to the case described here, while in the case described by Frank et al. pruritus was not observed (5). Perivascular or diffuse mast cell infiltration located in the dermis is seen with this disease on histopathology. Mitotic figures are occasionally seen or are not observed (3, 5). In the paper published by Ngo et al., cutaneous mastocytosis was classified into three clinical forms. These authors distinguished casesas either polymorphic maculopapularcutaneous mastocytosis, or monomorphic maculopapular cutaneous mastocytosis, or pigmented maculopapular cutaneous mastocytosis (6). The case described in the current paper would be classified as pigmented maculopapular cutaneous mastocytosis according to the Ngo et al. classification system.
In the current case, mitotic figures were not observed, likewise in the case presented by Frank et al. (5). Only a few cases of this disease have been diagnosed to date, therefore information about treatments and outcomes are sparse. One cat was successfully treated with the use of oclacitinib, which was also observed in the current case (5). In another case with a similar clinical presentation, oclacitinib was not effective (4). In the first described case of this disease, the cat was euthanized due to unsuccessful therapy with glucocorticosteroids (3).
In cases with a similar clinical presentation, it is extremely important to exclude other crusting dermatoses like dermatophytosis and parasitic infections (for example Notoedric mange, Cheyletiellosis, Pediculosis).
Dermatophytosis as a cause of urticaria pigmentosa (a form of cutaneus mastocytosis) has already been described in Devon Rex cats (7). This atypical form of dermatophytosis in such cats may be the result of the development of hypersensitivity reaction to dermatophyte allergens. The exclusion of fungal infection in the case of urticaria pimentosa (and probably other forms of skin mastocytosis) is extremely important prior to treating this disease, where systemic glucocorticosteroids or cyclosporin may be used, the use of which in the case of dermatophytosis is absolutely contraindicated.

© 2019 Szczepanik M. This is an open-access article published under the terms of the Creative Commons Attribution License which permits unrestricted use, distribution, and reproduction in any medium, provided the original author and source are credited.